Employment in legal occupations plummeted in January to its lowest level in almost four years, with men and women seemingly headed in diverging directions on their way out the door.

According to the Bureau of Labor Statistics’ monthly employment data, approximately 1.72 million Americans reported holding legal jobs in January—representing a loss of 134,000 jobs since December and negating all gains that had been made since April, when the first wave of pandemic-related shutdowns brought total legal employment down to 1.73 million. Not since February 2017 has employment in legal occupations been quite this scarce. 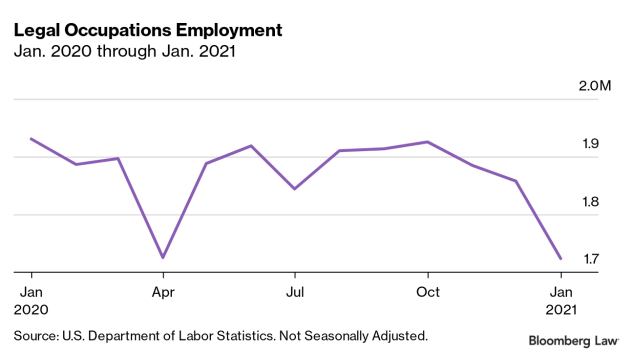 Both men and women experienced large job losses in January, but with a loss of 80,000 jobs, men experienced their biggest decline since December 2016—while women lost a far-from-unprecedented 54,000. Legal employment for men now stands at approximately 813,000, which is itself an almost four-year low.

Such a plunge in employment should be sending workers racing for the unemployment line, and many did: The unemployment rate among workers who reported having legal occupations rose in January from 2.3% to 3.0%, the highest jobless rate since August. 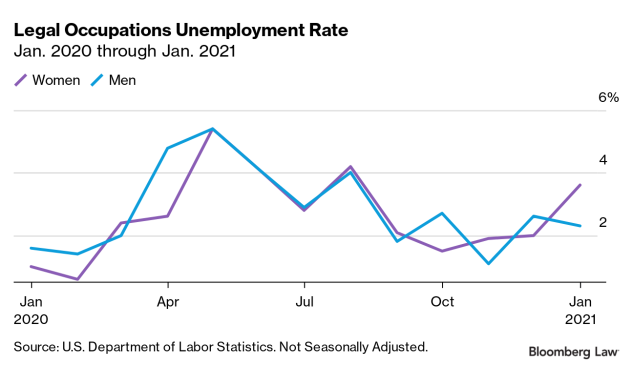 This decrease suggests that, unlike women, men who are leaving legal occupations—either voluntarily or involuntarily—are not sticking around to find another job in the legal field. Whether they are landing jobs elsewhere or staying out of the labor force entirely—perhaps emboldened by their year-end bonus checks—is unclear.

What is clear is that, faced with January’s dire career situation, men and women are making two different sets of new year’s resolutions.