The IPO market bubble has burst, with SPAC IPOs taking the worst of it. Both traditional and SPAC IPOs have suffered gut punches from inflation, rising interest rates, market volatility, geopolitical instability, and a growing recession risk.

IPOs have long enjoyed public support from the SEC, but SPACs and their IPOs have regulators threatening to knock the industry down—and possibly keep it down. That threat was a hot topic at last month’s SPAC Conference 2022.

Back to Reality for IPOs

Like the broader stock market, the IPO market has retrenched. The number of traditional IPOs fell nearly 72%—from 249 IPOs during the first half of 2021 to only 70 for the same period this year. SPAC IPOs suffered an even greater decrease, dropping over 80% from 362 IPOs in the first six months of 2021 to 70 year-over-year in 2022. 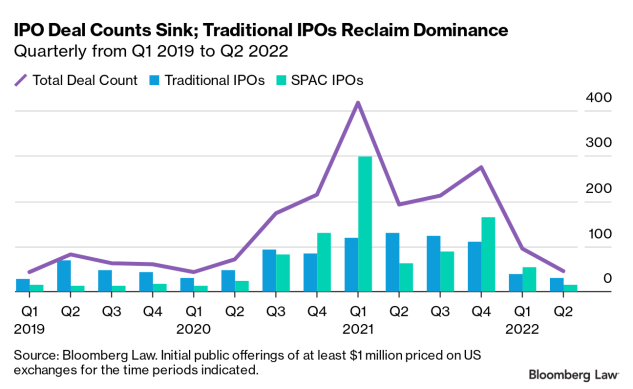 Comparing the same time periods, the value of capital raised declined 94% for traditional IPOs and shrunk over 89% for SPAC IPOs. SPAC results worsened in the most recent quarter, sinking to a mere 15 IPOs raising a paltry 2% of the capital the industry raised in the first quarter of 2021. 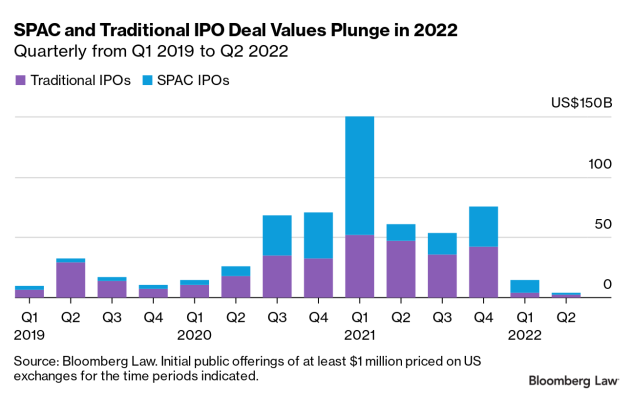 Despite the plunge in deal values, traditional IPOs have managed to regain their pre-pandemic market bubble IPO position as the leading (and less problematic) way for companies to go public.

Polestar Goes Public Via SPAC; Needs a Star to Steer By

Difficult current market conditions are casting clouds over companies that perhaps ought to be regarded as going-public-via-SPAC success stories. Even relatively strong companies going public in this manner have experienced recent bumps.

One such example is Swedish electric-vehicle company Polestar Automotive, which went public June 24 via a public SPAC. Although it’s an actual operating company producing vehicles for what is expected to be a transformational industry and is valued at a whopping $24 billion, its debut was mixed. Polestar’s stock rose 16% on its first day of trading but slid 15% on the next trading day.

Polestar—unlike many companies that have gone public via a SPAC—possesses time-validated qualities such as a genuine operating business, a respected (if expensive) product, and strong future prospects. The tepid investor response to Polestar going public is primarily owing to overall market skepticism and a desire to reevaluate companies in light of the increasing risk of present conditions. Buyers are on strike and reevaluation has replaced irrational exuberance.

A Requiem for SPACs? Backers Plead for Resurrection

Clouds were also noticeable at the SPAC industry’s largest annual conference in mid-June, despite the lush surroundings at the country club in suburban Rye, New York, where the conference took place.

Given the regulatory challenges facing the industry, it’s not surprising that many speakers railed against proposed SEC rules they claim are already damaging their business. As shown in the chart below, the performance of the SPAC IPO market is now essentially on life support—and many conference attendees are feeling the pain. 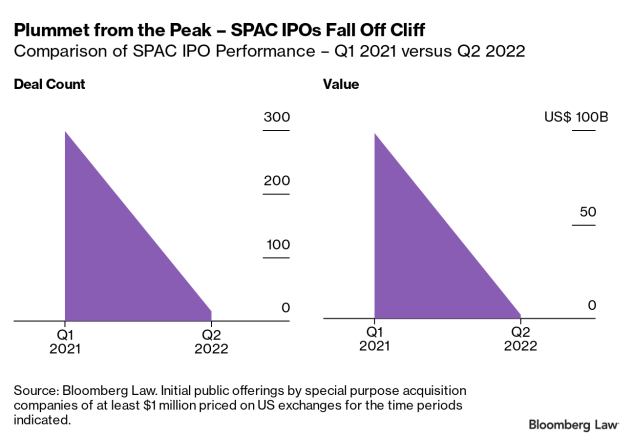 One of the speakers, Douglas S. Ellenoff, a partner in the law firm Ellenoff Grossman & Schole that has long been a leading counselor to SPACs, voiced a core complaint regarding the proposed SPAC rules: They fail to follow the time-honored legal maxim of treating like cases alike. In Ellenoff’s view, the SPAC IPO should be governed under IPO rules, while the de-SPAC or business combination phase ought to continue being processed as an M&A transaction, rather than as a capital markets financing (i.e., like an IPO).

The SEC’s proposed rules seek to treat a SPAC’s second (or de-SPAC) phase as a second IPO. In this second IPO—often referred to as the SPAC target IPO by SEC Chair Gary Gensler—a private corporation will combine with the public SPAC and thereby go public itself. However, going public via a reverse merger with a public SPAC bypasses the usual SEC IPO review process, substituting the different, somewhat more liberal, set of rules designed for mergers. The proposed rules seek to address this detour from the more rigorous IPO regulations by treating de-SPACs much more like traditional IPOs.

Although curtailing SPACs’ use (and sometimes misuse) of projections is likely the SEC’s underlying motivation for many of the proposed rules, the fundamental regulatory issue is that SPACs—specifically SPACs at the de-SPAC stage—are a hybrid and, as such, don’t cleanly fit into either the traditional IPO or the established M&A business combination regulatory frameworks. Regulating the de-SPAC process as if it were a second IPO ignores the fact that post-merger performance projections are a standard disclosure for merger deals that investors expect in order to make informed investment decisions. Treating the de-SPAC like a second IPO also ignores the fact that the SPAC is already a public reporting company.

Still, the SEC can’t be expected to ignore that a private company will become a public reporting company listed on a stock exchange once the merger deal closes. Too many target companies that have gone public via a SPAC over the past few years have proven themselves not ready for the demands. In the race to close a deal before time expires on the SPAC, these deals can be rushed, involve transactions not conducted at arm’s-length, and include projections that have proved to be overly optimistic and without sufficient basis. Sometimes bankruptcy has resulted. The incentives to push a deal through, even a bad deal, are simply too great for SPAC sponsors.

There appears to be room for compromise between the two camps. Use of better-grounded projections and more careful due diligence, along with better alignment of incentives between SPAC sponsors and other investors, will go a long way toward addressing the SEC’s underlying concerns. Ellenoff himself suggested in his conference keynote speech that there remains room for discussion and compromise with regulators, and he implored the SEC to engage with the SPAC industry to find alternative regulatory solutions to the Commission’s proposed rules.

The SEC needs to recognize that projections are normal and expected at the de-SPAC stage. Even if the final SEC rules on SPACs remove the Private Securities Litigation Reform Act of 1995 (PSLRA) safe harbor, the use of projections can still enjoy protection from liability if made with a reasonable basis under the bespeaks caution doctrine. The SEC shouldn’t seek to prohibit all projections, just those made without a reasonable basis.

The most concerning aspect of the Commission’s proposed SPAC rules involves what the SEC describes as a clarification of rules, particularly underwriting rules. Under the clarification, enforcement for rule violations could be retrospective as well as prospective. That prospect has roiled the SPAC industry.

SPAC Conference speakers like Ellenoff are rightly unsettled by the SEC using this language because it connotes that actors should have been conforming to this interpretation all along. Since SPACs have been around since 1993, issuing clarifications of the rules governing their conduct that contradict in essential ways how the SEC has regulated SPACs for all those years feels unfair.

This interpretation also feels disingenuous. The SEC claims that proposed new Rule 140a would “clarify” that an underwriter in a SPAC IPO is also liable for most later financings—whether the underwriter participates directly or indirectly. The transaction would be treated as a distribution of securities of the surviving public entity in a de-SPAC transaction within the meaning of Section 2(a)(11) of the Securities Act.

The market knows that the SEC has very wide latitude in calling a transaction a distribution of securities, but this isn’t how the market has long understood, and the SEC has regulated, de-SPACs. The de-SPAC has been treated as a merger between two companies, not as a public offering of securities since no securities of the target are being sold and the target corporation is neither a control person nor a promoter.

A better approach would be for the SEC to be more transparent about the proposed rules. This might entail acknowledging that the more stringent SPAC rules are a substantial change both from current industry practice and the stances of past Commissions, but that the intent is to discourage certain SPAC behavior to improve investor protection (rather than the current implication that most everyone has been breaking the rules for many years). Basic fairness dictates that new rules should never apply to past conduct.