The insatiable appetite for U.S. SPAC IPOs may finally have reached its limit. It is not that investors have suddenly turned sour on blank-check companies. Rather, broader economic concerns, combined with the investment and insurance industries’ own limits on SPAC exposure, are producing a market pause and a trend toward increasingly discerning investing. 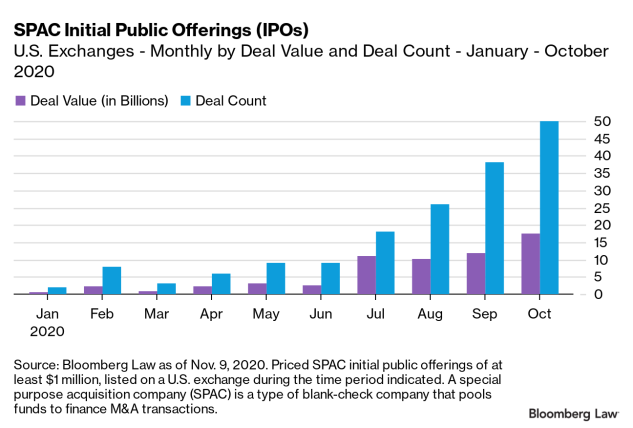 Initial public offerings for special purpose acquisition companies (SPAC IPOs) have enjoyed a remarkable run in 2020. Through Nov. 6, 170 SPAC IPOs have priced on U.S. exchanges, raising an incredible $62.8 billion. October has been a rough month for SPAC performance — but not in terms of the number of SPAC IPOs and capital raised by them. October set a record on both counts, raising nearly $17.5 billion on 50 offerings. Look more closely at the market, however, and warning signs are flashing.

The U.S. stock market has been supported during this pandemic and economic downturn by two federal government efforts: the Federal Reserve’s stimulus efforts as well as Congressional programs designed to mitigate the negative economic effects incurred by Covid-19 and measures to contain the virus. Federal unemployment benefits have been extended until the end of the year, but the CARES Act bonus of $600 a week expired in July.

The market experienced volatility jitters in October, reflecting worries about the election and the lack of more Covid-19 relief from Capitol Hill. The value of publicly traded SPAC companies dipped during the month before recovering in November as election uncertainty receded. The graphic below illustrates the steady decline in the Defiance NextGen Derived SPAC ETF during the month. For example, one SPAC that has been extremely popular, DraftKings Inc., fell 40% in October. Although its share price has since recovered somewhat, it remains well below its post-merger high. 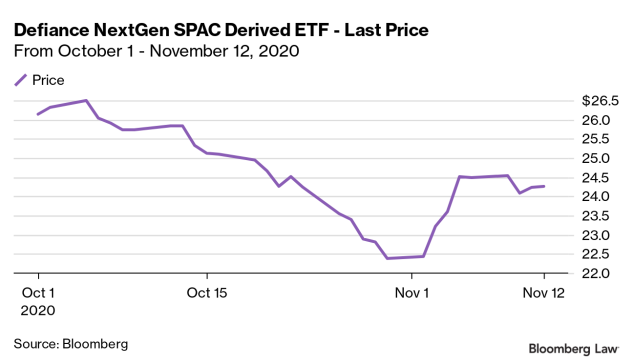 Prospects for pandemic relief appear dim under the current administration. Negotiations between Republicans and Democrats in Washington since July have yielded no new stimulus and President Donald Trump has little incentive to assist in moving a relief package through the Senate during his remaining term in office.

Pipeline for SPACs Slowing Down

Bloomberg reports that filings for new SPAC IPOs peaked in September and declined substantially in October. It also reported that roughly 60% of October listings are trading below their offer price, despite the capital raised in public offerings being held in trust. This slump is an indication of nervousness among investors about SPACs’ future prospects. The same phenomenon surfaced in February, when the seriousness of the coronavirus began to sink in with investors until government stimulus efforts came to the rescue.

Another indicator that investors are becoming more discerning is in the number of SPACs that downsized their offerings in October. From January through September, only two out of 120 companies were pressured into downsizing their offerings. In October, seven of the 50 SPAC IPOs shrunk their deals.

There are limitations on just how much the market can digest when it comes to SPAC IPOs. Certain institutional investors have restrictions on their level of SPAC exposure, and some have reached their internal limits.

An important constraint affecting all SPAC IPOs is the price and availability of SPAC Directors & Officers (D&O) insurance. This type of insurance is essential to protect against potential claims and attract top talent to sit on SPAC boards. Yelena Dunaevsky of insurance brokerage and consulting firm Woodruff Sawyer reports that market demand for this type of insurance has soared, along with premiums, while coverage has constricted. Premiums in October were as much as $1.5 million for a $20 million policy, and generally two to three times higher than the rates charged in August.

The number of insurers writing these D&O policies is small (only about five or six carriers), and they have been deluged with requests. These insurers are approaching their annual limit, so this will probably contribute to a continued SPAC IPO slowdown for the rest of 2020.

Beyond those factors, the rise in SPACs has also upgraded their profile as a potential target for litigation. That prospect is contributing to the increase in D&O insurance premiums.

This cooling-off period appears likely to be more a pause that refreshes rather than the start of a sustained downward trend. The market is already showing early signs of trending up from October lows, and Democrats have Covid-19 relief and more stimulus high on their agenda. If past is prologue, Senate Republicans may force Democrats to scale back their Congressional ambitions, but some type of targeted aid seems likely to pass in early 2021. Investors are likely to be more discerning and relatively risk-off until the federal government acts.

The mergers and acquisitions space has been a competitive market for targets for some time, with 2020 activity initially subdued compared to 2019. Now comes a flood of newly public SPACs, loaded with a war chest of dry powder from their initial public offering and a two-year, use-it-or-lose-it ticking clock. Newly public SPACs (those eager to find a target and make a deal) are frequently reacting to the stiff competition for desirable targets by going after earlier stage companies. This competition dovetails nicely with SPACs’ hunt for growth that outpaces the market. If a SPAC’s managers can identify trends and early stage companies that can disrupt markets, they can potentially ride those trends to far greater returns than what would be achievable from safer investment opportunities.

The current combination of these temporary factors — constrictions in D&O insurance for SPACs, limitations on additional SPAC share purchases by some large investors, uncertainty about the efficacy of the presidential transition and the leadership of the U.S. Senate, and a resulting cloud over the size, scope, and timing of any additional pandemic relief package — ought to continue to slow the boil of the SPAC IPO market until at least late January.