It turns out that most lawyers working on mergers and acquisitions deals aren’t happy with the contract drafting process. When it comes to law firm M&A lawyers, it’s a given that everyone wants to do more deals. And even though law firm lawyers already hold the pen for the bulk of deal contracts and documents, they would prefer to take on more drafting responsibilities from corporate counsel. But it’s not just the outside lawyers who want more: Some of the in-house lawyers who hire them aren’t happy with the current division of drafting labor, reporting that they want increased drafting responsibilities vis-à-vis external counsel.

The results of Bloomberg Law’s M&A Deal Insights 2020 survey offer a view into how work is assigned to in-house and external deal teams — and how they feel about it. More than half of respondents reported that they are not comfortable with the division of labor for drafting principal agreements in M&A deals. Even so, there do seem to be a few general points of agreement among law firm and in-house counsel about the drafting work that each are happy to let the other handle.

Bloomberg Law surveyed 138 law firm and in-house attorneys who spend at least 20% of their time on M&A work. Of these, 48% reported that they spent more than half of their time drafting, revising, and/or negotiating M&A transactions in the past six months. The survey asked which parties or advisors had typically been tasked with creating the first drafts of certain categories of contracts and documents in M&A deals they’ve worked on during the past 18 months.

The results indicate that law firm counsel on the buyer’s side dominate drafting in most parts of the deal process. Buy-side law firm lawyers were most frequently reported to typically take the lead on all of the tasks addressed in the survey. And buy-side in-house counsel were the second-most reported to typically take the lead on three of the tasks: drafting term sheets, due diligence request lists and checklists, and agreements relating to post-closing integration. Overall, combining law firms and corporate counsel, sell-side counsel were reported to hold the pen on fewer categories of documents and at a much lower rate than buyer counsel. 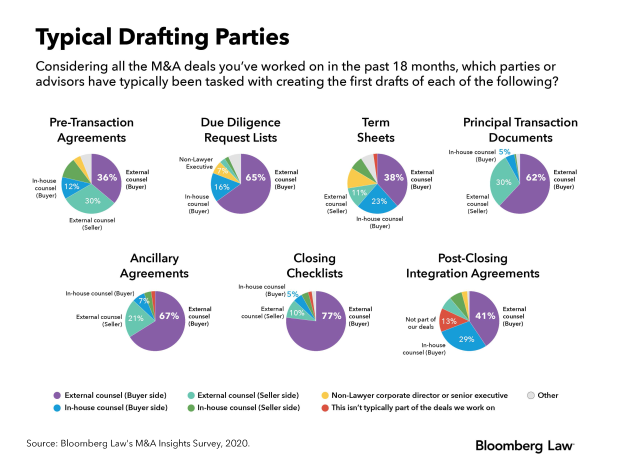 Buy-side in-house counsel were tasked with drafting agreements relating to post-closing integration just under one-third (29%) of the time; with drafting term sheets 23% of the time, and with due diligence request lists and checklists 16% of the time. In addition, 13% of respondents reported that integration was not typically part of the deals they worked on.

As far as sell-side law firm counsel are concerned, when they do hold the pen (which is less often than their buy-side counterparts), it is typically to draft pre-transaction agreements (e.g., non-disclosure agreements, exclusivity agreements, confidentiality agreements); principal transaction documents, and ancillary agreements. In each of these categories, they received the second-highest marks behind law firm buyers’ counsel.

In addition to asking about who typically drafts various categories of M&A deal documents, the survey asked lawyers whether they feel that law firm or in-house counsel should be handling the drafting in these categories. 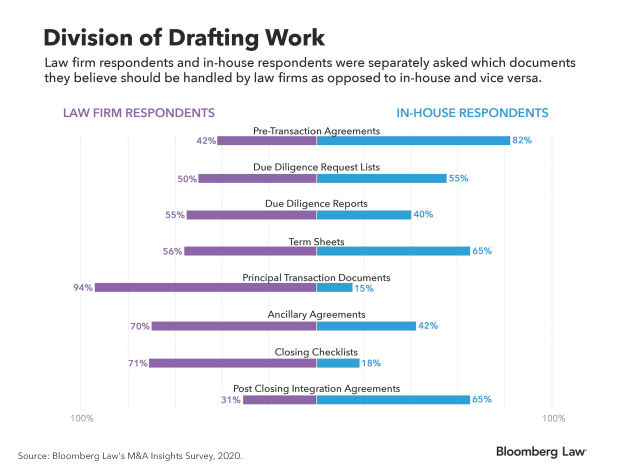 The responses to these questions, taken together with the responses regarding who typically holds the pen, indicate that law firm and in-house counsel generally appear to be content with law firms handling the drafting of principal transaction documents and closing checklists. And in the vast majority of deals, law firms do so. The results suggest that these tasks — which are time-consuming, involve a dedicated deal team, require attention to detail, and benefit from specialized M&A expertise — are a driving force behind why companies hire law firms in the deal process.

It deserves mentioning, however, that 35% of in-house respondents indicated that they would prefer to do more or all of principal transaction document drafting. It could be that there are many in-house lawyers and teams that are more than equipped to handle the drafting of the principal transaction documents, but they may need external counsel for other deal support and their external counsel prefers to hold the pen. In-house counsel’s workload or staff level may also prevent them from doing the work even if they prefer to.

There also seems to be alignment between the typicality and preferences of law firm counsel and in-house counsel on in-house counsel drafting post-closing integration agreements. In this area, 29% of respondents reported that these agreements are typically drafted by buy-side in-house counsel. These results make sense, considering that the buyers’ internal lawyers will, in the case of a merger or takeover, be living on with the target in the new combined entity and thus be in the best position to manage issues pertaining to integration of the entities after the closing.

The results also reveal categories of documents where there appears to be a disconnect between the preferences of the parties and the reports of who typically holds the pen.

These points of disconnect may signal that there is tension, either out in the open or bubbling under the surface, between in-house and law firm counsel over who should hold the pen in these categories of documents.