My fellow Americans, the State of the Unions is: Mixed.

On one hand, management-side observers can look at 2018’s year-end statistics and be cheered by:

This wrap-up draws from Bloomberg Law’s Labor Data to identify five major measurements of labor strength—membership, organizing, wages, unrest, and internal pressures—and analyze how unions fared in 2018 in relation to their past performance.

More than 14.7 million Americans identified themselves as labor union members in 2018, according to Census data analyzed by Bloomberg Law. That’s slightly lower than 2017’s total of 14.8 million. But overall, labor’s ranks have stayed stable throughout this decade. Union membership has hovered in the 14-million range every year since 2010, with 2018 fitting in with the fourth-largest total.

It’s only when we zoom out that the general theme of labor’s overall decline becomes clear. Union membership typically registered in the 15 millions during the 2000s, in the 16 millions in the ‘80s and ‘90s, and even higher before that. Put all those decades together, and they depict a gradually but steadily diminishing roll call on the labor side. 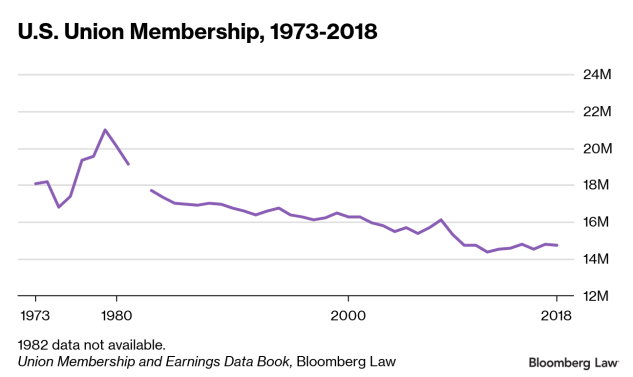 Making matters worse for unions is the fact that the U.S. labor force keeps growing, even while the pool of actual labor members does not. For that reason, union density—the percentage of U.S. employees who belong to unions—has declined at a faster rate than total membership.

It’s worth noting that the scope of labor’s strength extends beyond mere membership. After all, union contracts represent bargaining units, and some in those units who may not actually be card-carrying union workers. If this wasn’t a well-known fact in the past, it certainly has become so in recent months, as the U.S. Supreme Court, the National Labor Relations Board, and some state governments have tackled the question of whether unions should be allowed to compel non-members to pay certain fees in exchange for their representation.

So let’s talk overall coverage. The number of non-members who are covered under union contracts has stayed relatively constant over time. In 2018, about 1.6 million nonunion workers claimed union coverage, up slightly from 2017 but roughly the same as 10 or even 20 years ago.

As a percentage of the growing workforce, however, union coverage lost further ground in 2018. Only 11.7 percent of workers were covered under union contracts, a new historical low point that’s down from 11.9 percent in 2017. 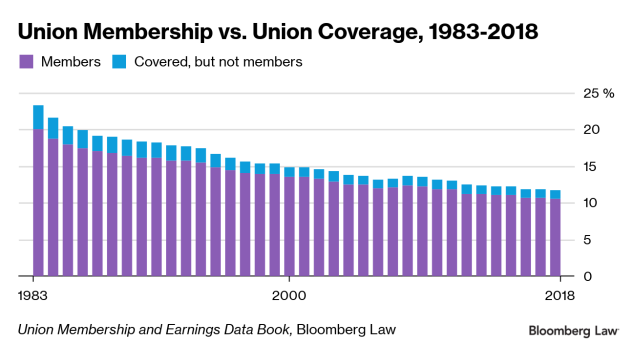 The National Labor Relations Board oversaw 1,171 union representation elections in 2018, an all-time low since Bloomberg Law started analyzing NLRB records. Since the NLRB is the official gateway to union status for private-sector workers, that means labor is losing major chances to regain its share of the workforce. 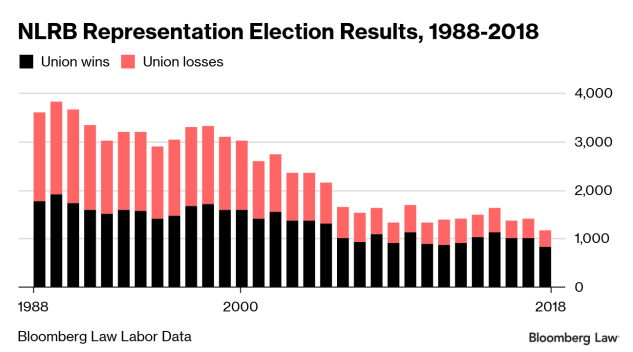 The dropoff itself is not necessarily the work of the board or anyone else; it’s primarily another symptom of the general downturn in labor headcount. Workers submitted only 1,585 total petitions to the NLRB seeking a representation election, which was a historical low point as well. Fewer petitions means fewer elections.

But here’s the interesting thing: What union elections are lacking in quantity, they are making up for in quality. In other words, they’re winning.

For the third year in a row, unions won better than seven out of every 10 representation elections that they held under the supervision of the National Labor Relations Board. They had never enjoyed a 70 percent win rate in any of the decades prior.

In all, the NLRB certified 827 new union locals in 2018, leading to the organization of 51,578 workers. Again, these are historically low totals. But they could have been much worse for unions if not for their success when the votes are counted: a win rate of 70.6 percent of elections, organizing 67.2 percent of all eligible workers. 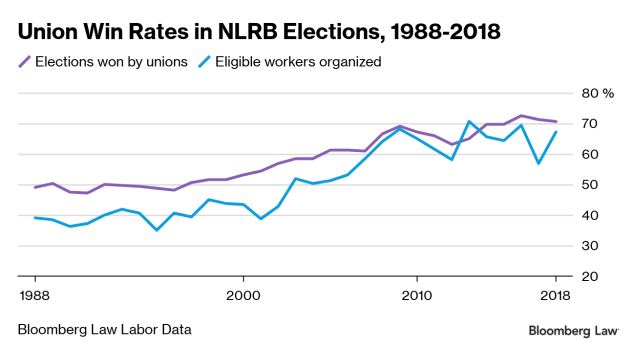 In 2018, union members earned an average hourly wage of $29.58, which is just three cents shy of an all-time high. (The highest average was $29.60 in the previous year.) By comparison, earnings for nonunion workers reached only $25.58 per hour on average, or about 86 cents on the union worker’s dollar.

These figures, from Bloomberg Law’s analysis of Census data, show that union earnings have risen steadily over the years and indicate no signs of a change in that trend.

But for labor, there still might be cause for concern. That’s because nonunion earnings in recent years have been rising at about twice the pace of union earnings. From 2010 to 2018, for example, nonunion workers’ hourly earnings grew by more than two dollars—while those for union workers rose by less than one. Indeed, the pay gap between union and nonunion workers has never been narrower. 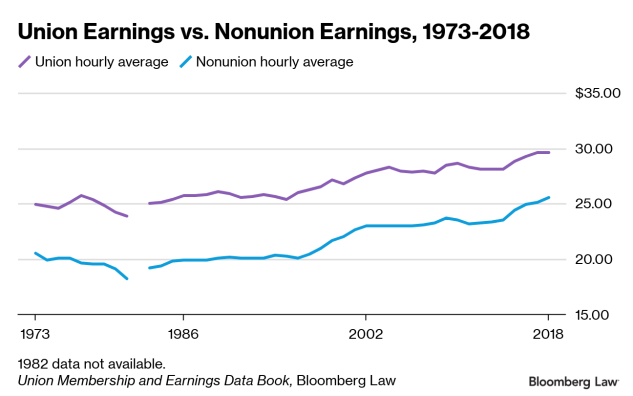 If there is hope for unions to regain monetary momentum, it will have to come at the bargaining table. And, luckily for them, that’s exactly what’s happening, based on Bloomberg Law’s database of wage settlements. As with their performance in NLRB elections, unions are getting quality wins where it counts.

Unions negotiated an average first-year wage increase of 3.4 percent in 2018, up sharply from 2.7 percent in 2017. That made 2018 the most lucrative year for labor since the Great Recession. The one-year jump in pay raises from 2017 to 2018 is the largest in almost 30 years.

The data—from more than 800 collective bargaining agreements that were added to the database in 2018—also show that the inclusion of lump-sum payments boosted the average first-year increase to 3.6 percent for all of 2018—also a post-recession high point. Lump-sum payments include ratification bonuses, stipends, or other one-time payouts. 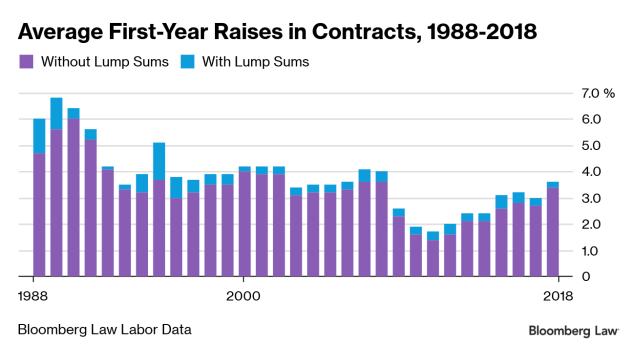 Unrest: A Reawakening of Picket-Line Power

The bargaining table isn’t the only arena where unions are flexing some newfound muscle. There’s also the picket lines.

Union locals called 155 workplace strikes in 2018, up dramatically from 134 the previous year and the largest yearly total since 2012, according to Bloomberg Law’s database of work stoppages.

Granted, this is a far cry from just 15 years ago, when strikes typically occurred at a rate of once per day. But consider how far labor unrest had diminished as a leverage tool over time. In 1990, when Bloomberg Law started tracking work stoppages, unions called more than 800 strikes. 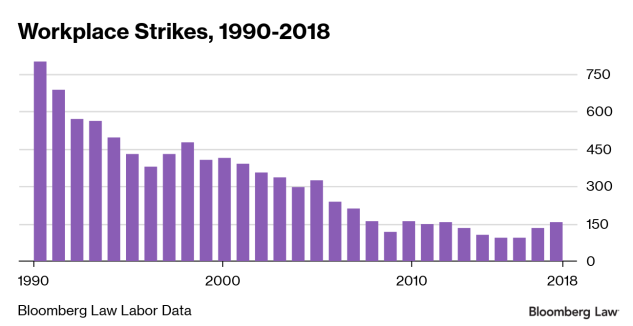 With that in mind, the fact that strike activity has grown by 67 percent in the past two years is an unavoidable sign that unions are looking to keep regaining some of that lost power.

Of course, work stoppages are a leverage tool that can be wielded by management as well as labor. And in 2018, management did just that, at the highest rate in five years. Unions faced 12 workplace lockouts in 2018, up from 9 the previous year and the second-highest total since 2006. 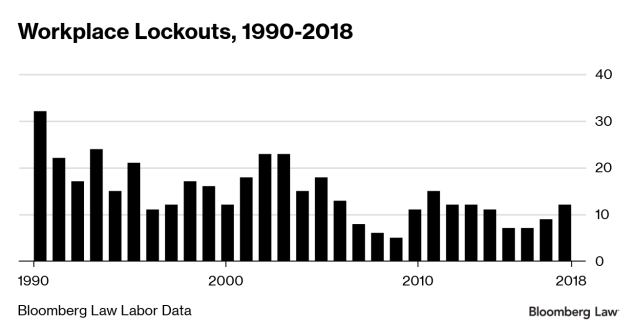 Sometimes, a quiet year can be a good thing for unions, statistically speaking. Take decertification elections.

Unions faced 167 NLRB-sanctioned decertification elections last year, down from 187 in 2017 and matching the all-time low reported in 2016, according to Bloomberg Law’s analysis of NLRB records.

Decertification attempts, in which union-represented workers petition to the NLRB to leave their locals, have been steadily declining over the decades—a statistical flip side to the corresponding drop in organizing efforts.

As for results, unions were decertified in 104—or 62.3 percent—of those 2018 elections. That looks like a big number, but actually, it was a relatively good year for labor. The number of losses was the second-lowest total on record, while the decertification rate was down from 2017 and middling for the last decade in general. 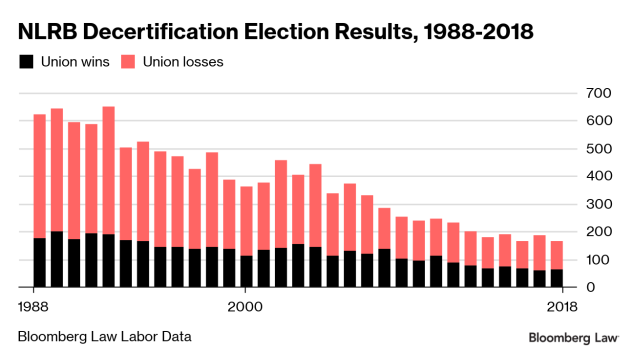 Finally, another revealing statistical lull can be seen in the NLRB’s count of unfair labor practice charges against unions.

ULP complaints filed by unions against employers are much more common and better known—think “Scabby the Rat” balloons and Supreme Court cases—but the board quietly tracks complaints lodged against unions as well. These are typically filed by individual members against their own locals, alleging an unwillingness or failure to represent them in a grievance. (Very few make it to the decision-making stage.)

In 2018, unions were hit with 3,511 ULP complaints, the lowest total since Bloomberg Law started tracking the NLRB’s records in 1998. As with decertifications, this trend could be seen as simply a by-product of a shrinking pool of organized labor. But there’s no denying that it points to a universal easing of internal pressures on union leadership as it seeks to right its ship in the organizing arena. 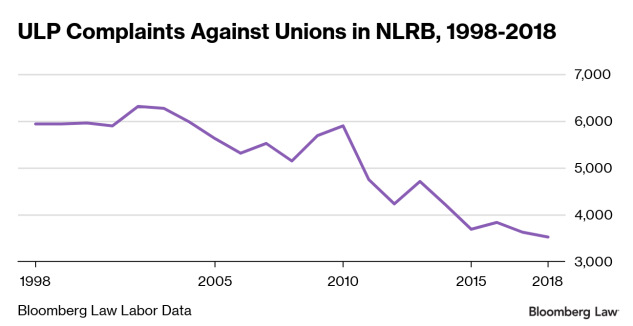 In the months to come, Bloomberg Law will drill down further into these metrics, showing which industries, unions, companies, and locations are winning and losing in the labor-management universe. Most of these statistics are updated regularly in Bloomberg Law’s Labor PLUS Navigator, where subscribers can access, analyze, and filter the data to produce customized reports.