In the last year, human rights and social issues were the most frequent subjects of SEC 14a-8 shareholder proposal no-action letters, with a total of 52, according to a Bloomberg Law data analysis of requests to the commission’s Division of Corporation Finance.

Environmental issues come in a close second at 42. While traditional governance topics were still among the top issues, there was a significant drop off. For example, executive compensation was the topic of only 21 no-action letters. This indicates a shift in shareholder focus during the last year away from some of the more common governance topics toward environmental and social issues. 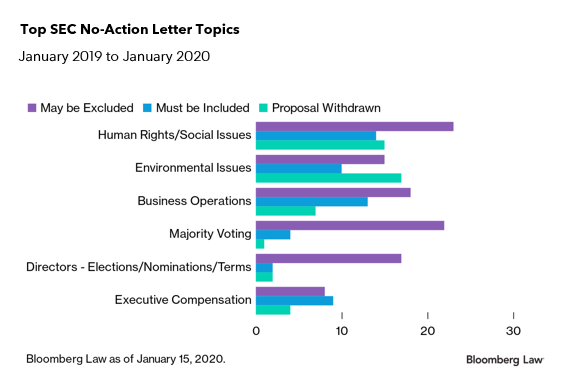 Currently, the SEC does not have any ESG reporting requirements or standards. However, based on the no-action letter totals, shareholders may be using the proxy proposal process to encourage corporate engagement on these matters.

Interestingly, there was a higher rate of withdrawn proposals for human rights/social issues and environmental issues than for the other top topics. For example, 29% of the human rights/social proposals and 40% of the environmental proposals were withdrawn. These numbers are significant when compared with business operations (18%), majority voting (4%), directors - elections/nominations/terms (10%), and executive compensation (19%). This may indicate increased engagement or negotiation between the companies and their shareholders on these topics.

Two of the eight no-action letter requests for exclusion so far in 2020 have been on environmental issues.

In the first, Newmont Goldcorp Corp. requested a no-action response from a shareholder proposal requesting that the company’s senior management, with oversight from the board of directors, issue a report “describing if, and how, the company plans to reduce its total contribution to climate change in the long term.” This proposal was withdrawn before the SEC issued a response.

In the second, NorthWestern Corp. requested a no-action response from a shareholder proposal requesting that it “cease coal fired generation of electricity from [a plant] and replace that electricity with non-carbon emitting renewable energy” by 2025. The division has not issued a view on this request pending litigation.

Veta Richardson, president and CEO of the Association of Corporate Counsel (ACC), recently wrote an article emphasizing how climate change adds volatility to more industries. Because of this volatility, investors are focusing more on ESG risks.

This graphic reflects requests where the SEC’s Division of Corporation Finance issued a written response letter from January 2019 through Jan. 15, 2020. The division no longer issues a written response to every request, but a complete list of no-action letter requests can be found here.

With assistance from Peter Rasmussen and Conor MacCaffrey.