An unlikely champion has stepped up to drive the initial public offering market: Special Purpose Acquisition Companies. Confidence in SPACs has been fueled by some very successful de-SPACing deals—deals by which private companies go public via a reverse merger with a SPAC. Once derided and dismissed because of their shady past, SPACs, as an M&A and finance tool, have shone during these troubled times.

SPACs are an investment vehicle in search of an investment opportunity. They are shell or blank check companies, often sponsored by experienced private equity managers, that promise investors they will find an attractive merger or acquisition target within 24 to 36 months. The reverse merger with a target corporation is when a SPAC “de-SPACs.”

Why This Is the Right Moment for SPAC IPOs to Shine

The Covid-19 pandemic and the economic downturn have made traditional sources of corporate finance unavailable or in short supply. They also drove traditional IPO investors to be more risk-averse before federal stimulus began to support the market. As investor appetite waned for traditional IPOs, the market recognized that SPACs offer an alternative that addresses some key pain points. Some private companies turned to already-public SPACs, sitting flush with use-it-or-return-it cash from an IPO, to simultaneously meet funding needs and become a public company.

Private companies that might have been considering a traditional IPO started to give strong consideration to the SPAC path because the merger process is substantially quicker, taking only a few months, as opposed to up to a year if a company follows the full traditional IPO process. The process also avoids the often intense scrutiny provided by the SEC, analysts, and investors that have tripped up some high-profile unicorn IPOs (e.g., Groupon, Uber, WeWork).

Boom Times for SPACs in a Bust Economy

Turbulent markets can be incredibly profitable for the trading desks of investment banks like Goldman Sachs and JP Morgan, which posted very strong Q2 numbers. By contrast, volatility tends to burn up all the oxygen in the IPO market, causing deals to evaporate. Those past markets were overwhelmingly comprised of startups pursuing traditional IPOs. 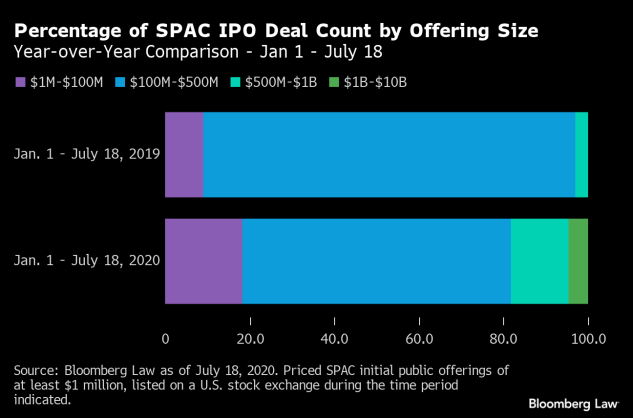 This year so far, however, SPACs have accounted for about 30% of the IPO market by both deal count and deal value. And they are increasingly raising more dollars per offering. 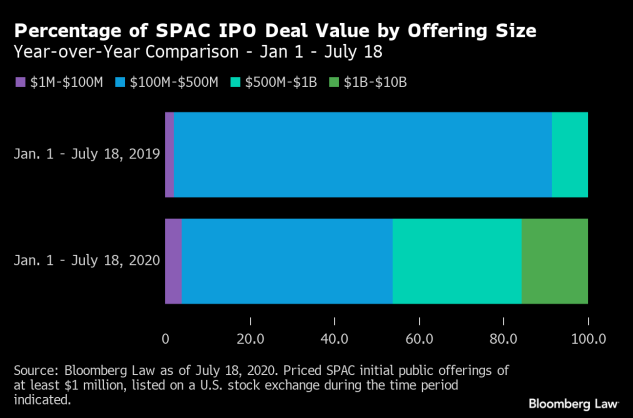 SPAC IPO Performance On a Par With Traditional IPOs 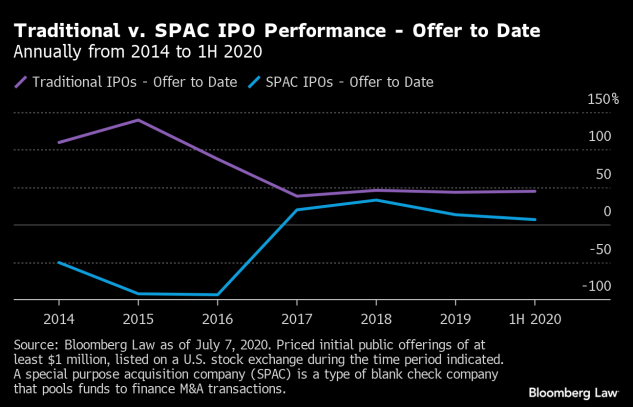 SPACs that went public in 2019 are up 14.53% to date (July 22), while this year’s SPAC IPOs are up 10.96% so far. For comparison, consider that the S&P 500 has returned 1.40% year-to-date (July 17) and has a one-year return of 5.39%. The highly publicized successes of some SPACs finding and consummating very profitable acquisitions for SPAC IPO investors is bolstering the SPAC IPO market and propelling it to new heights.

De-SPACing is the essential third step in the life of a SPAC. After taking the first step of going public, a SPAC then looks for an attractive target for a business combination. Once a target is found and the deal is approved by shareholders, consummation of a reverse merger with a target corporation completes the third and final step. SPAC investors retain the right to opt-out of any proposed business combination by redeeming their units if the deal looks unappealing. Most deals go through with few or no redemptions. 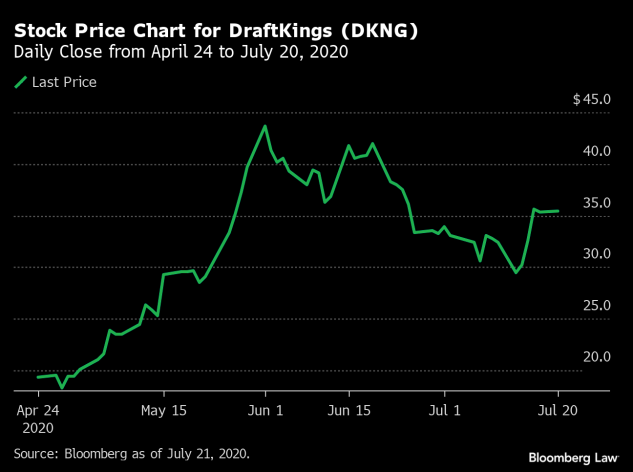 Over the past year, publicly traded SPACs have been enjoying some notably well-received de-SPACing deals. One such de-SPACing led to the NFL-supported online e-casino gaming provider DraftKings becoming a public company.

In May 2019, a SPAC IPO by Diamond Eagle Acquisition raised $350M on units priced at the standard $10. It later struck a deal to acquire DraftKings. On the combined business’s first day of trading on April 24, shares traded at around $20.

Less than two months later, the stock reached an intra-day high of $44.79 in June, a nearly 450% increase in 13 months. The tremendous returns realized by investors have created quite the buzz for DraftKings, for online gaming, and for SPACs, whetting the appetite of IPO investors for more SPAC offerings. 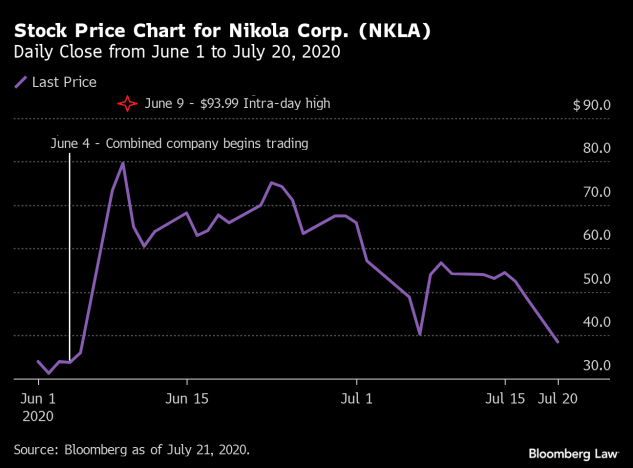 Nikola represents another de-SPACing success, at least initially. The electric truck start-up accepted a deal to merge with public SPAC VectoIQ Acquisition and quickly built a market cap comparable to the venerable Ford Motor Company. After closing the merger on June 3, shares of the combined company began to skyrocket, hitting an astounding intra-day high of $93.99 on June 9, merely the fourth day of trading for the combined companies. Subsequent allegations of fraud by the founder have since more than halved that, but not before the company and its stock gained the widespread attention of investors.

The benefits of SPACs may someday allow them to challenge the dominance of traditional IPOs over the IPO market. That day now appears closer than many would have thought only months ago.