SPACs have come to a crossroads. SPAC IPOs are on pace this quarter to raise about $2 billion on 18 registrations. If that forecast holds, it will represent a staggering decline of 94% (from 299 to 18) in the number of new listings from the record-setting first quarter of 2021, and a dive of 98% (from $98.3 billion to about $2 billion) in the value of SPAC IPOs.

Worse, in response to numerous complaints against special purpose acquisition companies, the SEC has proposed harsh new rules that, if adopted, have the potential to effectively put SPACs out of business.

How might SPACs have done things differently to avoid their current, dire circumstances—and, more important, what can they do now? One possible future niche for the industry is that SPACs may provide a back-up for when a company is not quite ready to go public, as was the case with WeWork. 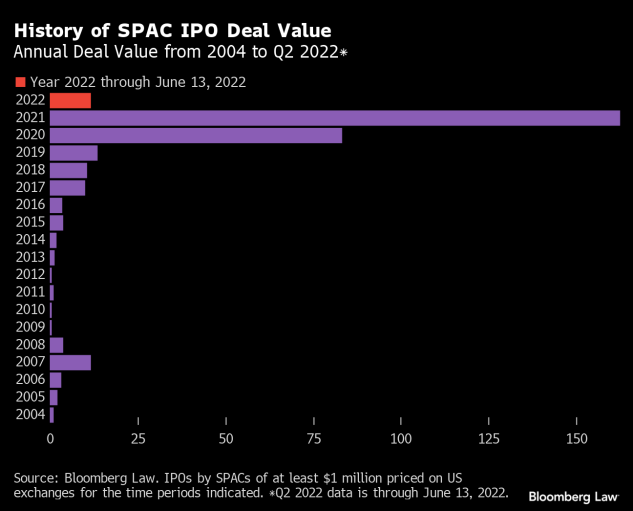 In the film “X-Men: Days of Future Past,” a character goes back in time to alter someone’s behavior so that a destructive event doesn’t occur. But changing SPACs in the past wouldn’t change the current negative market environment battering the SPAC market, both at the IPO and M&A stages.

The reason is because the economic forces are largely macroeconomic in nature and hence are outside the control, or even influence, of the SPAC industry. Inflation, rising interest rates, the removal of government pandemic support for the economy, and geopolitical conflict have combined to cause the worst start to a year for stocks in five decades. These times are unforgiving for most stocks.

However, from a legal perspective, some additional guardrails that could help to better align the interests of SPAC sponsors and investors are overdue. Those changes, even if implemented now, might help SPACs navigate today’s challenging legal environment under the Gary Gensler-led Commission to emerge as a stronger industry when market conditions improve. 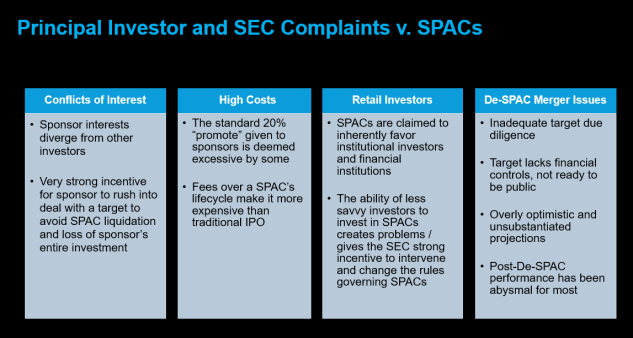 As represented in the above table, retail investors and the SEC have had roughly four major complaints regarding SPACs. First, conflicts of interest can arise when the interests of the SPAC’s sponsors and management are at odds with other investors. Second, fees and other costs in SPAC transactions and advisory matters are high, yet often opaque. Third, retail investors get short shrift compared to sponsors and large investors. Last, many de-SPAC merger transactions have significant due diligence, disclosure, accuracy, and post-merger performance issues.

For more on problems with SPACs, there are several good analyses, including one in an April 7 Bloomberg Opinion piece, another in a essay published in November by several academics, and a third in an April 2021 statement by then Acting Director of the SEC’s Division of Corporation Finance John Coates.

So where do SPACs go from here? Consider the following example of WeWork’s deeply flawed initial attempt to go public and subsequent reinvention: It may show ways SPACs can become better equipped to address those complaints and overcome the higher bar likely to soon be set for them.

In 2019, WeWork became the poster child for start-ups that aren’t remotely ready for the unforgiving scrutiny directed at would-be public reporting companies during the initial public offering registration process.

The company’s IPO had been expected to be the second biggest that year, anticipated to raise about $47 billion. But WeWork’s IPO application failed in spectacular fashion amid pointed questions about six problem areas: (1) the company’s erratic management, (2) weak corporate governance, (3) a dubious business model, (4) conflicts of interest, (5) inflated valuation, and (6) overly optimistic prospects. Ultimately, WeWork withdrew its application to the SEC for an initial public offering.

Fast forward to October 2021: WeWork received a warmer reception for its listing on the New York Stock Exchange, where it went public via a $9 billion reverse merger with a SPAC called BowX Acquisition.

WeWork is still losing a lot of money, but it has received additional cash infusions and made important changes, including closing offices and dumping its CEO. Management now expects to generate positive free cash flow (the cash available after paying operating expenses and capital expenditures) this year.

After sullying its reputation, the company couldn’t raise the billions it needed by re-starting its traditional IPO. Going public via a SPAC merger made sense for the company and was perhaps their only viable option to reach the public markets.

WeWork failed so spectacularly as an initial public offering because of its many significant flaws. Most IPOs that experience difficulty have maybe three or four significant shortcomings; WeWork displayed at least six.

But WeWork re-worked its business model, improved its financial and corporate governance practices, and has made it through to the other side as a public company. As a public company, it’s obligated to keep its house in order and has access to the public markets for future fundraising.

Current and future SPACs can also make it to the other side of these trying times by addressing some of the complaints made against them. Here are some steps I would commend to them:

Strengthen sponsor disclosures. SPACs should disclose the composition of their sponsor entity, information which isn’t typically made public. SPACs should also improve disclosure of fees and repayment of any financing, to whom the financing will be paid, their status as affiliates (if applicable), and the complete expected cost of fees and payments over the course of the SPAC’s life (from IPO until completion of the de-SPAC merger).

Better align sponsor interests with SPAC’s investors. Is the SPAC sponsor’s total expected compensation reasonable relative to the risk it’s taking and the expertise it’s providing? Has shareholder dilution been adequately considered? Receipt of sponsor shares could be conditioned on ambitious post-merger stock price targets to better align interests. Further, advisory fees paid to a sponsor could be made in shares rather than cash. Any proposed merger deal should receive an independent fairness opinion.

Conform de-SPAC projections to the “bespeaks caution” doctrine. The SPAC industry should presume that the SEC will adopt its proposed rule to remove the Private Securities Litigation Reform Act of 1995’s (PSLRA) safe harbor provision for SPACs. The provision permits SPACs to make forward-looking statements with less concern about antifraud suits if the statements turn out to be inaccurate.

Although this change seems like a punitive measure directed at SPACs, there are still protections available for those SPACs that make projections that investors want and need about the merged company. What is important is ensuring that SPACs and their advisers engage deliberately in due diligence, and that any forward-looking statements made in the proxy statement/prospectus for the de-SPAC are identified as such, are made with a reasonable basis, and are accompanied by cautionary statements identifying important factors that could affect the merged company’s results to materially differ.

Improve target due diligence to enhance quality of merger deals. Given the very strong incentives for sponsors to accept almost any kind of merger deal, setting significantly higher deal standards without outside assistance is likely unrealistic, but improving due diligence is not. The SEC is mindful of the pressures to cut a deal, which is a big part of why the Commission seeks to hold IPO underwriters liable for the de-SPAC financing: It wants underwriters to force SPACs to undertake a more comprehensive due diligence and to make more grounded deal projections. Disclosures of potential conflicts need to be made.

As of last month, there were at least 30 companies that went public via a de-SPAC trading at modest multiples, in contrast to the generally poor performance by de-SPACed companies. Although these de-SPACed companies operate in a variety of industry sectors, they share some essential traits: real cash flow, positive net income now or in the near future, stock that is recommended by a majority of analysts, and a business that operates under a proven business model. It should be noted that of the de-SPAC deals announced in May, about half don’t expect to be profitable this year.

Clarify engagements with investment banks. When an investment bank is a SPAC’s sponsor, it shouldn’t underwrite either the IPO or the de-SPAC transaction. The conflict of interest is clear and present. They also should not advise both the SPAC and the target in the de-SPAC merger, but they often do. If there are no such conflicts, it would be prudent to use different underwriters for the IPO and for the de-SPAC to avoid running afoul of the SEC.

Ensure the target is ready for prime time. Too many SPAC targets have proved not up to the many stringent and expensive demands required of public reporting companies. As a point of reference, private companies generally take about a year and a half to make all the organizational, financial, and administrative changes needed to prepare for going public through a traditional IPO.

So it makes sense that not all private companies are ready to shortcut the process by going public via an already-public SPAC. It took WeWork two years after its failed IPO to ready itself to go public via the easier SPAC route. Conducting due diligence of the target will make plain whether it’s ready to be in the spotlight. Mature internal controls, establishment of the necessary committees, and disclosure and remediation of material weaknesses are essential. The company should either eliminate or mitigate conflicts of interest, or provide a clear disclosure of the nature of an insider’s conflicting economic interests. The target should have experienced personnel in accounting and legal positions that will play key roles in its internal controls and reporting function.

A Future Role for SPACs

SPACs offer an important alternative to the traditional initial public offering. The vehicle has gained widespread acceptance among underwriters and top legal and accounting firms, and there have been more than 1,000 SPAC IPOs since 2017.

With enhanced disclosures, improved due diligence, and the selection of public company-ready targets, the SPAC industry should be able to ride out the current economic challenges and legal headwinds to emerge stronger and more resilient.