This year we have seen terminations in a total of 252 mergers and acquisitions deals. This year-to-date termination count falls well below 2020’s total of 321 for the same category of transactions. Could the omicron variant of the Covid-19 virus, which the World Health Organization just designated as a variant of concern on Nov. 26, potentially shift the trend toward more deal terminations?

Given what we’ve seen in response to the declaration of the pandemic in March 2020 and the WHO’s designation of the delta variant as a variant of concern (VOC) in May 2021, it seems conceivable that in the next few months we could see somewhat elevated termination counts. The highest monthly total of terminations since the beginning of last year occurred in May 2020, the second month following the declaration of the pandemic. (Our dataset includes deals valued at $1 million or greater for the control of the company, or for assets to be acquired, that were terminated after the parties entered into a definitive agreement.) And this year, June and July totals went up following the lowest number of terminations seen since the beginning of 2020 in May, the same month the delta variant was designated as a VOC. 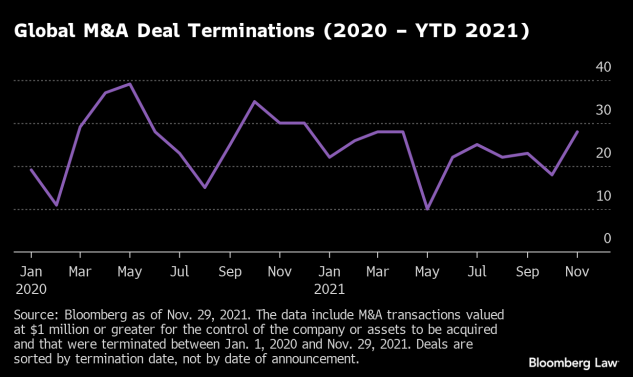 It makes sense that we would see a one- or two-month lag in terminations after a major Covid-19 event: first the markets react, travel is restricted (again), business and valuation impacts ripple, then it takes some time for negotiations to fail. All this being said, as we have previously remarked, the M&A market has been resilient and has not at any point seen sky-high termination levels in response to this pandemic. In fact, as we’ve noted before, annual totals for 2020 and 2021 thus far are on par with—or lower than—the 2019 total.

Although the overall termination count this year is lower than 2020’s, the dollar totals tell a different story. Nearly double the dollar volume has been associated with terminations this year, meaning, of course, that it’s the larger deals that have been terminated in 2021. The aggregate value of this year’s terminations is $321 billion, resulting in an average deal size of $1.3 billion. In 2020, $174.2 billion in deals were terminated, with an average deal size of $543 million.

Among the largest deals to be terminated so far this year were the the $33.1 billion Kansas City Southern–Canadian National Railway Co. deal (cash and stock), and the $31.4 billion Willis Tower Watson PLC–Aon PLC deal (stock). Other notable terminations have been the $14.2 billion Five9 Inc.–Zoom Communications Inc. deal (stock) and the $5.3 billion Plaid Inc.–Visa Inc. deal (cash).

On Nov. 1, before the detection of the new omicron variant, I had asked what will happen, in the context of M&A contract drafting, “if the pandemic unexpectedly gets worse (again).”

With the emergence of this new variant, we may see a shift toward more precise and more conservative drafting of material adverse effect (MAE) definitions and other relevant provisions, such as interim operations covenants, so as to allow deal parties more flexibility and/or a way out in the case of added uncertainties or a severe worsening of the pandemic.

Deal parties in the midst of drafting and negotiating deal agreements this week who are considering explicitly excluding “worsening” and “future waves” of Covid-19 might rethink that decision.