It really is all about control. As discussed in our recent analysis, more than half of respondents to Bloomberg Law’s M&A Deal Insights 2020 survey reported that they are uncomfortable with how the drafting of principal agreements in mergers and acquisitions transactions is assigned to in-house and external deal teams. When those same uncomfortable respondents were asked which factors contributed to their desire for a new way to divide drafting work, the top answer was their desire for control over first drafts of agreements. M&A lawyers’ desire to retain control beat out other potential rationales — including those related to speed, cost, efficiency, and just being better equipped to do the work — by far. 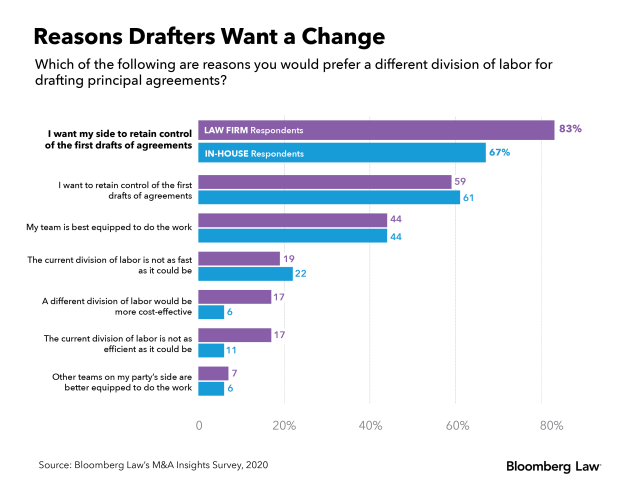 All respondents who indicated a lack of comfort with the division of drafting work on principal agreements were also given an opportunity to provide a brief written explanation for their feelings. The written responses offer insight into why lawyers working on M&A transactions view control over first drafts as being so important: “Doing the first draft makes it more likely to get what my client wants,” said one respondent. “Fewer screw ups,” said another, succinctly.

Several other respondents expressed discontent with buy-side counsel dominating drafting. “Too often, buyer’s counsel prepare drafts that are unreasonable[, u]sing inexperienced young associates,” one respondent noted. Echoing this sentiment, another respondent explained: “The traditional allocation presumes the buyer draft the principal agreements. That is not always reflective of efficiency and the primary interests of the parties.”

One of the 61% of in-house counsel that expressed a desire to personally retain control of first drafts explained: “It is best for my client (the buyer) for their in-house counsel to draft all documentation. This is not only the cheapest option but gets the best results. My team knows our company, its needs, strengths/weaknesses, history, etc. best.”

Problems particular to auctions were also raised: “In a bid process we are often forced to use the other side (seller’s) form agreement, which sometimes does not fit the nature of the transaction (stock v. asset, or [earnouts] v. up-front) and has to be completely re-worked, which is inefficient and cumbersome.”

These results, when taken together, tell us that being in control of first drafts is key to M&A lawyers feeling comfortable with the drafting process. Given the prevalence of these feelings of discomfort and the desire for control, it might be constructive for deal parties to start an open discussion about preferences and rationales regarding who should hold the pen before diving into a “traditional” approach.