Among the largest of these investments were Rivian Automotive Inc. ($2.5 billion), Space Exploration Technologies Corp. ($1.9 billion), and Flipkart Online Services Pvt. Ltd. ($1.7 billion). And while investors continue to put their money into technology targets at significant levels, they appear to have developed a new favorite last quarter: consumer, non-cyclical businesses. 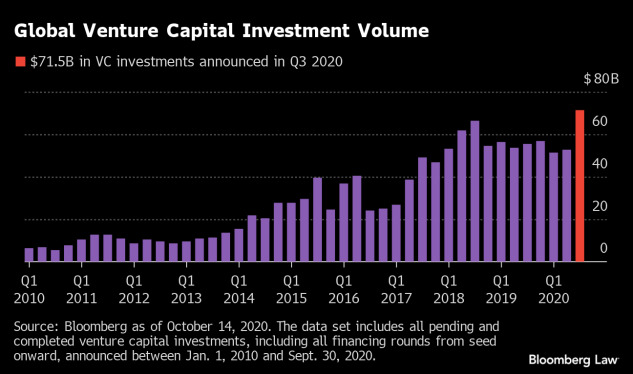 In the third quarter, consumer, non-cyclical targets garnered $21.5 billion in venture capital investments — the highest volume of venture capital investments of any sector for the quarter. In fact, that sector beat out technology targets, which raised $19 billion in venture capital funding. The last time technology took second place rather than first was the second quarter of 2018, when the communications sector raised $22.6 billion, putting it in the No. 1 spot. Looking at 2020 so far, consumer, non-cyclical targets have seen $47.5 billion in investments, representing a striking 40% increase in volume compared to last year. 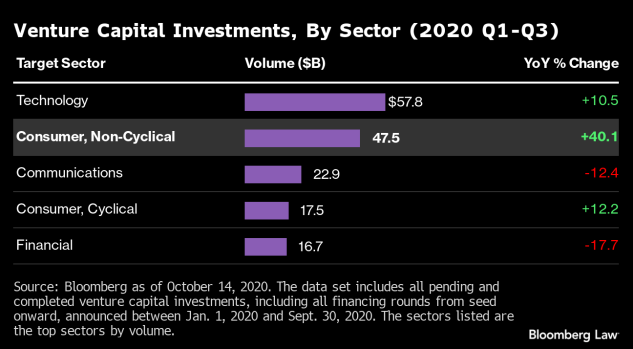 In a year defined by a global health crisis, medical and health-related industries comprised the majority of 2020’s consumer, non-cyclical venture capital investment volume: Biotechnology targets have raised $16.1 billion in investments through the end of the third quarter, representing a 69% year-over-year increase; and a combined $17.1 billion in funding went to pharmaceuticals (+40.4% YoY), healthcare services (+87.9% YoY) and healthcare products (+19.7% YoY) targets.