Insider trading was once a hot topic in federal securities law. The government prosecuted high-profile cases involving millions of dollars and celebrity defendants, and a unanimous Supreme Court found that a Chicago grocer should go to prison for trading on nonpublic information he received from his brother-in-law.

That was then. Since that 2016 Salman decision, the number of insider trading prosecutions has declined. Insider trading practice also continues to be marked by uncertainty and ambiguity about the definition and scope of the offense. 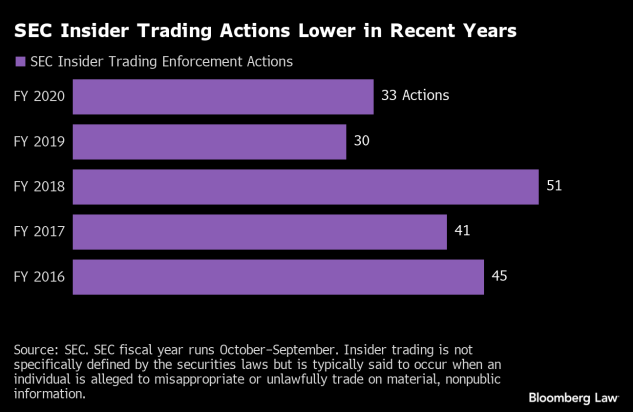 Interest in unlawful trading on nonpublic information appears to be growing, however. The SEC Enforcement Division will likely pay more attention to insider trading under Chairman Gary Gensler than it did under former head Jay Clayton. The House of Representatives also overwhelmingly passed a bill that, for the first time, would provide a statutory definition of the offense. In addition, insider trading showed up on the SEC’s rulemaking agenda, as Chairman Gensler wants the staff to re-examine the regulatory provisions that protect corporate executives from insider trading liability when they engage in pre-planned trades.

The federal securities statutes do not prohibit trading while in possession of material nonpublic information (MNPI). The courts have defined the elements and scope of the offense over the years, in a series of fact-specific opinions that are not necessarily consistent. Exchange Act Section 10(b), the statute’s general antifraud provision, is the basis for liability. As such, the court decisions are phrased in terms of fraud and deceit, rather than information inequality or market fairness.

In May, the House of Representatives, by a vote of 350-75, passed H.R. 2655, the Insider Trading Prohibition Act. The measure is largely identical to a bill that passed the House in 2019 but failed to gain traction in the Senate. A narrow Democratic majority may consider the new version of the bill more favorably.

As passed by the House, a new Section 16A of the Exchange Act provides that it is unlawful for any person to engage in securities transactions while “aware” of material nonpublic information relating to the security in question. To be actionable, the MNPI must either have, or be reasonably expected to have, a material effect on the market price of the security. Under the new provision, any person charged must know, or recklessly disregard, the fact that the information was obtained wrongfully or that the transaction would constitute a wrongful use of the information.

Under the bill, information is wrongfully obtained if it results from:

The measure would also prohibit tipping of MNPI. The person tipping would be liable if the trading by the recipient of the tip was “reasonably foreseeable.”

It is important to note that the bill retains a watered-down version of the controversial “personal benefit” requirement originally established in the Dirks case to ensure that the prohibition would not sweep up permissible corporate communications. The measure establishes a fairly low bar, as it would be satisfied by a showing of a pecuniary gain, reputational benefit, or a gift of confidential information to a trading relative or friend. It also would not be necessary for the trading person to know specifically how the information was obtained or whether a personal benefit was paid or promised.

Chairman Gensler said at an industry conference last week that there are cracks in the SEC’s surveillance and regulation of insider trading.

Usually, an insider may legally trade company shares if their buying or selling of those shares is restricted to limited periods of time known as open trading windows. These windows open typically after the company makes important company information public.

Section 10(b) of the Securities Exchange Act of 1934 and Rule 10b-5 prohibit insider trading, and Rule 10b5-1, adopted in 2000, warns that awareness, not use, of material non-public information is sufficient to establish liability in insider trading cases.

Efforts to comply with SEC Rule 10b5-1 gave rise to 10b5-1 trading plans. Those plans help insiders, as well as public companies and certain private companies, take advantage of the rule’s affirmative defense provisions against a possible allegation of insider trading. (An affirmative defense protects against liability for engaging in an action that is normally prohibited.) If an insider sells company stock while possessing MNPI, but is able to say, “Yes, I did sell those shares when that information was still not public but my action was permitted, in whole or in part, in this particular circumstance,” it is a type of affirmative defense to liability. However, Rule 10b5-1 also allows insiders to take advantage of loopholes in the rule that permit insiders to manipulate the timing of their insider trades, effectively defeating the rule’s purpose.

Rule 10b5-1 trading plans offer significant benefits for companies and insiders, for whom equity compensation from the company can be substantial. Without a trading plan, companies would need to make a materiality determination regarding nonpublic information possessed by a company insider before every trade. Trading plans avoid that administrative headache by determining materiality when the plan begins, not before every trade by every insider. They also provide significant protection from insider trading liability and, hence, greater certainty for participants.

The Shortcomings of 10b5-1 and Its Trading Plans

The 10b5-1 trading plans arguably afford insiders too much latitude to modify or cancel plans, essentially permitting insiders to engage in trading prohibited by Rule 10b5-1. Insiders, relying on MNPI, are able to either maximize their profits or avoid trading losses by modifying or canceling the plan if a plan-scheduled trade looks less than optimal financially. Rule 10b5-1 trading plans may be modified or canceled at any time, and there are no specific disclosure requirements for the plans or the trades made pursuant to those plans.

In his speech June 7, Gensler identified four deficiencies in the SEC’s regulation of insider trading under Rule 10b5-1:

Likely Next Steps for Congress and SEC

The remedies SEC staff might recommend for these four Rule 10b5-1 deficiencies ought to be straightforward. The Commission could amend Rule 10b5-1 to limit insiders to only one trading plan at any given time. It could impose mandatory disclosures for companies and insiders, and require that those filings be made electronically for more efficient dissemination. Third, the cancellation of trading plans could be restricted, and the Commission could amend the rule to set a time period during which plan participants must wait before executing a trade in company stock. Chairman Gensler indicated that there is bipartisan support for a four- to six-month cooling-off period. He appears committed to action in this area, and has placed the question of the weaknesses of Rule 10b5-1 plans on the agency’s Regulatory Flexibility agenda.

Meanwhile, the insider trading legislation will have a greater chance of passing the Senate than did the similar 2019 bill, although even a weakened “personal benefit” requirement could generate opposition from the slim Democratic majority. While the measure largely codifies much of the judge-made law of insider trading, it gives courts a valuable tool to use when novel or complex cases arise that may not fit neatly into a Rule 10b-5 fraud box.