Travelers wear protective masks amid an outbreak of a new respiratory virus while traveling through the Hongqiao high-speed railway station in Shanghai, China, on Jan. 22, 2020.
Photographer: Qilai Shen/Bloomberg

The new lunar year is off to a traumatic start, with the deadly coronavirus outbreak putting travel, markets, and deals on hold. While 2019 was a remarkably bad year for M&A involving parties from China and Hong Kong—with the trade war, the Hong Kong protests, and ramped-up foreign investment restrictions targeting Chinese investors abroad—will 2020 be even worse? As January comes to a close, only 403 deals (172 of which are pending) involving at least one Chinese party have been announced in 2020 so far, with an aggregate value of $17 billion.

2019’s strong aggregate global M&A volume fell short of matching 2018’s volume by just $100 billion. $3.1 trillion in worldwide public and private mergers and acquisitions deals were announced in 2019, as compared with $3.2 trillion in 2018. 2019, however, was not a hot year for M&A involving Chinese acquirers or targets. 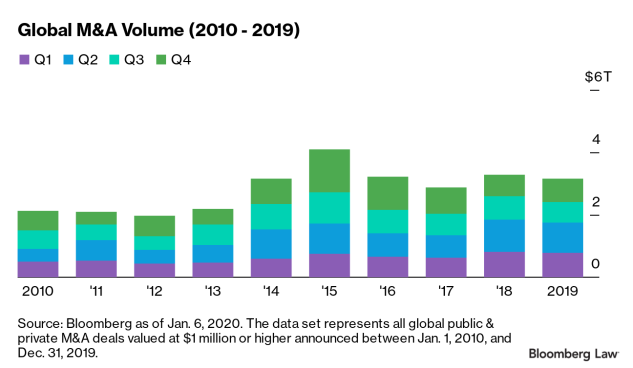 In 2019, M&A involving Chinese targets, totaling roughly $170 billion, represented only 5% of all global M&A volume. This is quite a thin slice compared to M&A involving U.S. targets, which made up more than half of global M&A volume last year. China is underrepresented in the global M&A market in relation to the sheer size of the Chinese economy: GDP in China was $15 trillion in 2019, and $22 trillion in the U.S. 2019’s volume for deals involving Chinese targets was the lowest since 2014 and is part of a downward trend over recent years following a peak in 2015. 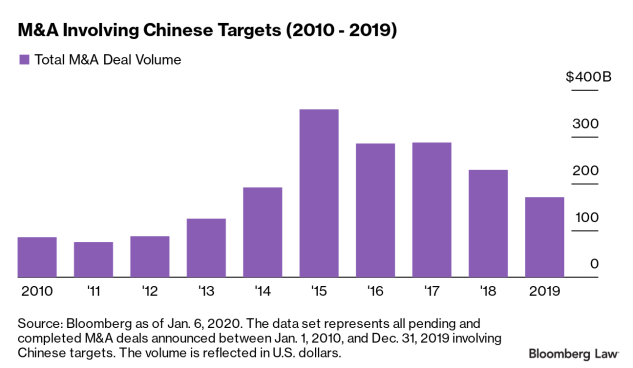 Similarly, last year, Chinese acquirers were the least acquisitive since 2013, as measured by deal volume. 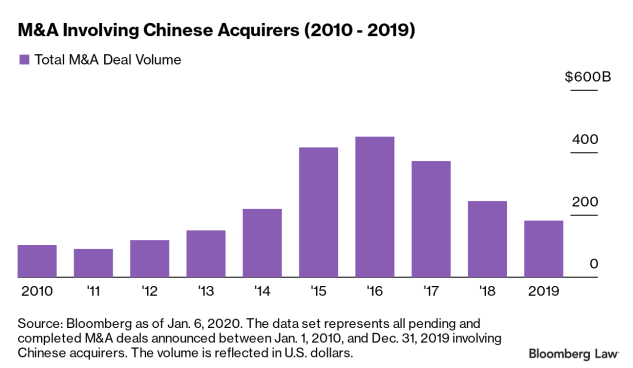 Roughly 80% of all Chinese M&A activity is domestic, involving both Chinese acquirers and Chinese targets. For foreign deals involving Chinese targets, protest-torn Hong Kong was the top acquirer country in 2019, with $8.8 billion in acquisitions. South Korea and the U.S. were second and third on the list, but the aggregate cross-border dollar volumes are just a small fraction of domestic M&A activity. 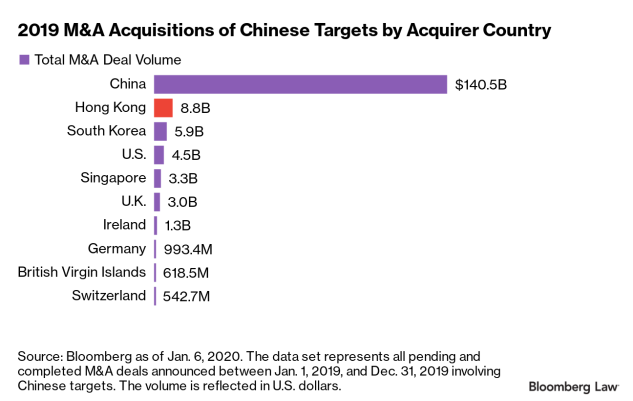 Looking at 2019 Chinese outbound cross-border investment, the volume is also shockingly low, with the United Kingdom ($9.4 billion) ranked as the top foreign target country for Chinese acquirers, and Hong Kong ($5 billion) and Peru ($3.8 billion) in second and third place. 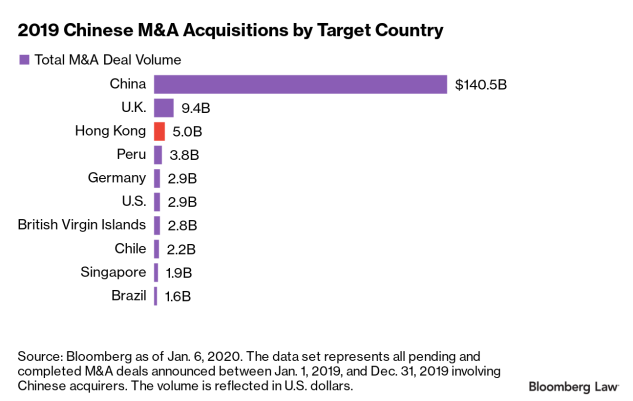 These low volumes for both inbound and outbound Chinese M&A are no surprise to those who have been riding the recent steady wave of decline.

M&A investors avoided Hong Kong in 2019. 2019’s $13.6 billion in announced deals involving Hong Kong targets was the second-lowest deal volume of the decade for such deals. 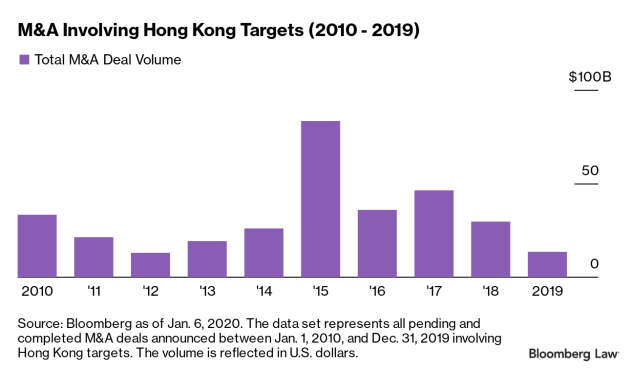 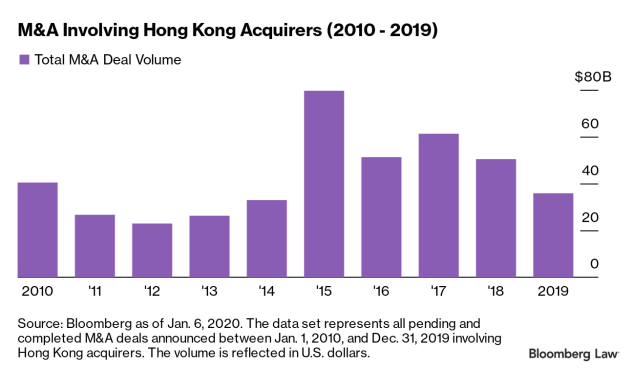 With the coronavirus on Hong Kong’s doorstep exacerbating existing political tensions, things seem to be getting worse by the day. It’s hard to imagine that Hong Kong will be able to turn things around in 2020, but it’s only the third day of the Year of the Rat.

A Decade in M&A Between Hong Kong and China 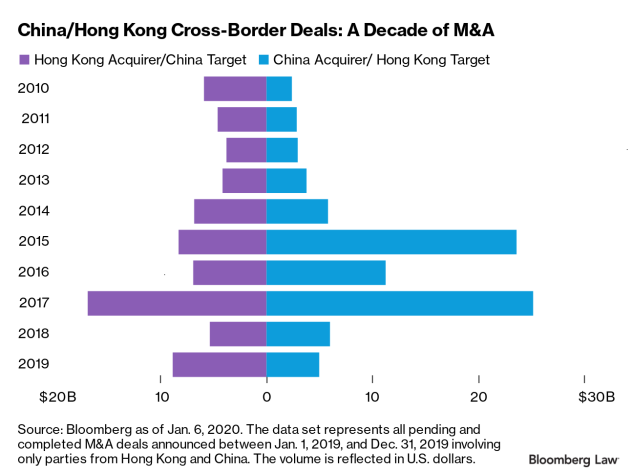 One contributor to the complexity of the suffering Chinese cross-border M&A market is the recent increase in curbs on Chinese investments in the U.S. and jurisdictions such as the European Union, Germany, Australia, and Israel. The Committee on Foreign Investment in the U.S. (CFIUS), along with other U.S. government agencies, has played a major role in blocking and unwinding Chinese investments in the U.S. due to national security concerns. Following a peak year for Chinese acquisitions of U.S. targets in 2016, totaling $57 billion, Chinese acquisitions of U.S. targets have fallen off the map, with only $2.9 billion in 2019. 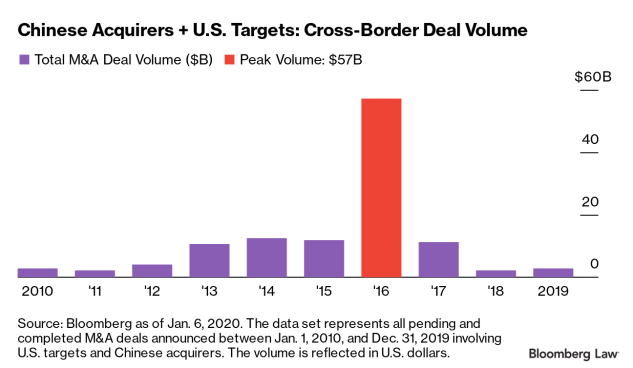 Final regulations issued earlier this month implemented recent CFIUS reforms that vastly expand the jurisdiction of the committee to review a broader universe of transactions, including non-controlling investments and purely real estate transactions. One key aspect of the new CFIUS legislation and reform is that they allow CFIUS to clamp down on investments that are intended and designed to circumvent CFIUS review—a feature known to be aimed at, and in response to, “creative” Chinese investors. Specifically, in the final regulations, the definition of “covered transactions” includes, as its own subcategory, the following: "(d) Any other transaction, transfer, agreement, or arrangement, the structure of which is designed or intended to evade or circumvent the application of section 721.” 31 CFR § 800.213(d).

This gives CFIUS the ability to review and block transactions that are structured outside of classic investment structures—read: venture capital, real estate, tech-related investments, and any other new inventive structures investors come up with. Given that these final rules are due to go into effect Feb. 13, it is safe to say that the real “CFIUS effect” on Chinese investment in the U.S. is yet to be seen.