Newly released official data regarding investment reviews by the Committee on Foreign Investment in the U.S. (CFIUS) for calendar year 2019 show that the Committee investigated fewer transactions and caused fewer deals to be abandoned, despite receiving more filings by deal parties than in previous years.

The increase in filings, which was expected to occur, came as a result of the Foreign Investment Risk Review Modernization Act of 2018 (FIRRMA) critical technology pilot program, under which 94 short-form declarations were filed last year. 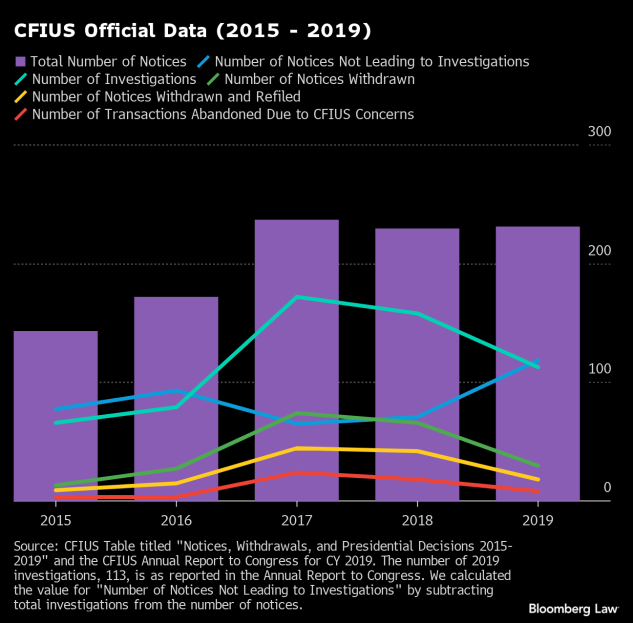 A new Annual Report to Congress for calendar year 2019 released Thursday and an updated summary data table published by the U.S. Department of the Treasury give us a fairly detailed view of CFIUS activity last year. The data show that a steady number of notices were filed last year (231 total notices filed) at a level consistent with 2018 (229 total notices filed) and 2017 (237 total notices filed), even while counting notices filed as part of the critical technologies pilot program. (More on that below.)

Of the 94 declarations filed under the critical technologies pilot program in 2019, the Committee requested parties to file full written notices in 26. As for the remainder of the declarations, 32 parties were notified that “the Committee was unable to complete action.” In CFIUS parlance, these parties were given “the shrug,” meaning the Committee did not make any determination with regards to the transaction, essentially leaving the parties to choose between waiting and seeing or going ahead and filing a voluntary notice just in case. And 35 parties were notified that “the Committee had completed all action under Section 721.” One declaration was withdrawn “for business reasons.”

Given the number of these transactions that received request for notice or “the shrug” (which, as mentioned above, could lead parties to file notices), it’s interesting that there were not enough additional critical technology notices filed to cause a spike in the total number of notices for 2019.

The pilot program seems to have been advantageous for Treasury, in the sense that, for the 94 declarations that filed: (1) All 94 could have potentially been full-form joint voluntary notices, rather than short-form declarations that the Committee would have had to review if it weren’t for the pilot program; (2) For the 67 declarations that were either resolved or given “the shrug,” the Committee got those matters “out of its court,” so to speak, much faster than it otherwise would have (even when only considering the lower total number of pages of party submissions needed to be reviewed); and (3) No surge in full-form notices filed resulted because of the pilot program.