Safe harbor or rocky shoals? Last fall’s new foreign investment review rules apply to a broad range of investments and investment funds. While lobbyists tried to negotiate a safe harbor, implementing regulations will have to do a lot of work to shield offshore funds and passive foreign investors.

The Foreign Investment Risk Review Modernization Act of 2018 (FIRRMA), enacted in August 2018, drastically expanded the scope of “covered transactions” — those subject to review by the Committee on Foreign Investment in the United States (CFIUS or the Committee). A new category of covered transactions called “other investments” includes certain non-controlling investments in U.S. critical infrastructure, critical technology, or personal data. (For an overview of changes brought by FIRRMA and discussion of “other investments” see our recent analysis piece.) “Other investments” may be “direct or indirect,” potentially including foreign investors in any layer of a typical, multi-tiered investment fund structure.

The legislation also includes a “clarification” regarding investment funds that are owned, managed or controlled by non-U.S. persons. The provision defines the types of fund investments that fall under the exception by focusing on the nationality of the managers and individuals on funds as well as the nature of the types of control and authority held by foreign persons involved in them.

The statute does not define “investment fund.” The clarification applies to any “indirect investment by a foreign person in a United States business...through an investment fund....” The interim regulations governing the critical technology pilot program, discussed below, do, however, define an “investment fund” as any entity that is an “investment company” as defined in Investment Company Act §3(a), even if the entity would fall within the statutory exemptions in §§3(3(b) and 3(c). As such, under the pilot program, “investment fund” covers conventional funds engaged in the business of investing in securities or issuing face-amount certificates, as well as entities such as private equity funds, hedge funds, and government sovereign wealth funds.

Any investment fund with a foreign limited partner, foreign investors, foreign advisory body members, offshore entity, or foreign funding that is investing in the U.S. should now include CFIUS compliance analysis as part of its investment process.

Half a Trillion Dollars Implicated

In 2019, private equity deals have made up more than a quarter of all worldwide mergers, acquisitions and investments, totaling $582.57B as of May 23, 2019. A significant portion of the deal market may see broader and deeper CFIUS review of investment structures—well beyond the more traditional CFIUS review of acquisition targets and their owners.

FIRRMA’s implementing regulations, due to come into force no later than February 2020, should elaborate on how investments will be treated for the purpose of CFIUS analysis and review. Once regulations are implemented, new mandatory filing requirements and filing fees will apply to investment fund transactions qualifying as “other investments” that are not covered by the clarification.

The “Specific Clarification for Investment Funds”

FIRRMA’s section entitled “Specific Clarification for Investment Funds” lays out a narrow exception for non-controlling investments in U.S. critical infrastructure, critical technology, or personal data made through an investment fund with a foreign person on its advisory body. These investments would otherwise fall under FIRRMA’s “other investments” category and be subject to CFIUS review. Under the exception, a transaction is not subject to CFIUS review if the investment fund is (1) managed exclusively by a U.S. person or entity that is its general partner, managing member or equivalent, (2) the foreign person does not have access to material nonpublic technical information as a result of its participation on the advisory body, (3) neither the foreign person nor the advisory body have the ability to control the fund, its investments, or entities in which the fund is invested. (See enumerations of exact types of prohibited control in the act.)

For this exception to apply, the foreign person, regardless of any advisory body role, must not have the authority:

Further, for this exception, the advisory body on which the foreign person sits must not have the ability to approve, disapprove or otherwise control:

(AA) investment decisions of the fund; or
(BB) decisions made by the general partner, managing member, or equivalent related to entities in which the fund is invested[.]

This provision focuses on the nationality of the managers of the fund and the amount of control held by non-U.S. persons with a role in the fund. There is no mention, for example, of the place of incorporation of the fund.

A significant amount of lobbying on the part of some of the biggest private equity players preceded the addition of the clarifying provision on investment funds ultimately included in FIRRMA. In the first quarter of 2018, the American Investment Council (AIC) (the private equity industry’s main U.S. lobbying group that includes Blackstone Group LP and Carlyle Group LP among others) increased its lobbying spending by 22% compared to the first quarter of 2017. According to Bloomberg Government data, AIC spent a total of $103,333 and Highstar Capital/Private Equity spent $80,000 on lobbying relating to FIRRMA (H.R. 5841) last year.

Behind this lobbying push was the private equity industry’s legitimate concern that FIRRMA’s expansion of the category of “covered transactions” to be subject to CFIUS review, absent a clarification, would be construed to cover all private equity funds with any foreign limited partners or those formed overseas for tax purposes. Last year, AIC’s general counsel told Bloomberg Government that “[CFIUS] reforms should avoid needlessly interfering with passive foreign investments in U.S.-controlled private equity funds.” It is apparent from the language in the investment funds provision in FIRRMA that its focus on the nationality of managers as well as those with authority and control over funds that lawmakers sought to address these industry concerns. 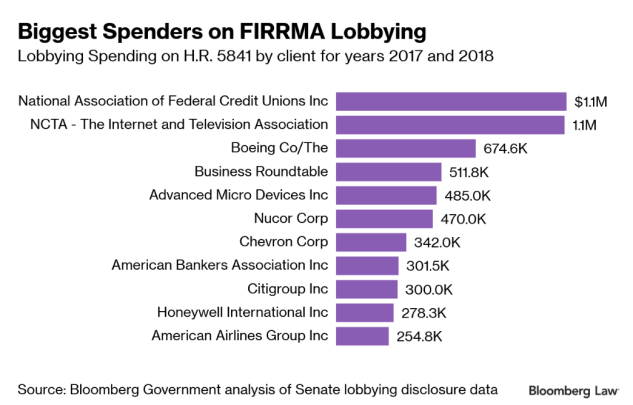 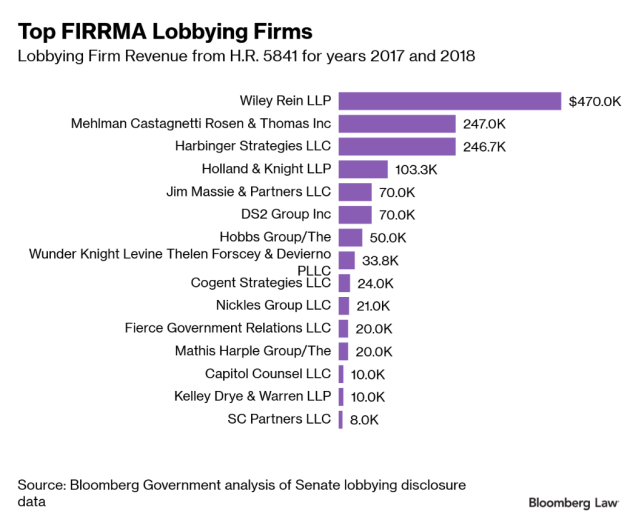 Private equity was by no means the only industry concerned about FIRRMA. A broad range of lobbying firms and their clients took interest in FIRRMA in 2017 and 2018. The charts above reflect dollar amounts companies spent on and revenue received for lobbying relating to this particular piece of legislation during the last two years. The National Association of Federal Credit Unions and the Internet and Television Association (NCTA) tied as biggest spenders on FIRRMA lobbying. Wiley Rein LLP came in as the top FIRRMA lobbying firm with $470K in revenue gained from FIRRMA lobbying through its three filings on behalf of Nucor Corp, the sixth biggest spender on FIRRMA lobbying. Bloomberg Government data indicates that Wiley Rein LLP’s main lobbying issue focus areas were foreign and domestic trade, communications and broadcasting, and telecommunications.

According to CFIUS annual reports to Congress and tables found at U.S. Department of the Treasury CFIUS Resource Center, a total of 1097 notices were filed with CFIUS between 2008 and 2016 with an average of 137 notices filed per year during that period. The president blocked only two deals reviewed by CFIUS during that period: the acquisition of a wind farm project in Oregon by Chinese-owned Ralls Corporation in 2012, and the 2016 acquisition by the Chinese firm Fujian Grand Chip Investment Fund of Aixtron, a semiconductor firm with U.S. assets. 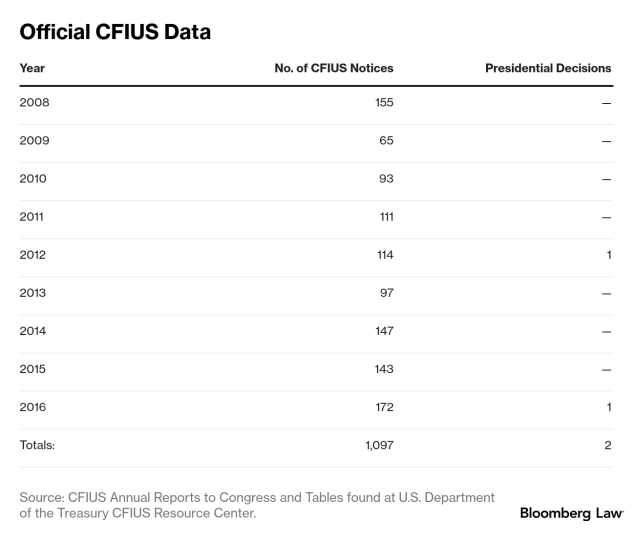 The confidential nature of the CFIUS review process keeps Committee opinions out of reach of the public. As a result, CFIUS legal precedent is only known by the parties, the Committee members, and the law firms that handle CFIUS cases. 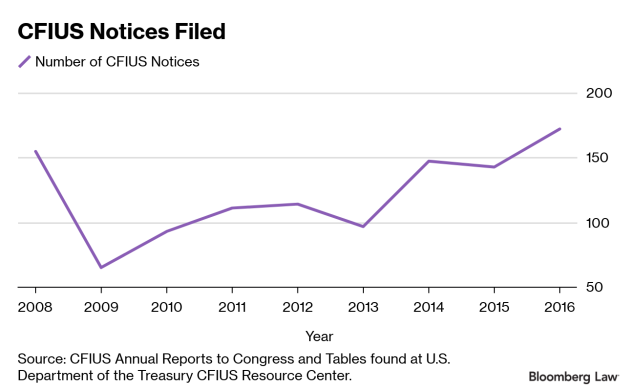 The numbers of joint voluntary notices filed with CFIUS by parties to transactions, as reported by the Committee to Congress, indicate a general upward trend between 2009 and 2016. The Committee’s annual reports to Congress—made public sometimes years after the fact—contain largely numerical information. Bloomberg Law reports data regarding deals in which CFIUS review is publicly reported by a party to a transaction in official company press releases, U.S. Securities Exchange Commission filings (merger agreements and 8-Ks), or on a party’s official company website. 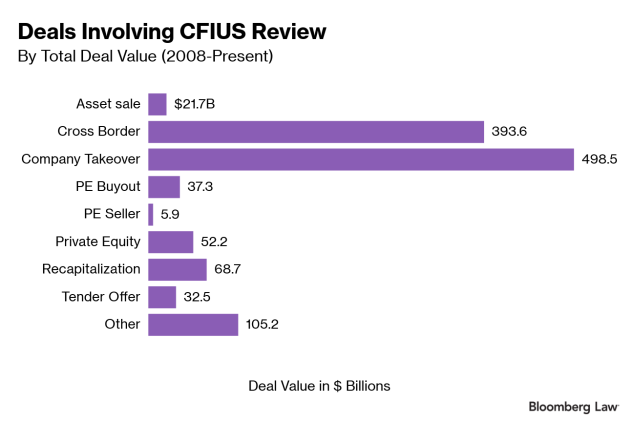 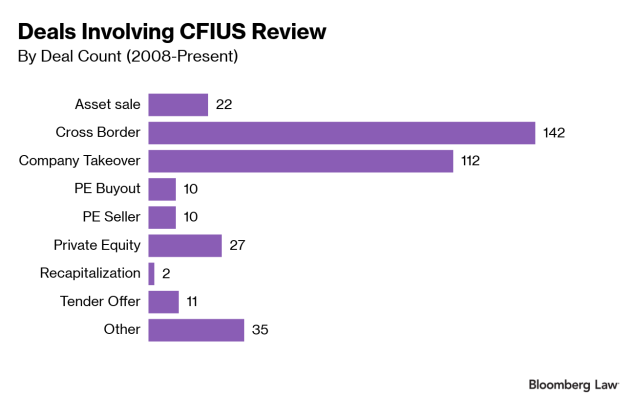 Based on Bloomberg Law data, from 2008 to the present, there have been 155 announced deals, including those that are pending, completed, or have been terminated, in which there was an official company public statement by a party to the transaction of CFIUS review. The total value of the 155 deals is $570B. Of these 155 deals, 27 were private equity deals with an aggregate value of $52.2B, representing 9.15% of the value of all CFIUS deals in that set. Ten of the private equity deals were private equity buy-outs and ten were deals involving a private equity seller. Of these 27 private equity deals 23 were completed, two remain pending, and two were terminated. The two terminated PE CFIUS deals were the acquisition of Lattice Semiconductor Corp by Canyon Bridge Capital Partners LLC which was terminated in September 2017 as a result of President Donald Trump blocking the deal at the recommendation of CFIUS and the sale of Aleris Corp to Zhongwang USA LLC which reportedly “collapsed following U.S. government opposition” in November 2017. Aleris is reported to have withdrawn its CFIUS application after failing to obtain CFIUS approval.