The Bureau of Labor Statistics’ monthly Employment Situation report, generally released the first Friday of each month, is actually two surveys in one. There’s the Current Employment Statistics survey (CES), operated by the BLS, and the Current Population Survey (CPS), run by the U.S. Census Bureau.

Why are two surveys necessary when they measure the same issue—U.S. employment? Because they approach the issue from two different points of view. The CES asks employers about their experiences; these results are called either “establishment data” or “payroll data.” The CPS, meanwhile, surveys individuals; these results are referred to as “household data.”

At the highest level, both surveys do a good job of mapping the same overall trends. Here, for example, are the year-end employment totals tabulated by each data series. 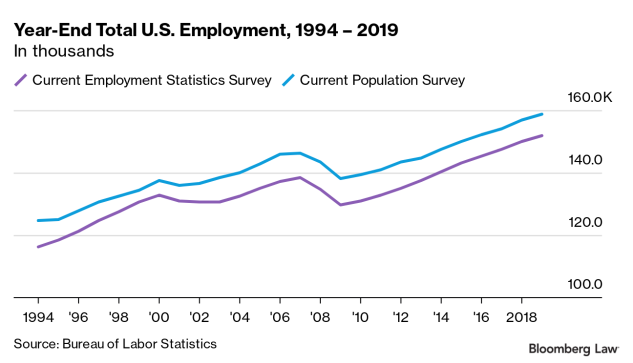 But there are differences between the two that make either one or the other preferable when evaluating a particular issue. For example, the CES’s larger sample size makes it a more accurate indicator of how many Americans are currently employed. These are the monthly employment figures that the BLS uses in its report.

On the other hand, the CPS’s broad range of definitions for “workers” make it the better depicter when it comes to measuring who’s NOT employed. That’s why the BLS uses it for its monthly unemployment rates.

When evaluating the employment situation for a subset of workers—lawyers, say—the picture can look different depending on whether it’s the legal industry or the range of legal occupations being analyzed. While, at times, the two can appear to be in direct conflict, both assessments are correct, even though they tell divergent sides of the same story. Such is the paradoxical power of statistics.