The legal labor force is still dominated by White workers, with deficits of Black representation in legal occupations, according to Bloomberg Law’s analysis of employment data released June 5 by the U.S. Bureau of Labor Statistics.

As Americans in cities around the country demand racial equality, legal organizations have called for the industry to make changes. Among them is the Association of Corporate Counsel, which pledged in a statement to “work with our members and partners to establish opportunities for the in-house community to…promote racial understanding and diversity.”

“Lawyers have a special responsibility to address these injustices,” said American Bar Association president Judy Perry Martinez in a video released on Twitter.

The numbers show the legal industry has a long way to go. While there are smaller racial disparities in legal occupations as a whole, there are profound gaps in the representation of Black and White lawyers in law firms and the federal judiciary.

According to our comparisons of employment levels by race in the latest BLS monthly employment report, Black workers are under-represented in legal occupations relative to their total representation in the civilian workforce. 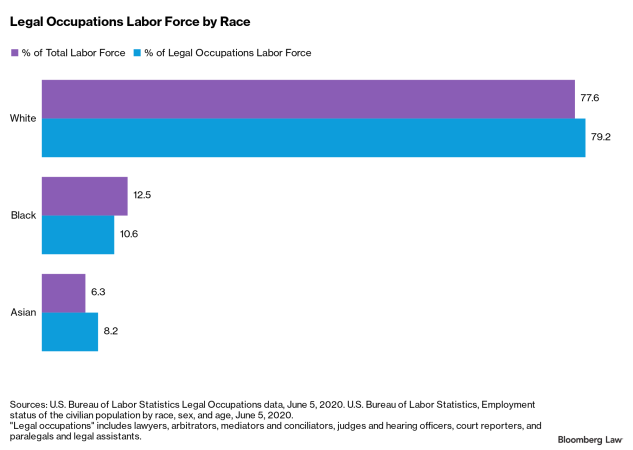 African-American individuals are even further under-represented among attorneys. This is true for both in-house and law firm attorneys, as well as judges.

An October 2019 survey of 238 large law firms by the Minority Corporate Counsel Association and Vault found that Black lawyers made up 4.83% of associates and only 1.94% of equity partners. White lawyers made up 73.38% of associates and 89.87% of equity partners. Black lawyers are also underrepresented relative to other minorities. That same MCCA survey found that Asian lawyers had more than twice as much representation as Black lawyers when comparing attorneys of color at law firms.

“Attorneys who come from diverse backgrounds consistently rate their employers lower than others on key inclusion metrics,” the MCCA survey found.

“A problem is that Blacks and African Americans are not matriculating to the highest level in the firm,” Karen Brown, founder of Bridge Arrow, a management consulting firm, said. Brown was formerly a chief diversity and inclusion officer at a large law firm. “What they’re experiencing is like they’re being muted. Because their voices aren’t being heard,” she said.

Black lawyers have also long been under-represented in top in-house legal departments. As of 2017, there were 54 Black general counsels or chief legal officers in Fortune 1000 and Global 1000 companies, according to the Black General Counsel 2025 Initiative.

Black judges are also lacking in the federal judiciary. 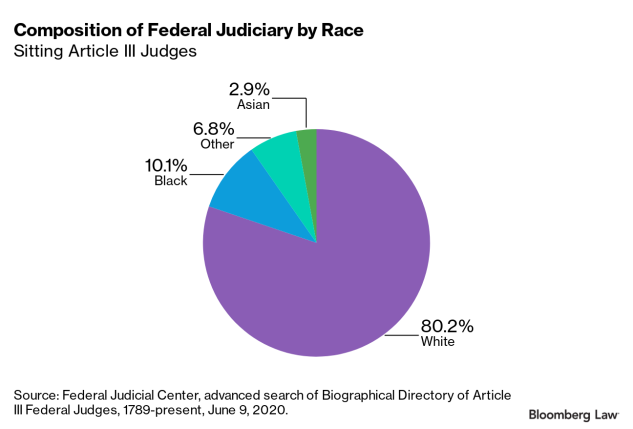 As of June 9, there were 140 sitting judges of African-American or mixed African-American race on Article III courts, out of 1,387 active judges, according to data from the Federal Judicial Center.

The protests are “putting a spotlight on an issue that’s long overdue for meaningful action,” Brown said.

“More companies, from small to large, profit to nonprofit, have denounced the injustice and are committing to action,” Brown said. “It gives me hope that we’re at a pivotal time that will bring about some sort of integral change.”

But if racial equality is to become more than just the conversation du jour for the legal industry, more aggressive, systemic change is needed.

Law firms must examine their own policies, practices, and behaviors, according to Brown, as well as dedicate “their vast resources on behalf of social justice organizations.”

Law firms also need to ditch the mentality that they are different from other businesses, Brown said. “One of the things that cripples law firms: They tend to say ‘Oh, we’re unique and therefore diversity is more difficult for us.’ Law does require a highly trained, specific talent pool, but that’s not an excuse. Get creative. Bring the same amount of rigor to talent as you do to the business.”

Law firms and in-house departments can also sign on to the Mansfield Rule, a program created by Diversity Lab that provides metrics for legal organizations to increase diversity. To be Mansfield Rule Certified, law firms must consider a pool that’s at least 30 percent women, attorneys of color, LGBTQ+, and lawyers with disabilities for leadership and governance roles, equity partner promotions, formal client pitch opportunities, and senior lateral positions.

In-house departments can be Mansfield Rule Certified if they consider a pool of at least 50% historically underrepresented lawyers for 70% or more of the leadership roles and key leadership activities identified by Diversity Lab.

In-house legal departments can drive inclusive behavior by law firms, according to Brown. “If the client begins to demand that law firms show up in a certain way, the law firms will do it.” Corporate counsel should pay attention to hiring diverse teams—not just at the outset of a relationship, but by following up on who their timekeepers are to ensure diverse attorneys are actually being given opportunities, Brown said.

“This is the time to do something transformative,” Brown said. “Math has no opinion. So organizations need to start counting and ask questions. Ask: Who is missing? Why are they missing?”