Although in-depth, U.S. antitrust reviews take an average of 12 months to complete, Bloomberg Law’s review of large, publicly available M&A agreements signed during the first three quarters of 2021 shows that most have an initial “outside date” less than 10 months from the date of signing. 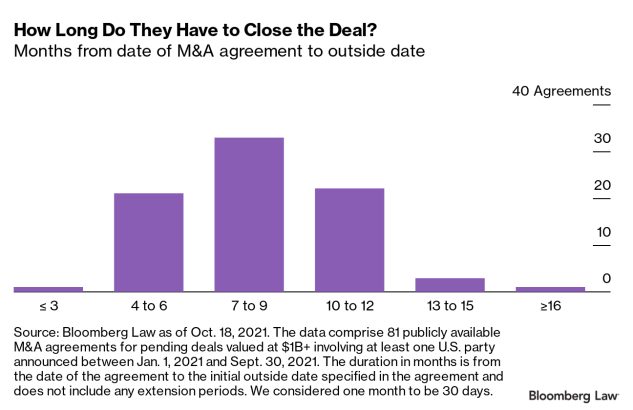 We reviewed 81 publicly available M&A agreements for deals valued at $1 billion or greater, involving at least one U.S. party, signed between Jan. 1 and Sept. 30, and still pending as of the date of our review (Oct.18). For each of these 81 agreements, we calculated the duration in months from the date of the agreement to the initial “outside date.” This date is the contractual deadline for closing a deal, which, if not met, typically triggers termination rights of the parties. It’s also referred to as the “end date,” “long stop date,” “termination date,” “outside termination date,” and even the “walk-away date.” We also noted whether or not each agreement allowed for set extension periods, typically of three months, to occur under specific conditions.

The average time allowed to close for the 81 deals was 278 days (roughly nine months), and the most common exact duration was one year (present in 19 of the 81 agreements). Of the 81 deals, 39, or nearly half, contained set extension periods that either occur automatically or may be triggered by one or more party under specified conditions.

For reference, an in-depth antitrust review by the Federal Trade Commission and Department of Justice lasts about a year—an average that has been steadily lengthening for years, according to statistics compiled by Dechert LLP. Recent changes to the antitrust review process suggest that clearance for even simple deals could take longer. Policy shifts also suggest heightened enforcement and possible further delays.

A lot of deals are hanging in the “pending” column. But, based on their “drop dead” dates, parties don’t seem to be adding time to their agreements for potentially protracted regulatory review. This suggests that either they don’t expect to be the unlucky deal stuck in regulatory limbo for an extended period, or they are prepared to abandon or renegotiate any deal that does draw serious regulatory concerns.