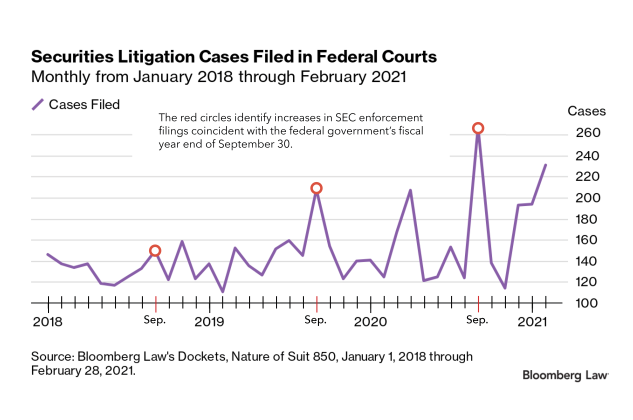 The graphic above illustrates the growth in filed cases beginning in December of last year through February 2021. Those are the first three months of consecutive increases since July–September 2018. The data also confirm an established pattern in the filing of securities enforcement cases. Each September, we typically see a spike in enforcement case filings by the SEC, coinciding with the closing of the federal government’s fiscal year on Sept. 30.

The recent uptick in non-enforcement-action securities litigation appears to be at least partly explained by two phenomena: (1) increased class action litigation against non-U.S. issuers, as detailed in a report issued by law firm Dechert LLP; and (2) an increase in lawsuits against SPACs. Based on Bloomberg Law’s Dockets data, there were 10 cases filed in federal courts against SPACs in 2018 and 14 filings in 2019. Last year, cases doubled to 28 against SPACs, and 19 new cases were filed in the first two months of 2021 alone. Through Mar. 14, 26 securities actions have been filed against SPACs this year, already nearly equaling last year’s total.

The pick-up in SPAC litigation is probably overdue: SPACs have raised billions in recent years but attracted surprisingly few court actions. Now, it appears trial lawyers have begun focusing on SPACs. For sure, SPACs have long have drawn criticism for their high but nontransparent fees, their limited disclosures made during the IPO process, terms favoring insiders (e.g., 20% of the company goes to sponsors as founder shares), divergent interests between shareholders and sponsors, and a sometimes rushed approach to merger due diligence. Those are just some of the areas that may be forming the basis of complaints filed against SPACs.

Many see President Biden’s nomination of Gary Gensler to head the SEC as a signal that enforcement will be a high priority during his administration. Commissioner Caroline Crenshaw’s speech earlier this month calling for stronger corporate penalties against corporate wrongdoers only bolsters that theory. The SEC now appears to be pushing hard against violations of Regulation FD, as AT&T recently discovered, and the SEC is also making the public aware of the special risks presented by SPACs. In a somewhat extraordinary move, the agency recently warned investors to exercise caution when considering investing in SPACs, particularly if they are doing so based on celebrity involvement.

SPACs and the Next Market Downturn

Previous market downturns occurred before the rise of special purpose acquisition companies and their IPOs. In 2009, SPAC IPOs made up only 2.5% of the IPOs priced on U.S. exchanges. By 2018, that number had risen to over 21% and, so far this year, over 72% of the companies taken public have been SPACs. The astonishing increase seen in SPAC IPOs in recent years, combined with some of their uncommon features, position SPACs to soon begin to account for a sizable and increasing share of new securities litigation cases.

Whatever the reasons behind the current rise in cases, when this current bull market comes to an end and stock prices drop, additional increases in securities litigation will likely follow close behind. In the meantime, if SPACs continue with their frothy popularity, lawsuits targeting SPACs should continue to rise irrespective of how the greater market performs.