This photo taken on July 8, 2022 shows Elon Musk's Twitter page on a smartphone with the Twitter logo in the background in Los Angeles.
Photographer: Chris Delmas/AFP via Getty Images

When the circumstances surrounding a merger or acquisition change, depending on the terms, deal parties can terminate the deal, but they may also renegotiate and amend the terms of the transaction. Given a recent high-profile (and for the moment) purportedly terminated takeover, as well as the recent uptick in deal terminations, I wondered (1) how often do deal parties amend their M&A agreements, and (2) when do these amendments happen?

After I reviewed 207 publicly filed amendments to Delaware-governed M&A agreements, the answers appear to be: (1) not exceedingly often; and (2) on average, a matter of months—not years—following the execution of the original agreement.

The 207 amendments reviewed were dated from Jan. 1, 2017 to July 21, 2022, and although some represented a second, third, or fourth amendment to the same M&A agreement, each one was a discrete document and made distinct changes to the M&A agreement it amended. 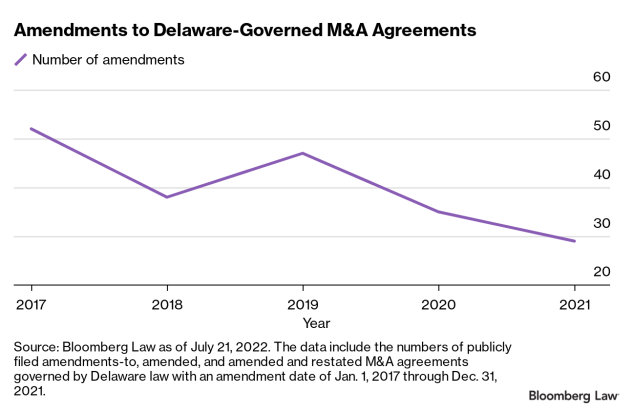 Only seven Delaware-governed amendments have been publicly filed so far this year, compared with 19 during the same period in 2021. But there has been an increase in overall deal terminations in recent months, so it is possible that some of this year’s deals currently categorized as terminations may actually result in renegotiated deals with amended deal agreements.

How Amendments Are Made 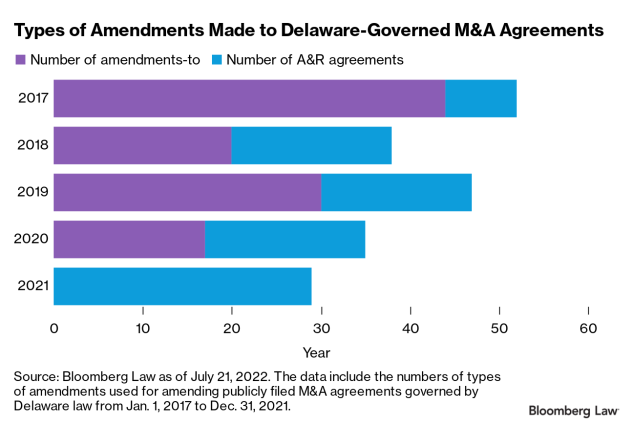 In “A&R agreements,” the entire M&A agreement is reproduced, amended, and executed by the parties, which can make it more difficult to identify the actual, specific changes in the agreement. Nevertheless, this type of amendment may have become the preferred method because it has the advantage of avoiding the need for deal parties to keep track of multiple documents that, together, constitute the whole agreement.

“Amendments-to” house their amendments in a separate document, but they do clearly identify which sections and subsections of the M&A agreement are being changed.

The amount of time that passed between the original M&A agreement date and the date of the amendment in the 207 amendments reviewed ranged from zero days (the original agreement and amendment were dated the same day) all the way to 1,251 days, which is a little over three years.

That being said, the average number of days between the original M&A agreement date and the amendment date among the 207 amendments reviewed was 143 days (between 4 and 5 months, approximately).

If we apply this average of 143 days, then a hypothetical future amendment to the April 25 agreement between Twitter Inc. and Elon Musk would fall around September 15, 2022, just before the Delaware Court of Chancery trial is set to begin in October.