In last month’s historic vote for union representation at an Amazon facility in New York City, only 58% of all eligible workers actually cast a ballot. Voter turnout at a second Amazon location in the city was higher—61% of all eligible voters—but the result, announced yesterday by the National Labor Relations Board, was a union loss.

These election results shed light on a paradoxical hidden paradigm in 21st-century organizing: The lower the turnout, the better the results—for labor, not for management.

The trend has been as definitive as it is perplexing. In 2000, voter turnout was an impressive 85%. But all of those votes didn’t help unions much; labor was successful in only 53% of those elections. By 2010, turnout had slipped to 81%—but the win rate for unions improved to 67%. 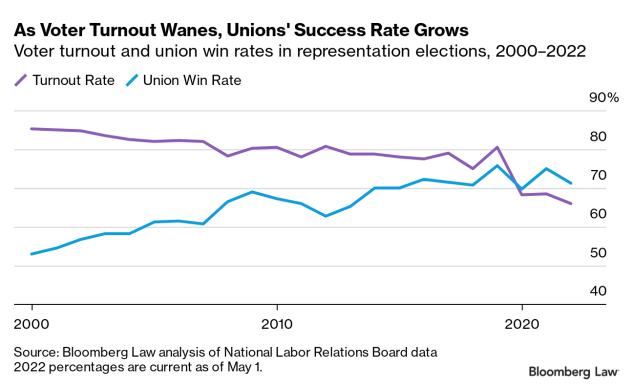 The two converging trajectories finally collided in 2020, with a turnout rate (68%) that was actually lower than the union win rate (70%). That trend has continued through 2021 and into this year.

It’s counterintuitive to think that lower turnout would favor labor over management. Aren’t unions the ones always trying to get out the vote, while employers constantly seek to dampen voter enthusiasm?

Yes—and therein lies an intriguing reason why this might be happening: Some workers do appear to be discouraged from voting, but they’re not the workers you’d suspect.

The fact is, despite employers’ anti-unionization efforts over the past two decades, the percentage of workers who vote in favor of union representation hasn’t gone down at all. 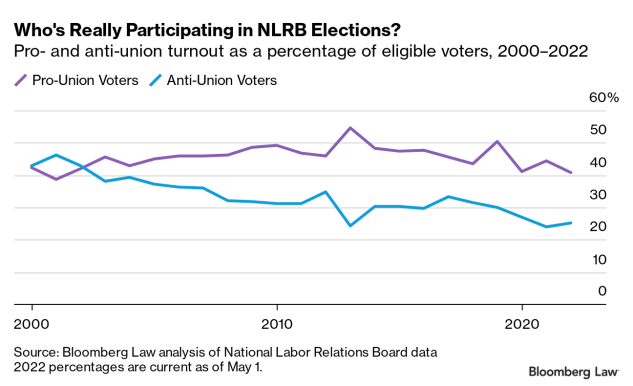 In the early 2000s, “union yes” and “union no” voters turned out in roughly equal measure; each comprised a little more than 40% of all eligible voters in NLRB elections. And 20 years later, “union yes” voters are still making up more than 40% of possible workers, while “union no” voters account for only about 25% of the voter pool. The percentages for both groups have fluctuated along the way (ranging between 39% and 55% for “yes” voters and between 24% and 46% for the “no” voters), but the overall trend for the “no” voters has been a downward one, while the “yes” voters have maintained a better-than-40% turnout rate.

That’s why union organizers are benefiting from the low turnout trend: Their supporters aren’t the ones who are choosing to stay home when it’s time to vote.

This raises a question: For all that employers are spending on outside consultants to curb pro-union voting and boost anti-union voting, will a 20-year trend in the opposite direction cause them to start rethinking their investment?