The pandemic-related lockdown continues to affect all market participants, including activist investors. Numbers remain down, but activists may well be poised to take advantage of reduced stock prices and distressed companies to ramp up the number of campaigns. 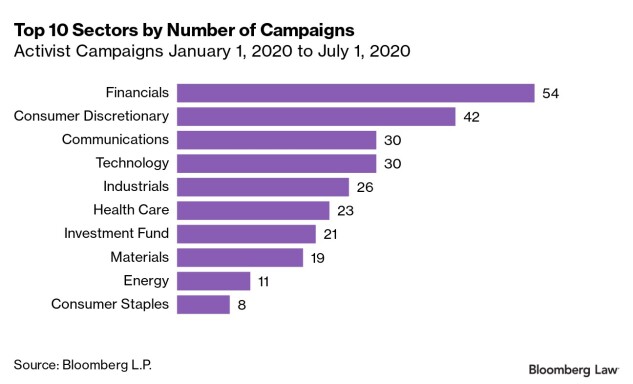 According to data from the Bloomberg Terminal, activists have targeted the financial services sector most often in the first half of 2020. Activists often engage with financial services firms during times of consolidation. The year began with significant merger and acquisition activity, with large numbers of interested acquirers holding large cash reserves in a low-interest environment. Those numbers dropped significantly as the shutdown rippled through the economy.

Overall, the number of activist campaigns is down significantly from 2019. As the economy inches toward reopening, however, activist investors will likely follow in that wake, and year-end numbers should show some rebound.