The union organizing election currently under way at Amazon is historic, and it is big. But it is also historically big.

The Retail, Wholesale, and Department Store Union is seeking to organize 5,800 warehouse workers in the e-commerce giant’s Bessemer, Alabama facility. If the RWDSU prevails, the Amazon vote will result in the largest number of workers gaining union representation in a single NLRB election since 1991.

But the scope of the election underscores an intrinsic problem for the union: Successful organizing efforts of this size are so rare at the NLRB, they’re almost unheard-of.

Since Bloomberg Law started tracking NLRB data in the late 1980s, only six union petitions that targeted 5,000 or more unorganized workers have made it to the election stage. For perspective, the NLRB oversaw 933 total representation elections in 2020 alone, and that was a down year. 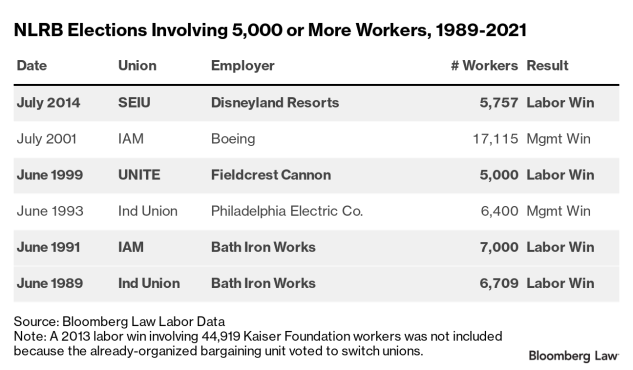 For what it’s worth, four of the six elections were won by labor. But four wins in more than three decades don’t make for much of a bellwether. The data I’ve analyzed suggest the opposite: that unions aren’t landing the big targets. Indeed, they are barely even taking aim.

Take the last five years. The NLRB has received more than 8,800 petitions to organize workers, but only two of those petitions covered more than 5,000 workers. The first petition, in 2018, involved some 6,200 food service and other workers at Disneyland Resorts but never took the next step of an election, despite Disney’s history as a heavily unionized employer. Amazon is the second.

Why don’t more unions go big? Part of the answer is just plain old scalability: There are only so many nonunion organizations that could accommodate a cohort of workers big enough—and, under the NLRB’s community-of-interest requirements, cohesive enough—to even be eligible for representation by a single union. It would practically have to take a company as new and as sizeable as Amazon to present such an opportunity.

But it’s also true that larger bargaining units are historically harder for unions to organize than smaller ones. According to Bloomberg Law’s 2020 NLRB Election Statistics report, unions attempting to organize groups of 500 workers or more had nearly a 2-to-1 success ratio in the past five years, compared with 3-to-1 for groups of fewer than 50.

Unions know those odds, and employers do too. That’s what leads to frequent but rather counterintuitive NLRB disputes in which unions try to spin “micro-units” off from larger groups to organize independently, while employers try to fend off such moves in the hopes of keeping potential bargaining units big and dissolute.

If the RWDSU bucks this smaller-is-better trend with a big win, it could put other large-scale worker groups in play for union organizing efforts in future months.

This article was revised on March 14, 2021, to clarify that the Amazon election would result in the largest number of workers gaining union representation in a single NLRB election since 1991.