How successful are shareholder proposals? Bloomberg Law takes a look at topics, sectors, proponents, companies and outcomes, based on our analysis of no-action letter requests filed by issuers to exclude shareholder proposals. The analytics track only those proposals that have been the subject of an exclusion request, and do not reflect proposals that companies have voluntarily agreed to include in their proxy materials.

The graphics reflect requests handled by the SEC’s Division of Corporation Finance from the beginning of 2019 through October 21, 2019. Many of the results are similar to the 2018 numbers. Proposals by John Chevedden have been the subject of the most exclusion requests in both years by a large number. Issuers have most often targeted the financial and consumer discretionary segments, and the topics of human rights, social issues and environmental matters.

One development makes the 2019 numbers stand out: this may be the last year that we compile this information. The division announced a fundamental change in the way they handle exclusion requests. In September 2019, the staff stated that they “may respond orally instead of in writing to some no-action requests.” The staff will likely issue a response letter if the request is one that would provide “more broadly applicable guidance about complying with Rule 14a-8,” but in most cases, staff responses will not be made public next proxy season. 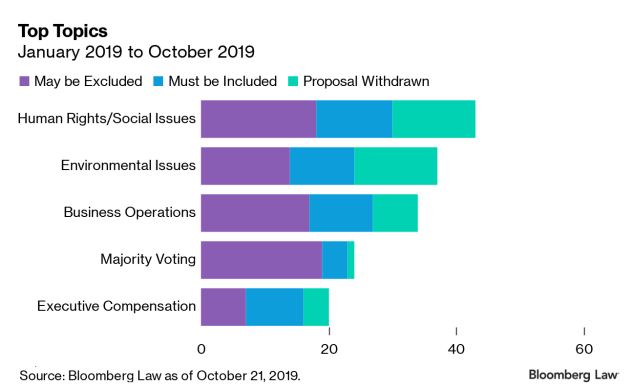 1) Once again, human rights and social issues were the most frequent subjects of no-action exclusion requests, followed by environmental issues.

2) Companies were successful in excluding approximately 41% of the human rights and social issue proposals in 2019, and 38% of the environmental proposals.

3) Proponents withdrew 36 percent of the top five proposal categories in 2019, suggesting engagement between issuers and the proponents.

4) The staff allowed exclusion of half of all the proposals dealing with business operations. Companies often used the “ordinary business provision to exclude these requests.

6) Few executive compensation proposals (35%) were subject to exclusion. As described in Staff Legal Bulletin No. 14J (CF), senior executive or director compensation questions are generally not excludable because they involve significant policy questions. 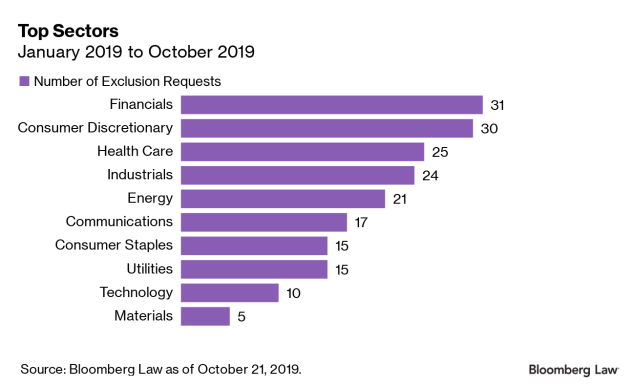 For the third year in a row, companies in the financials and consumer discretionary sectors requested the largest number of proposal exclusions. Health care companies came in third, a repeat of 2018. Materials again filled the last spot in the top ten list. 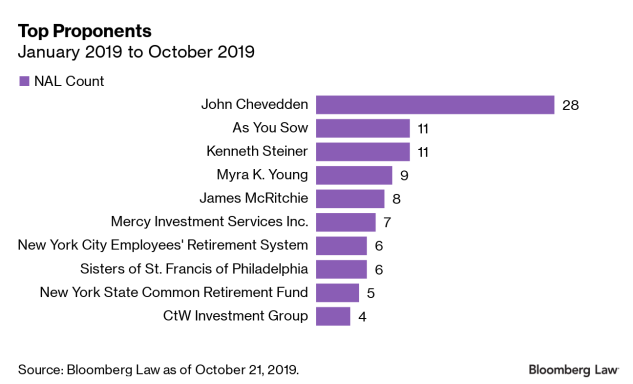 1) Once again, John Chevedden tops the list. Companies sought to exclude his proposals at more than twice the rate of any other proponent.

2) The “power couple” of husband and wife team James McRitchie and Myra K. Young were the subject of a combined 17 exclusion requests.

3) There have been legislative proposals to increase the current ownership threshold of $2,000 in issuer stock, and participants in the SEC’s 2018 Proxy Roundtable discussed the issue. It did not appear to be a high priority at that time for the Commission, but the issue remains a contentious one. 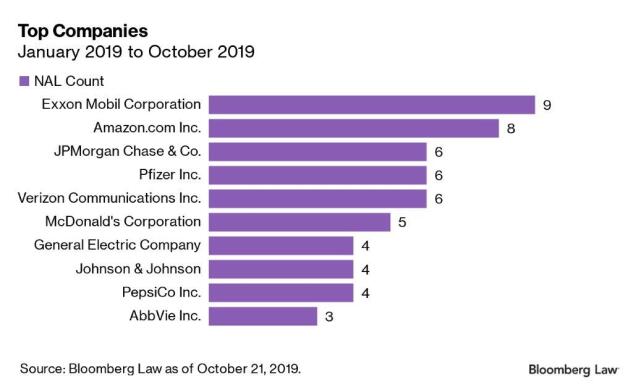 1) A striking figure of this graphic is the relatively low number of exclusion requests submitted by some of the largest corporations in the world. ExxonMobil Corp. is leading the way with nine requests (Amazon had nine requests in 2019). Proponents of imposing restrictions on the shareholder proposal process cite costs and administrative compliance burdens of the process. These 10 companies only sought to exclude a total of 55 proposals in the first 10 months of 2019.

2) The list changed significantly from 2018. Only Amazon, JPMorgan Chase & Co. and General Electric Co. made the list both years.

1) The SEC is on pace to handle slightly fewer no-action letter requests in 2019 as compared to the previous year. The early-year government shutdown may have played a part in the lower number of actions.

2) The percentage of proposals that the staff required companies to include to date is comparable to 2018 results.

3) To date, significantly more proposals are being withdrawn as compared to 2018 (26% to 19%), suggesting continued engagement between issuers and proponents.

--With assistance from Conor MacCaffrey.