Last year was another stellar year for mergers and acquisitions and investment activity in Silicon Valley. Google still reigns as top buyer, and software is still the top destination for Silicon Valley firms’ dollars. But will the market let this year finish strong?

The number of M&A and investment deals involving the 150 largest publicly traded tech and life science firms in Silicon Valley (ranked by 2021 revenue) on the 2022 Fenwick–Bloomberg Law SV 150 List climbed even higher than in the pandemic-defying, record-setting year of 2020. A total of 389 transactions involving SV 150 firms were announced last year. The 2021 result is consistent with global technology sector M&A and investment activity in 2021, which saw a 74.6% year-over-year increase in deal volume and a 58.4% increase in deal count. 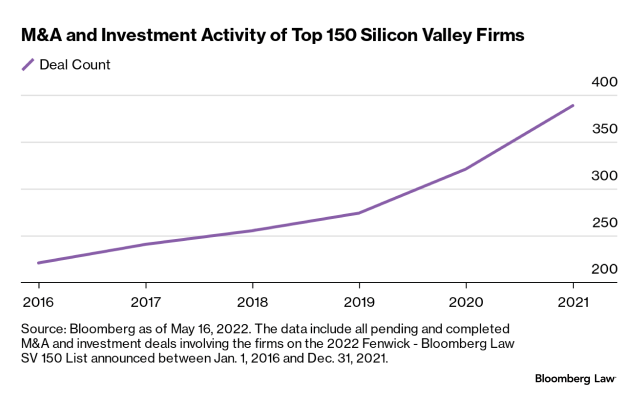 Google (Still) By Far the Top Buyer in the Valley

2021 marked the fourth consecutive year that Google’s parent Alphabet Inc. has been the most active acquirer and investor among all the firms on the Fenwick–Bloomberg Law SV 150 List. 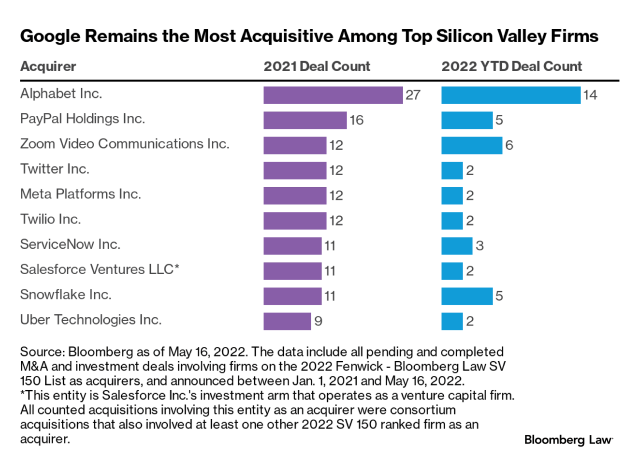 In 2021, Alphabet Inc. was the acquirer or investor in seven currently pending or completed M&A deals and 20 investment deals, the majority of which were venture capital fundings. PayPal Holdings Inc. (four M&A deals, 12 investments) came in next with 16 deals as acquirer, followed by Zoom Video Communications, Inc. with 12 (two M&A deals, 10 investments).

Another acquisitive firm to watch is NVIDIA Corp., which was the buyer in seven deals announced in 2021, and seven deals thus far in 2022.

As with past years, by deal counts, Google continues to stand out as markedly more acquisitive when compared to the other four firms that rank in the top 5 on the SV 150 list by revenue. Though Apple Inc. takes the No. 1 spot on the list by revenue, since last year it has been a party to less than one-fifth the number of transactions as Google has. Meta Platforms Inc., which ranks third by revenue on the list, has been a party to about one-third as many.

It’s All About Software

By target sector deal count, software is still what the top firms are acquiring most. While SV 150 firms continue to pursue investments in a variety of industries, from advertising to transportation, the most common target industry since the beginning of last year has been software. Of all 514 deals involving an SV 150 firm as an acquirer announced between Jan. 1, 2021, and May 16, 2022, nearly half (241) involved targets in the software industry, with 144 of those in the applications software subgroup. In short, nothing new to see here; this breakdown lines up with last year’s results covering 2020 and the beginning of 2021.

The same also continues to be the case with Silicon Valley’s top buyer. Google’s 41 M&A and investment targets since the start of 2021 have represented a wide range of tech and non-tech industries, but—as with the SV 150 overall—applications software was its most common target industry (13 deals), followed by diversified financial services (four deals, including Google’s $1 billion equity investment in derivatives exchange operator CME Group) and the internet sector (also four deals).

Of Paypal Holdings Inc.'s 21 deals in which it was an acquirer during the same period, roughly half involved software targets, four involved internet targets, and three involved diversified financial services targets.

The SV 150 firms defied—and some even thrived in—the initial shocks of the pandemic. Could this year be different?

According to Bloomberg News, last week global stocks saw the longest weekly losing streak since the financial crisis, with major tech stocks seeing deep losses. By another metric reported by Bloomberg News last week, tech and megacap growth stocks sold off “at the fastest pace since the dotcom bust of 2000.” This current market tumult, reportedly fueled by recession fears, increasing inflation (and the Fed’s responses), ongoing pandemic impacts, and the Russia-Ukraine war, is impacting Silicon Valley firms. There’s a possibility that 2022 may finish with less stellar results, and that 2023’s SV 150 list and related M&A and investment activity will end up looking markedly different than in recent years.