The Amazon.com logo appears on a box in one of the company's fulfillment centers.
Photographer: Krisztian Bocsi/Bloomberg

workers at a facility in New York voted not to join an upstart union only weeks after the group won a resounding victory at a warehouse across the street.

The election at the LDJ5 sorting center in Staten Island wasn’t close, with the Amazon Labor Union garnering just 380 yes votes to 618 nos.

The defeat is a setback for the ALU, which was looking to increase its bargaining power by repeating the success of the previous vote at the JFK8 fulfillment center. But it was welcome news for Amazon, which last week reported dour financial and acknowledged it has too many workers now that the pandemic-related surge in online sales has slowed. The results spooked Wall Street, and sent the shares reeling.

The second election involved a much smaller facility than the first vote, and ALU founder Christian Smalls had earlier predicted that Amazon would fight “three times, four times harder” to deny the ALU another victory. Still, the first win was momentous, helping Smalls raise money and win support from powerful politicians, including Senator , Representative and President . 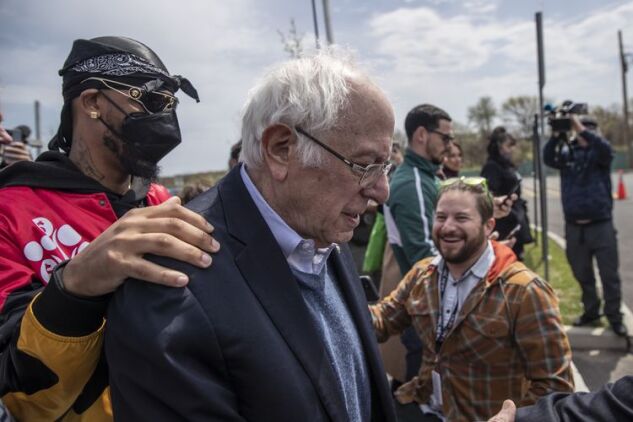 Sanders last week sent a letter to Biden urging him to cancel federal contracts with companies that violate U.S. labor laws and has scheduled a hearing on the matter this week. While Biden is unlikely to cancel Amazon’s federal contracts, his administration is working to make it easier for workers to join unions.

Nelson Lichtenstein, who directs the Center for the Study of Work, Labor and Democracy at the University of California at Santa Barbara, said the loss won’t derail the ALU.

“They’ll try it again and again and again,” he said in an interview before the votes were tallied. “There’s enough ‘oomph’ going on that I don’t think it would be a huge setback.”

Moreover, the ALU is trying to organize two more Amazon facilities in New York and says company workers across the U.S. have gotten in touch for advice on how to unionize their own facilities.

In conceding the loss, the ALU tweeted: “The organizing will continue at this facility and beyond. The fight has just begun.” Amazon spokesperson Kelly Nantel said: “We’re glad that our team at LDJ5 were able to have their voices heard. We look forward to continuing to work directly together as we strive to make every day better for our employees.”

The company, working from its customary playbook, contested the second election with mandatory “information sessions” for workers. Smalls and his lieutenants described the efforts as union-busting and said the company shooed organizers off the facility’s property.

Amazon, meanwhile, is fighting to get the JFK8 vote overturned. In a filing to the National Labor Relations Board last month, the Seattle-based company said the agency repeatedly “failed to protect the integrity and neutrality of its procedures” by turning away voters.

The NLRB also allowed media and union representatives to stay too close to the voting area, Amazon said, among other objections. A hearing is scheduled for May 23.