Although top U.K. law firms as a whole have narrowed their gender pay gaps, statistics show that men still dominate the highest-paying jobs.

Two years after enactment of new reporting regulations, a Bloomberg Law analysis of figures reported by the five Magic Circle firms found that on average across those businesses, women’s median hourly wages were 29.7 percent lower than men’s in 2018.

The top law firms still lag behind the rest of the U.K. private sector. Across all of the the 8,424 private sector employers that reported data, the 2018 median gender pay gap was 17.9 percent in 2018, according to the Government Equalities Office.

The U.K.’s disclosure requirements have already put pressure on law firms to close their gender pay gaps, but experts say it may still take a few years to see significant progress.

In this year’s disclosures, some of the Magic Circle firms saw their gaps widen, while others inched a little closer to equal pay.

Freshfields, which saw its employee gender wage gap decrease from 13.3 percent to 6.2 percent, said the changes are a “reflection of population changes, including some women hires and promotions into more senior roles within the firm.”

Several firms noted that the gender pay gap can be attributed in large part to a higher percentage of women in administrative roles which tend to pay less.

Allen & Overy, which had the biggest pay gap increase among employees, said that more than 25 percent of its people in London were women in “business support.”

Linklaters said in its report that “we have more men in the most senior roles and a higher proportion of women in secretarial and junior business team roles, which predominantly fall within our lowest pay quartile.”

The U.K. gender pay gap reporting regulations require organizations in Britain with more than 250 employees to report their gender pay gaps to the government each year. Employee pay includes bonuses during the reporting period. 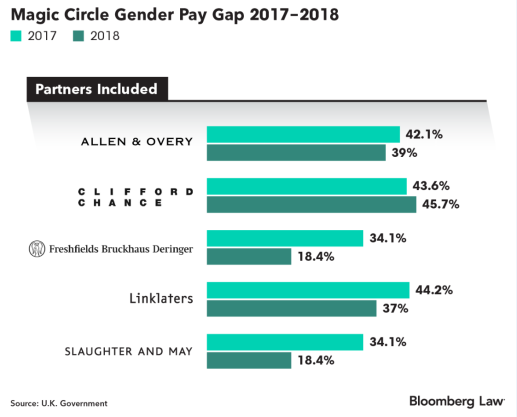 The data does not indicate, however, if men are being paid more than women for doing the same work, Hamermesh stressed.

“I would love to see, for each partner in each of these firms, their age, their total experience, their salary, bonus, and firm name, and I would love to do regressions on that,” Hamermesh said. “You need those controls to be able to say something.”

Along with their data, organizations reporting to the government have had the option of submitting a voluntary report outlining their strategies for addressing the gender pay gap. All five Magic Circle firms did so.

“That’s really what the government wants, what women want,” said Helene Reardon-Bond OBE, former director & head of gender equality at the U.K. Government Equalities Office. “For the employer to really drill down into the calculations and work out in their individual firm what’s going wrong and what they can do to correct it.”

Reardon-Bond isn’t surprised that there hasn’t been a huge change in the gap yet. “If any of the firms implemented any strategies last year they probably wouldn’t have kicked in or had any effect in just one year,” she said, adding that she wouldn’t expect to see real progress until “after year three.”

Seven of the top 10 AmLaw100 firms reported their gender pay gap data to the U.K. government because of their presence in the country. Kirkland & Ellis, Latham & Watkins, Baker McKenzie, DLA Piper, Hogan Lovells, Jones Day, and Norton Rose Fulbright turned in figures, though they only included firm employees working in the U.K.

The average 2018 pay gap among those U.S. firms was similar to the Magic Circle, with women earning 33.2 percent less than men. There was a greater variance in U.S. firm data, however. Jones Day reported a gender pay gap of 0.5 percent, while Kirkland & Ellis reported a gap of 62.2 percent.

“In the London office, all of our secretaries are women,” Kirkland & Ellis said in its report. “As such, the median pay and bonus gap percentages result from comparing the pay and bonus of a secretary to that of a lawyer.”