, one of the largest airlines yet to be forced into bankruptcy by the coronavirus pandemic, will look to compete with the growing number of low-cost carriers in Latin America once it emerges from Chapter 11.

The region’s second-largest airline will trim its fleet and streamline the business during the reorganization process, Chief Financial Officer said in a radio interview with Pauta Bloomberg in Chile Thursday.

Airlines in Latin America have been hit particularly hard by the coronavirus pandemic as governments across the region banned travel, forcing carriers to ground planes. Avianca and its competitor filed for Chapter 11 in New York this month, becoming the most prominent of the more than dozen airlines globally to file for bankruptcy during the crisis.

But even before the pandemic, low-cost carriers like Viva Air Group, Wingo and JetSmart Airlines SpA were gaining market share in the region, particularly on short-haul domestic flights. Avianca plans to reduce its cost structure during the bankruptcy process, Neuhauser said.

“We’re going to defend ourselves from this” competition, he said. “We’re working to make sure that we can lower our costs as much as possible to offer prices that are more and more competitive.” 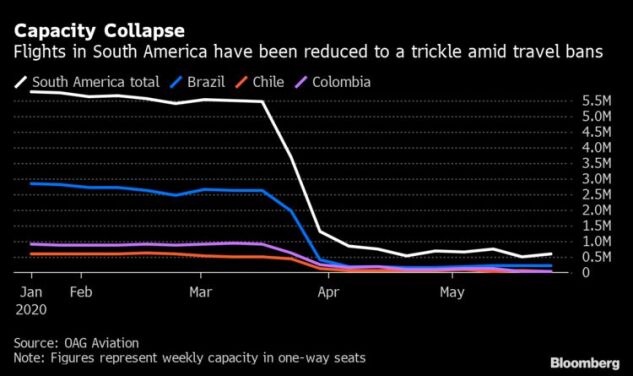 The airline remains in talks with the Colombian government for financing to help it keep operating during the bankruptcy process, after the travel bans are lifted, Neuhauser said. Air travel is vital to the country of nearly 50 million, which is split by Andes mountain ranges and plagued by a poor system of highways that makes travel by road difficult.

“It’s a country that has long relied on airlines,” Neuhauser said. “The government has recognized from the beginning of this that we are essential and they’re looking to help us.”

A spokeswoman for the Finance Ministry said talks are ongoing.

Air travel in Latin America has been reduced by about 93% as countries extended travel restrictions, including some of the strictest bans in the world in the cases of Argentina and Colombia. Yet, governments have so far failed to provide the type of financial support to the industry that airlines in the U.S. and Europe have received.

Globally, about $123 billion in aid has been promised since the pandemic began, with governments in Latin American pledging the least of any region, according to a report from the International Air Transport Association. However, conversations with various governments are underway, Peter Cerda, the association’s regional vice president for the Americas, said in a press briefing Thursday.

“We need governments to step up to the plate and provide financing,” he said, adding that the region is likely to see more Chapter 11 restructurings or airlines ceasing operations as the travel shut downs continue.

Even after the bans are lifted, the industry is likely to suffer lasting consequences as passengers fly less for pleasure and companies cut back on business trips, Neuhauser said. By the end of 2021, he expects demand to be about 20% lower than it was at the end of 2019.

“The industry is going to be structurally smaller,” he said.

To contact the reporters on this story:
in Bogota at efieser@bloomberg.net;
in Santiago at ethomson1@bloomberg.net