Two dozen major Toronto employers -- including Canada’s key banks and insurers -- agreed to keep most of their downtown staff at home until at least September to help contain the spread of Covid-19, said the city’s mayor, .

The agreement, which also includes telecom companies, accounting firms, lifecos and universities, comes at the request of the city and Tory, who is concerned about a potential flare-up in the pandemic if too many people flood the downtown core as restrictions are lifted.

“We do not want the sacrifices that all of you have made out there to be in vain,” said Tory at a press conference on Friday. “We do not want to have to go back to a more stringent lockdown. We want to do whatever we can to minimize any second or third wave of this virus.”

Big banks and other companies in financial centers across the world are making plans for some employees to return to the office as the pandemic eases. JPMorgan Chase & Co. expects to keep its offices half full at the most for the “foreseeable future” and Goldman Sachs Group Inc. is reopening its Paris office with a maximum of 20% of staff allowed in on any given day. Citigroup Inc. is considering leasing offices in New Jersey and New York suburbs. Its chief executive said the bank plans to bring workers back to the office when the pandemic ends. 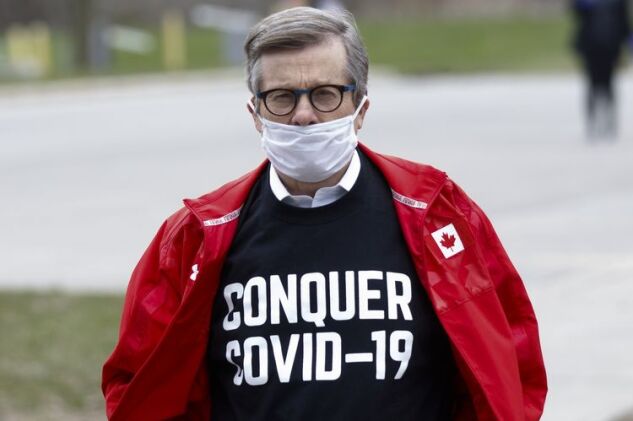 The Toronto region has been one of Canada’s trouble spots for the virus, but the situation has been improving of late. The city has reported 10,901 cases with 810 fatalities since the start of the outbreak. To date, 8,086 have recovered which is an increase of 142 since Thursday.

“Telecommuting, phasing in employees return to work, and staggering start times where possible, will help businesses to maintain physical distancing,” Tory said, in particular by reducing the risk of crowding on the city’s subway system. Ridership on the Toronto Transit Commission has plunged 80% since the lockdown began, he said. Prior to this, the system saw 1.8 million trips per weekday.

, which has operations on both sides of the border, sent out a memo to Canadian and U.S. employees Friday afternoon with return-to-work guidance.

“Given the fluid situation, the majority of you who currently work from home will continue to for some time –- at least until September, and possibly longer,” Kenn Lalonde, executive vice-president of human resources, said in the memo.

Chief Human Resources Officer told Canadian employees in a memo earlier Friday that governments across Canada are asking major employers for support in a gradual and proactive approach to reopening.

“By staggering the flow of people back into city centers, this will help maintain physical distancing and reduce pressure on public transit as more businesses resume operations,” she said in the memo. “As such, for those employees in head office and regional offices currently working remotely, you will continue to do so until September at the earliest.”

Downtown Toronto has become a ghost town since shutdowns to stem the spread of the virus were put in place in early March. Tory said in mid-April that a three-month shutdown and six-month recovery period will cost the city about C$1.5 billion ($1.09 billion) in a “best-case” scenario.

“This economic restart cannot stall. It must not stall for the benefit of Torontonians and our city and our country,” Tory said.