The US Supreme Court since August has issued more emergency orders than opinions in cases that got fully briefed and argued despite several justices expressing misgivings about the practice.

The most conservative justices signaled they wanted to use what’s known as the shadow docket even more aggressively. Clarence Thomas, Samuel Alito, and Neil Gorsuch dissented most often when the court refused to act on expedited appeals.

“What stands out is that voting trends between the two dockets are similarly ideologically patterned and that conservative interests are the big winners when the Court grants emergency relief,” said Kimberly Humphrey, federal courts legal director for the progressive advocacy group Alliance for Justice.

The shadow docket isn’t new. It’s intended to provide a mechanism for dealing with issues that need immediate attention before there’s “irreparable harm"—with no argument, abbreviated briefing, and often little to no explanation.

Long ignored by court watchers, this route for deciding cases has grown in significance in recent terms. Coined the shadow docket in 2015 by University of Chicago law professor William Baude, the court used it to decide hot-button issues from abortion to voting rights to Covid policy. It often foreshadows how cases on the merits docket might ultimately come down.

Since August 2021, the justices have issued 66 emergency orders, compared to the 60 merits opinions that make up the bread and butter of their work. 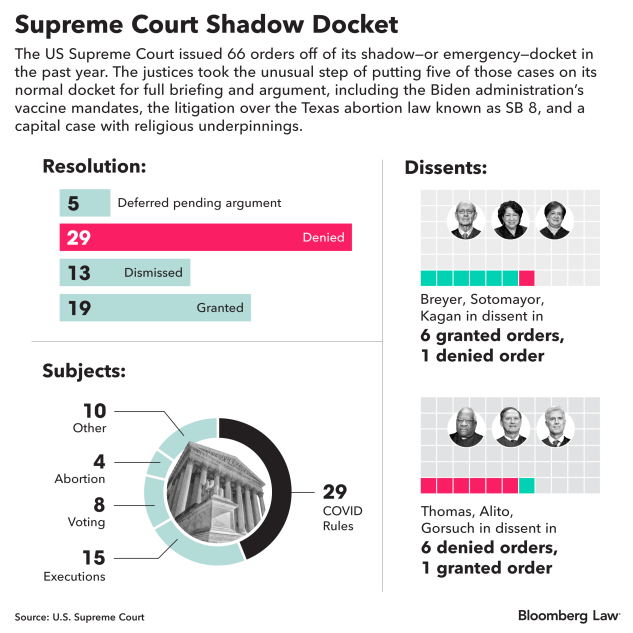 Execution-related appeals, often time-sensitive, are a common example of shadow docket cases. But Humphrey said that in the past year, the “court used the emergency docket extremely unconventionally.”

The more than five dozen orders orders included undoing a moratorium on evictions that was put in place by the federal government in response to the pandemic, and allowing for the use of voting maps found to be gerrymandered along racial lines. The court also reinstated executions that were paused by lower courts.

Dissenting from the decision to undo an EPA rule on water quality standards in April, Justice Elena Kagan complained that the ruling “renders the Court’s emergency docket not for emergencies at all.” It “becomes only another place for merits determinations—except made without full briefing and argument,” Kagan said.

Chief Justice John Roberts, who has recently joined with the court’s liberal wing when he thought his fellow conservatives moved too far too fast, joined Kagan’s criticism.

Shadow docket use by the 6-3 conservative majority court also became a political foil with Senate Democrats calling it a potential abuse.

VIDEO: The Shadow Docket and How the Supreme Court Uses It

Approximately 60% of those emergency docket orders were unanimous, with no justice noting their dissent.

While the court’s liberal justices—Stephen Breyer, Sonia Sotomayor, and Kagan—dissented the most in emergency orders that were granted, Thomas, Alito, and Gorsuch did so the most when the court refused to act on an appeal.

James S. Burling, vice president of legal affairs for the public interest law firm Pacific Legal Foundation, said the shadow docket is like a weather vane, and shows how the conservative-majority court is in transition. “During any transition of this sort, there are those who want to accelerate change and those who would rather not,” he said, explaining the breakdowns on the shadow docket.

Legal scholars said a troubling aspect of the shadow docket is that the court often fails to explain its ruling.

“These are cases that underwent full hearings in trial courts, with witnesses and evidence,” Ali said. “And the Supreme Court shrugged all that off without explanation, showing very little prudence or restraint.”

George Washington University law professor Richard J. Pierce, Jr. noted that Justice Amy Coney Barrett recently pushed back on the notion that the justices are justice politicians in robes, urging the public to “read the opinion.”

But the public can’t “read the Court’s opinion if it does not issue an opinion,” Pierce said.

An opinion explaining their reasoning is crucial, he said, “particularly important at a time when reputation of the Court is at an all-time low.”

(Updates with additional details on cases shifted from shadow docket to merits docket.)