The corporate equivalent of panic-buying toilet tissue is coming to an end.

European companies have largely stopped maxing out their credit lines after unprecedented help from governments and central banks calmed the coronavirus panic. Executives at , and say some corporate clients are starting to repay that credit, increasingly confident they will be able to tap public markets if needed.

The rapid drawdowns in March put risk officers at many European banks on alert as they exacerbated a depletion of capital cushions. As that trend ebbs, it removes one headache from the banks as they stare into the worst recession in almost a century.

“You had this situation where companies were saying ‘crikey -- I’d rather have the cash in the bank,’” rather than just a promise that credit is available, , chief financial officer of Standard Chartered, said in an interview. “After three to four weeks, people realized this wasn’t a banking crisis, and that sitting there with cash without great purpose wasn’t a great move.”

As the pandemic spread across Europe in March and governments imposed lockdowns, companies including , , and Loxam SAS announced they had largely -- and sometimes, completely -- exhausted their credit lines. Several said they didn’t really need the banks’ money, and tapped credit as a precautionary measure. 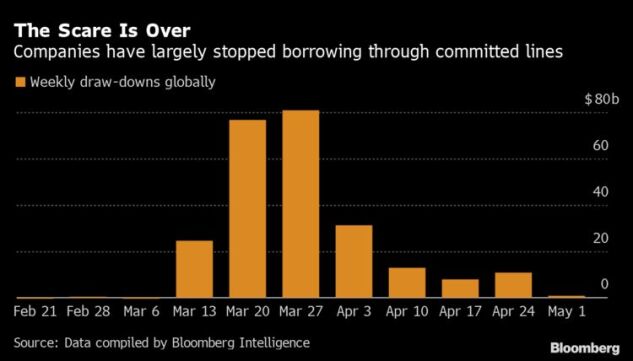 Standard Chartered said in a presentation Wednesday that as drawdowns peaked in March, about $5 billion of loan facilities were used by clients. But in the week of April 14 to 20, a net $200 million was repaid.

By the end of March, the situation reached a turning point, HSBC Chief Executive Officer said.

“In the early days of the crisis, the capital markets were not open, or open to the degree that they are now,” Quinn said on a conference call as the bank reported earnings this week. “As the capital market started to reopen and liquidity was available in those markets, we have seen a number of clients addressing their liquidity requirements.”

In Germany, Deutsche Bank saw 18 billion euros ($19.5 billion) drawn by clients in the first quarter. By the end of April, the lender was observing the same trends as its British counterparts. “We have seen drawdowns slow and repayments pick up,” said , head of corporate banking.

There’s no guarantee that the current calm will last. The euro area is careening toward the worst recession since the Great Depression, with economists predicting GDP will contract by 5.3% this year. Banks have reported surging credit provisions for the first quarter, and many said that the worst is yet to come.

“There’s plenty to panic about, but I’m not sure it should be revolving credit facility drawdowns,” said , a bank analyst at Investec Securities in London. “I’m much more concerned about banks’ revenue lines at the moment.”

To contact the reporters on this story:
in London at hwilson57@bloomberg.net;
in Frankfurt at sarons@bloomberg.net

To contact the editors responsible for this story:
at achoudhury@bloomberg.net