is throttling down its appetite for acquisitions, which have pushed it to the top of Romania’s financial industry. Instead, the lender will use its surplus liquidity as a buffer to face the economic fallout from the coronavirus pandemic.

Eastern Europe, a region where countries for there quick and decisive response to the coronavirus outbreak, has been a global dealmaking, even as some by the crisis. Romania’s biggest bank is coming off the purchases of two top-10 lenders in the country in the past four years and now wants to use the crisis to prove that it’s not a “one-hit wonder,” Chief Executive Officer said in an interview.

Having surpassed the market share of the local units of and in Romania, the “aggressive” phase of expansion is now going to be on hold for at least two years, he said.

“We’ve grown a lot, so for us buying small banks or portfolios doesn’t make sense anymore,” Tetik said. “An acquisition can be distracting, it takes time and resources. So for us, in 2021-2022 it will need to be a sizable target to attract our interest.”

In Romania, most analysts expect the trend of consolidation in the banking industry to continue. Some lenders, especially the smallest ones, might become targets as a side-effect of the economic slump and as a temporary reprieve granted to borrowers in the form of a moratorium expires. 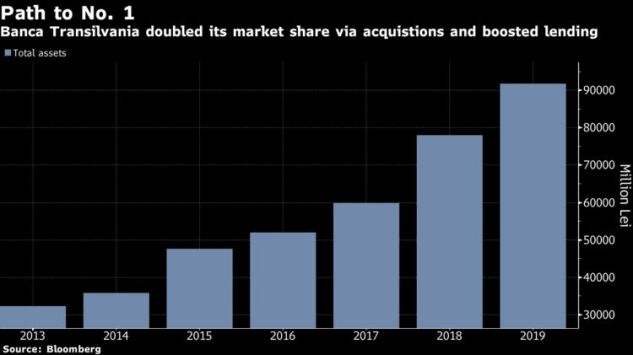 Tetik sees the industry remaining profitable overall thanks to high capital adequacy and liquidity. About 17% of Banca Transilvania’s clients asked for loan repayment holidays, he said.

“The large banks are a bit more resilient and can face these challenges better,” Tetik said.

Having suffered the worst coronavirus death toll in the European Union’s eastern wing, the Romanian government has focused its limited resources mostly toward small companies. For this section of the economy -- which also makes up the bulk of Banca Transilvania’s corporate clients --a guarantee scheme will serve as a good opportunity to grow further, Tetik said.

Banca Transilvania, founded by Romanian businessmen and now with the European Bank for Reconstruction and Development among its largest shareholder, was among the few lenders that were able to to take advantage of the previous financial crisis. It gained market share by purchasing banks such as the local units of and , while also boosting lending. Its assets total 92.2 billion lei ($21.7 billion) and has a market capitalization of 10.9 billion lei.

After posting a profit of 261 million lei in the first quarter, Tetik said the second quarter had “four seasons” for Banca Transilvania, but the recovery exceeded his expectations.

“The second quarter showed us that all the overly pessimistic scenarios were wrong,” Tetik said.

The bank won’t use the waivers granted by the central bank to relax provisioning and capital adequacy requirements, according to Tetik. It also plans to use its existing capital and excess liquidity to meet regulatory requirements.

“We’re not happy that this crisis came but this is our moment to show that our growth so far hasn’t been a one-hit-wonder,” Tetik said. “We’re here to stay and we’re ready to defend our leading position and continue to increase our market share.”

To contact the editors responsible for this story:
at adudik@bloomberg.net