Democrats and Treasury Secretary remained far from agreement after the first day of talks on the next stage for an economic rescue package, even as a crucial aid program for small businesses has run out of money.

The two sides, including staff for House Speaker and Senate Democratic leader , are set to talk again Thursday, and a Senate pro forma session scheduled for 3 p.m. is the next opportunity to act should there be a breakthrough. 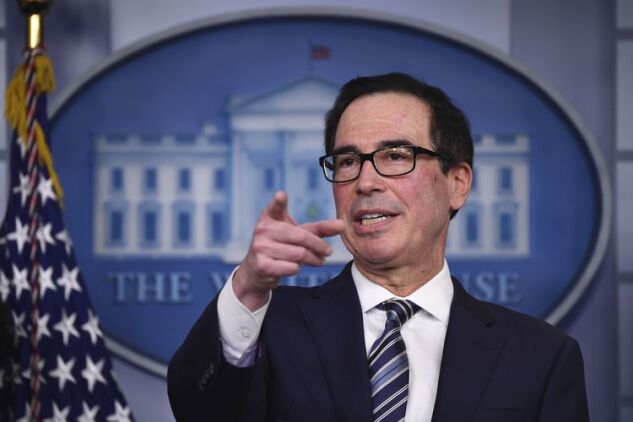 But the chances of that happening are diminishing.

Any action on a deal would require unanimous consent, with Congress not scheduled to return to Washington until May.

The talks are taking place as the $349 billion federal relief program for small businesses has been drained. The Small Business Administration said it has stopped accepting applications and enrolling new lenders.

The pressure on businesses from virus-related shutdowns was illustrated by government data Thursday that showed 5.25 million people applied for unemployment benefits last week, capping four weeks of losses that erased more than 10 years of job creation. The figures suggest an unemployment rate around at least 17% -- far above the 10% reached in the wake of the recession that ended in 2009.

Mnuchin wants to add $251 billion to the $349 billion small business aid program known as the Paycheck Protection Program that ran out of money Thursday. Schumer and Pelosi have been insisting on some changes to the program as well as another $250 billion to aid hospitals and state and local governments.

Neither side appeared ready to give ground.

Pelosi told reporters on a conference call that with negotiations resuming she was hopeful Republicans “will come back with something that strikes a balance on what they are willing to do.”

But House Republican leader said on a separate call that Republicans shouldn’t give Democrats any concession in exchange for PPP funding.

“Why would you have to offer a fig leaf if people are out of work?” he said.

McCarthy said he supports additional aid for hospitals and state governments if needed, but the aid that’s already been provided isn’t depleted yet as the small business program is.

Pelosi and Schumer are beginning to come under pressure from moderates in their party to back down or move quickly to get a deal. Those moderates may be facing political backlash in the Republican-leaning areas they represent.

Democratic Senator of Arizona broke from her leadership Thursday morning in advocating for a quick infusion of cash for the small business program.

“The PPP program is going to run out of funding soon - the Senate should approve add’l funding by unanimous consent ASAP,” she tweeted. “Small businesses need our help to survive during this emergency.”

In the House, some moderate Democrats also are urging their leaders to get a deal done now, according to a Democratic aide.

Representative of Oklahoma, who took a Republican House seat in the 2018 election and is considered vulnerable in November, was one of a number of moderate Democrats who tweeted support for breaking the stalemate and replenishing the Paycheck Protection Program immediately.

Republicans also are ramping up attacks on Democrats over the standoff, particularly focused on Pelosi.

“Come back to Washington and do your job!” President tweeted at Pelosi on Thursday, characterizing her as “incompetent” and a “pathetic puppet” of her party’s left wing.

Pelosi spokesman responded in an email, “Every knock from him is a boost. It’s difficult to imagine more projection in one tweet.”

One issue that has proved contentious is whether and how much aid to send to state and local governments, many of which are starting to furlough employees and employ other spending cuts because their revenue is plummeting.

“It not that we don’t share the value of small business. We do,” Pelosi said. “We’re willing to give them that money.”

But she said that hospitals and state and local governments “on the front lines of the crisis” also are running out of money. She cited pleas from the National Governors Association led by Republican of Maryland and Democrat Andrew Cuomo of New York.

”The question is for Republicans -- why are you ignoring your state?” she said. 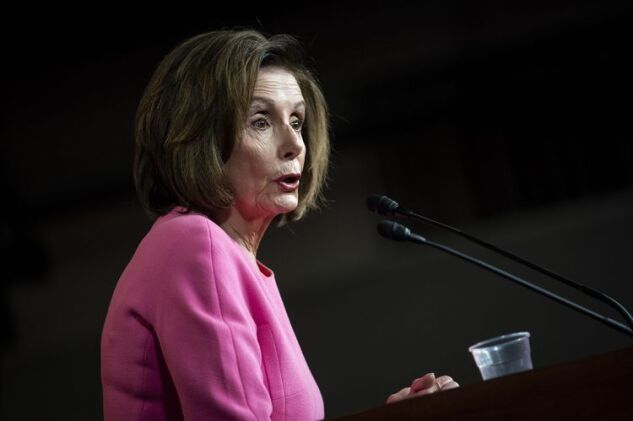 Hogan, the chairman of the governors group, has been leading the charge for a $500 billion aid package, far more than the Democrats are proposing in this round.

On Wednesday, the Democratic governors from three swing states crucial to Trump’s re-election hopes wrote asking the president to quickly get behind efforts to send more support to states and localities.

“Without this leadership, the damage to our state economies will be exacerbated by the cuts we know we will be forced to make,” Michigan’s , Wisconsin’s and Pennsylvania’s wrote.

A brief delay in topping up funds for the small business loan program isn’t as important as addressing obstacles that have been holding up distribution of the loan money to businesses, said , a Yale University finance professor.

“Most of the funds have been claimed but not yet dispersed. It seems to me the bigger issue right now is to get the money out the door,” Metrick said. “The main constraint right now seems to be the operational problems.”

Still, “speed is of the essence” in getting money to small businesses, Metrick said.

Many businesses will have tough decisions on continuing to operate in May as they face new monthly payments for rent, utilities and loans.