A third and fourth month of coronavirus lockdowns could cause a wave of business failures that jeopardizes U.S. lending in a way the nation’s governors and mayors aren’t considering, the chief regulator of national banks said Tuesday.

“The longer this goes on, there will be a cascade of losses,” acting Comptroller of the Currency Brian Brooks said in a Bloomberg Television interview with , adding that those collapses will affect the banks that back the businesses that fail, further hurting credit availability. “Somebody needs to be taking responsibility for the lives that are really being ruined,” he said. 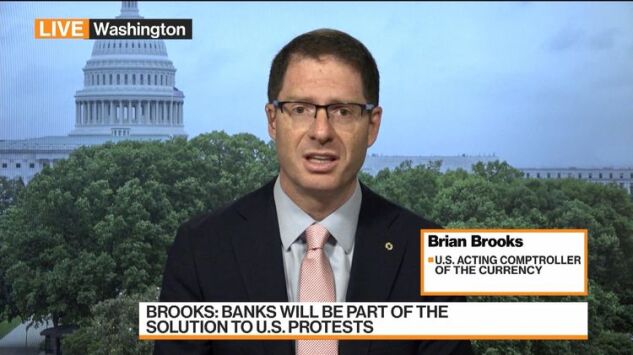 Brooks acknowledged in a separate off-camera interview that he’s not addressing health-care decisions, just underlining dangers that local government leaders may not be evaluating.

“When you balance risks and benefits, you’ve got to know all the risks,” he said.

Brooks took the top job at the OCC last week after the departure of , and the two share a history as former executives of , which Treasury Secretary owned along with a group of investors before selling to Brooks had also been a senior executive at and came most recently from a job as the top lawyer at

When asked whether he intends to seek a nomination to run the OCC if President is elected to a second term in November, Brooks said that he didn’t take the job because of personal ambition and that he’d defer to Mnuchin and Trump on whether he should be elevated to a permanent post.

To contact the reporters on this story:
in Washington at jhamilton33@bloomberg.net;
in New York at dwestin@bloomberg.net