The Federal Reserve could now have as much as $4.5 trillion to keep credit flowing and make direct loans to U.S. businesses through the massive coronavirus stimulus bill being considered by U.S. lawmakers.

The bipartisan agreement, which still needs to be passed by the Senate and House and signed into law by President Donald Trump, will include $454 billion in funds for the Treasury to backstop emergency actions by the Fed to support the U.S. economy, Senator said on Wednesday.

The central bank will work with the U.S. Treasury to use that money as a backstop against credit risk as it supports markets for corporate and short-term state and local debt, while also loaning directly to large and medium-sized businesses.

Its lending facilities have typically required a loss-absorbing cushion of around 10% from the Treasury to protect it from loans that don’t get paid back, a feature that Toomey indicated he wanted preserved. On that basis, every dollar from the Treasury can stand behind $10 dollars lent by the Fed. 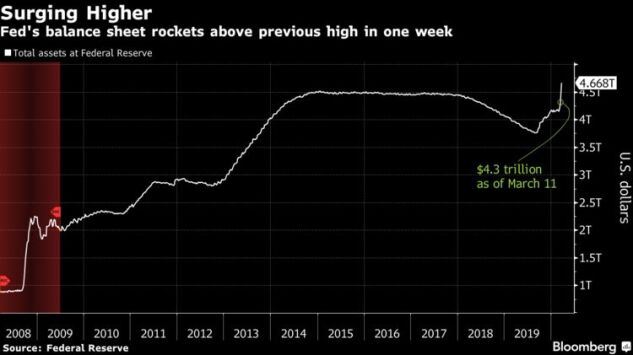 “It is a very, very big thing; it is unprecedented,” the Pennsylvania Republican told reporters Wednesday on a conference call, adding it was an opportunity to lever up “the unlimited balance sheet of the Fed.”

Toomey’s comments suggest Fed facilities could be expanded with the new funds, in effect doubling the Fed’s current $4.7 trillion balance sheet if necessary. On Sunday, Treasury Secretary said the bill would provide up to in liquidity through broad-based lending programs operated by the Fed.

The central bank has launched a dramatic range of emergency measures to shelter the blow from the virus, which has brought important parts of the economy to a grinding halt as governors in several states ordered a stop to all but the most essential activity. It has slashed interest rates to almost zero and is pumping hundreds of billions of dollars into financial markets to keep credit flowing.

Those actions were ramped up on Monday, when the Fed also announced it was also working hard on a Main Street Business Lending Program to support medium-sized businesses.

It also launched two other facilities -- one to support the secondary market for corporate debt, and a second to lend or buy bonds directly from large corporations, an unprecedented bypass of the banking system that has redefined the Fed’s role in economic emergencies. With these moves, the Fed has surpassed actions it took during the 2008 financial crisis and has become the nation’s bridge lender of last resort.

, chief economist at KPMG in New York, said the Fed’s credit facilities are in effect short-term bridge loans critical to keeping both small and large businesses afloat so they can hire back furloughed or laid-off workers when the pandemic subsides.

“There is a transmission channel from large corporations, to small- and medium-sized enterprises and to households” as each tries to extend temporary credit or keep paying staff, Hunter said, adding that the Fed programs will be vital.

“What I am hearing business leaders say is, ‘We don’t want to shut out our customers. If they have a temporary decline in ability to pay, we want to extend credit to bridge them to the other side of the crisis as much as possible,” she said.

The U.S. banking system has already been tapped for hundreds of millions of dollars via credit lines as companies try and shore up short-term cash positions.

To keep credit flowing in the financial markets, the Fed has also launched facilities to support the issuance of commercial paper and asset-backed securities, as well as programs to lend to bond dealers and backstop money market funds.

To contact the reporter on this story:
in Washington at ctorres3@bloomberg.net