The Federal Reserve is preparing for the possibility of an economically debilitating second wave of coronavirus infections even as it’s hoping that can be avoided.

In launching the Main Street and corporate lending facilities this month and starting to buy corporate bonds, the central bank has laid the groundwork for stepped-up support for the economy and financial markets should they be undermined by fresh outbreaks of the virus.

“They want to be ready in case things get worse,” said , chief U.S. economist at JPMorgan Chase & Co. 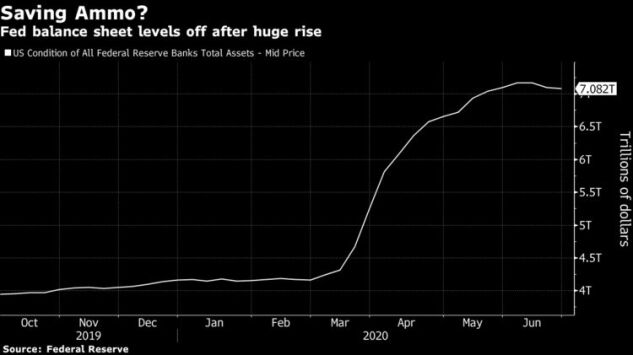 Lawmakers are likely to question Fed Chairman about a resurgence of the virus in some parts of the U.S. when he appears before the House Financial Services Committee on Tuesday with Treasury Secretary .

In testimony prepared for delivery to the committee, Powell stressed the importance of containing the contagion as the economy recovers from its deepest contraction in decades.

“While this bounceback in economic activity is welcome, it also presents new challenges -- notably, the need to keep the virus in check,” he said.

Among America’s most-populous states, Texas, Florida and California are experiencing climbing coronavirus cases even while others, including New York, see declines. Overall, counties accounting for between one-third and half of U.S. gross domestic product are suffering from worsening trends in new cases or Covid-19-related deaths, according to research by Deutsche Bank AG economists.

U.S. stocks rebounded on Monday after dropping to a two-week low on June 26 as increasing virus infections began stopping progress on reopening the American economy, with Texas and Florida halting drinking at bars.

Federal Reserve Bank of Kansas City President , in remarks on June 25, that the U.S. economy is likely to begin recovering in the third quarter, but rising virus cases are a risk to the outlook.

Powell has said that policy makers assumed there wouldn’t be a “substantial second wave” of infections when they penciled in their forecasts for the economy at their last meeting on June 9-10. But he and other officials have made clear they’re primed to do more if a widespread outbreak threatens the economy.

In the event of a severe second wave, , head of central-bank strategy at Evercore ISI, said he expects the emergency credit programs that the Fed has launched during the crisis to morph from being little-used backstops for private-sector lending to becoming front-line providers of finance.

That seems to be how Fed officials are thinking.

In explaining why the central bank started buying corporate bonds this month even though the market for such debt has improved substantially, Powell said the Fed wanted to follow through on its commitment to do so and also show it would be able to act forcefully if the economy worsened.

“We just want to be there if things turn bad in the economy,” he the Senate Banking Committee on June 16. “If things go in a negative direction, we want to make sure that we’re there.”

The Fed has invested about in bonds and exchange-traded funds through its Secondary Market Corporate Credit Facility. The facility, among nine emergency programs the Fed has rolled out since mid-March, has a capacity of $250 billion and is aimed at helping bigger companies cope with the coronavirus contagion.

So too is the Primary Market Corporate Credit Facility, which the Fed opened for business Monday. The program, which is the last of the Fed’s emergency facilities to become operational, is designed to buy bonds directly from companies upon issuance.

The Fed has so far not made any loans under its Main Street Lending Program, aimed at helping smaller firms. Boston Fed President expects participation in the $600 billion program to “build substantially over time,” especially if the U.S. experiences a resurgence of the coronavirus later this year.

“It actually has the potential to be a significant help to a lot of borrowers, both businesses and non-profit borrowers, particularly if the fall ends up being more troublesome than we’re hoping,” he told Bloomberg News in a June 19 .

In his prepared testimony, Powell said the program will begin extending credit “soon.”

Wrightson ICAP LLC chief economist said the Fed might not mind saving a substantial part of its lending capacity as insurance against the risk of future credit crunch, so long as officials are confident that commercial banks are willing to provide financing to such borrowers on reasonable terms.

Former Fed Chairman argued that it’s fine if the Fed’s corporate-credit facility isn’t that active. “It doesn’t need to be big as long as it’s there,” he told a virtual Brookings Institution conference on June 25. “It has succeeded in making the corporate bond market work pretty normally.”

The lack of lending by the Main Street Program is another matter. “That is a concern, both politically and also in terms of getting liquidity to the firms that need it,” Bernanke said.

Lawmakers might press Powell on Tuesday to explain why the Main Street loan facility has been slow to gear up.

They also might call on him and Mnuchin to help borrowers in the commercial mortgage-backed securities market. More than 100 lawmakers wrote to the two policy makers last week warning of a crisis in the market if something wasn’t done.

, head of U.S. economics at Bank of America Corp., said Powell could offer to alter the terms of the Main Street program if needed while reassuring legislators that the Fed is prepared for any financial fallout from a spike in coronavirus cases.

“If the rise in virus cases creates a bout of financial instability and markets react negatively, the Fed has the tools already at hand to address those challenges,” Meyer said.

To contact the reporter on this story:
in Washington at rmiller28@bloomberg.net