For all the bickering among Europeans about a joint response to the coronavirus, there’s one thing they agree on: They need to prevent it from causing a new financial crisis.

The region is relaxing rules on soured loans, allowing banks to tap capital built up over the past years, and even opening the door to bailouts. That’s in addition to several powerful stimulus programs intended to keep the wheels of the economy turning, as well as hundreds of billions in loan guarantees from various governments.

“I’m positively surprised,” said , who oversees 190 billion euros ($209 billion) of stocks as global chief investment officer for equities at Fidelity International. “If there’s one word to describe the response, it is speed.”

The rush to provide relief for lenders underscores a key concern in Europe. Unlike in the U.S., where companies mainly tap bond and stock markets to raise cash, bank lending is still the most important source of funding for European companies and a key conduit for governments to transmit their stimulus. But the region’s banks are also particularly vulnerable, because they are only just emerging from painful restructuring programs and still weakened by negative interest rates and a raft of home-grown issues.

Europe’s bank “system was a great deal more vulnerable to start,” , a managing partner at Washington-based Federal Financial Analytics and an analyst of bank regulations for decades, said in an interview. “Because it is bank-centric, the EU now has little choice but to double-down on its already more liberal and less demanding regime.”

The response by regulators contrasts with governments’ inability to find a common fiscal answer to the crisis. European leaders spent much of Thursday arguing over whether a joint communique would hint at financial burden sharing as a way to repair the damage to their economies. In the end, they left key details to be hammered out in the weeks ahead.

While banks enter the crisis with stronger capital buffers, they are at risk at many fronts. German lenders have long struggled with low profitability, with posting five straight years of losses. Along with , it’s heavily exposed to Germany’s export economy. Commerzbank also has about 9.5 billion euros worth of exposure to Italian sovereign bonds. 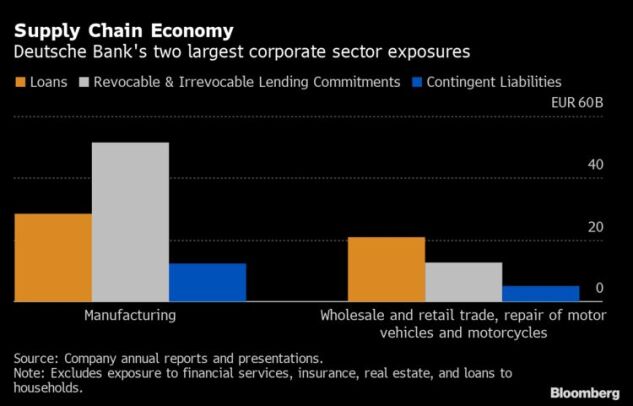 Lenders in Italy, the epicenter of the virus outbreak in Europe, are still weighed down by the biggest pile of bad debt in the region, even after reducing that burden over the past years. In addition, their large holdings of Italian government bonds makes them vulnerable should Europe fail to prevent another sovereign debt crisis.

In a sign how nervous markets are, and UniCredit SpA, along with Deutsche Bank, led a surge in credit risk at European lenders in the early days of the crisis. 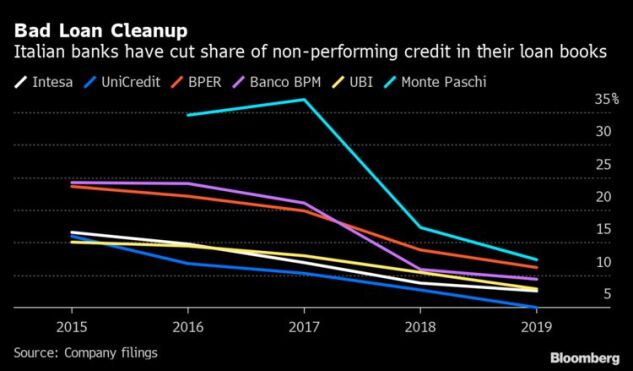 “German and Italian banks should welcome this package more than anyone else,” said Boscher at Fidelity International. “Banks with low capital levels or high amounts of non-performing loans are happy to see any initiative to mitigate the impact and give them more time to deal with those issues.”

French banks, meanwhile, are on the hook because they’re heavily exposed to oil and gas companies, which are struggling amid a price war between Saudi Arabia and Russia. The four major French banks have some of the highest exposures out of all major European banks to the oil and gas sector, according to company filings. 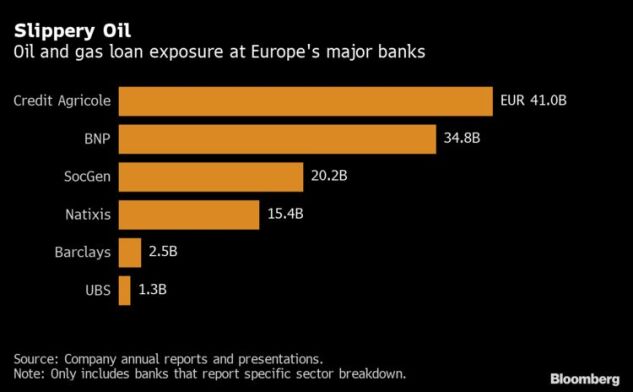 As a group, banks are the worst-hit industry after travel and leisure companies since Europe’s stock selloff started in late February, losing more than a third of their value. The picture isn’t much better for bonds. Moody’s Investors Service on Thursday cut its outlook for half a dozen of the region’s national banking systems to negative.

To soften the blow from rising defaults, the European Central Bank has freed up 120 billion euros of equity it pushed banks to set aside over the last five years against their resistance. The ECB also refrained from lowering interest rates even further below zero, a move that would have imposed more pain on lenders, and regulators are suspending stress tests.

Arguably the biggest benefit is encouraging banks to rely more on their own judgment when deciding whether to set aside money for loans that run into trouble. The ECB is also allowing banks to take their time in tackling bad debts that built up over previous years.

Behind the scenes, officials are also studying options to soften the impact of accounting rules that require banks to recognize losses at an earlier stage. Global regulators in the Basel Committee on Banking Supervision have started to assess further steps to help banks weather the fallout of the coronavirus.

Bankers for their part are keen to show they can help solve the crisis this time, rather than cause it. Many of them were bailed out during the 2008 financial crisis, and several still haven’t emerged from partial government ownership. Some still face curbs on bonuses, and all have to contend with a generally hostile public perception of their role in the economy. 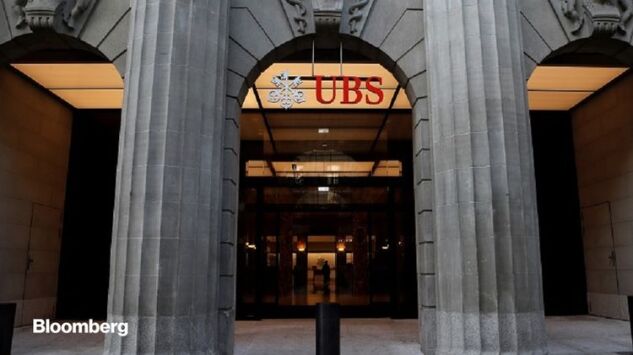 Sergio Ermotti, chief executive officer at UBS, discusses the role of banks in helping the global market deal with the coronavirus pandemic. He speaks with Bloomberg’s Manus Cranny on “Bloomberg Surveillance.”
Source: Bloomberg)

“We want to be part of the solution,” , chief executive officer of , said in an interview with Bloomberg TV Thursday. “We don’t want to make a single cent of profit” from programs to help companies through the crisis.

While governments and central banks are deploying vast amounts of money to protect their economies from the crippling lockdowns, they need commercial lenders to go the last mile and extend credit to companies and consumers. The banks, Ermotti said, are “there to function as a mechanism for policy makers to transmit the liquidity that is necessary at this stage.”

Pressure on banks has been mounting to suspend or delay shareholder payouts and bonuses in order to free up more capital for loans. A group of former central bankers and regulators has written to the G-20 to say that lenders should “immediately cease all equity buybacks and dividends, and should be ready to suspend bonuses to a thick layer of senior and other highly remunerated staff in order to maximize their capacity to lend.”

Some senior European officials say in private they’re aware that rolling back so many post-crisis demands could threaten the rigor they have instilled since the 2008 credit crunch. Still, they’ve been careful not to give in to all the demands of the bankers for fear that they would be sewing the seeds of the next crisis.

Banks’ clients, meanwhile, have started to draw down existing credit lines, even if they don’t immediately need them. Borrowers worldwide have tapped $200 billion in revolving and new credit lines since March 9 to combat the coronavirus crisis impact.

“They are trying to secure their liquidity and sometimes with no real need but as a way to gain even more confidence,” , CEO of French lender , said last week. “But it is in a relatively irrational way.”

For borrowers who lived through the credit crunch 12 years ago, asking for cash now may not be so irrational after all. They may be worried that, despite all the talk about being part of the solution, banks could again use the crisis to justify scrapping credit lines.