Stimulus loans meant to help small businesses hurt by the coronavirus pandemic are being doled out to coal companies, stoking criticism from environmentalists that the Trump administration is using the aid to help a preferred industry that was already in financial trouble.

The has given more than $31 million in loans from the Paycheck Protection Program to publicly-traded coal mining companies, according to filings.

“The question is, is this a good use of taxpayer dollars when we have other businesses closing their doors? What is the long term viability of this industry?” said Jayson O’Neill, director of the Western Values Project, a Montana-based conservation group. “I would argue we should focus first on the small businesses that are in the most need.”

Among the recipients are , and 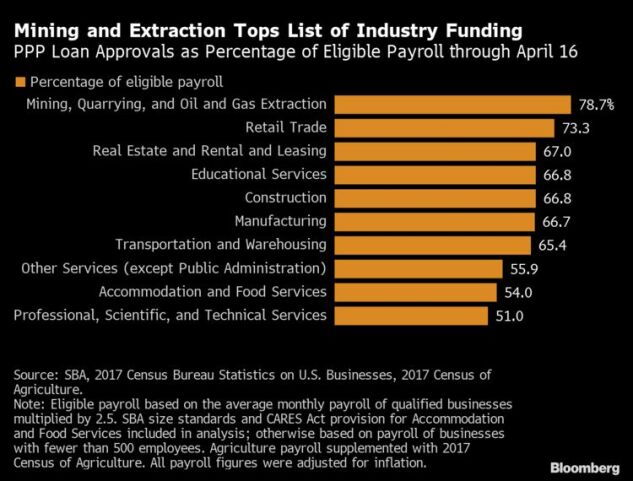 The stimulus program has drawn criticism for other awards, including loans to , and the . while millions of mom-and-pop firms were left stranded when the program ran out of money. All three have since returned the money amid an outcry.

The coal company funding came after the industry successfully lobbied the administration to add the sector to its related to Covid after being left off the original version, arguing coal was “critical to supporting hospitals, health care providers and others on the front line.”

The industry, which also asked for aid in March arguing that coal is “absolutely critical” and should be preserved for national security reasons, says there is no reason why coal miners shouldn’t be recipients of stimulus funding.

In fact, the mining industry, which includes coal and other minerals as well as oil and gas extraction companies, tapped the first, $349 billion installment of the Paycheck Protection Program at a higher rate than other industries, a Bloomberg News analysis of payroll data found. Approved PPP loans covered more than 78% of the industry’s eligible payroll compared to an average for all industries of 52%.

One possible explanation is that SBA classifies many mining and extraction companies as small even if they have more than 500 employees, the standard for most other industries. Bituminous coal underground mining businesses, for example, can have as many as 1,500 employees and still qualify for PPP loans. Overall, the mining sector got 1.14% of Paycheck Protection Program loans, according to SBA data through April 16.

“The industry is experiencing many of the same challenges confronting so many other industries and deserves the same support,” said , a spokeswoman for the . “The program is intended to keep Americans employed and these funds will contribute to the industry’s efforts to safeguard the jobs of 116,000 Americans directly employed at our nation’s coal mines.”

Jennifer F. Kelly, a SBA spokeswoman, said it “is following the law as it executes the PPP program as defined by the Cares Act passed by Congress.”

Lexington, Kentucky-based Ramaco Resources received an $8.44 million loan on April 17. The company, which has 395 employees and didn’t respond to a request for comment, said in a it would use the funding to recall about one-third of its furloughed work force and reopen a mine May 1. The company’s chairman, , serves as vice-chair of the National Coal Council, an advisory committee to the secretary of energy.

In some cases, companies with ties to the Trump administration have received aid.

Rhino Resource Partners, which has 605 employees and is also based in Lexington, Kentucky, received a $10 million stimulus loan, the maximum allowed under the PPP program, according to a company . President tapped the company’s former chief executive officer, , to serve as head of the nation’s mine safety agency in 2017. The company didn’t respond to a request for comment.

American Resources, an Indiana-based mining company, received a $2.7 million loan on April 22, according to a . The company, which has 147 employees, was vaulted into national news headlines earlier this year after workers at one of its mines in eastern Kentucky blocked a loaded coal train from moving by camping out on train tracks after claiming they hadn’t been paid for weeks.

“During these unique and trying times, we are taking the opportunity to keep people working and are actively taking this opportunity to advance our environmental efforts as well as maintenance of our existing operations to put us in a position to grow our infrastructure platform once we get past Covid-19,” , the chief executive officer of American Resources, said in a statement.

Coal miner and seller Hallador Energy, which hired former Administrator as a lobbyist last year, received a $10 million stimulus loan last month. The company has 915 employees, according to SEC data. The company didn’t respond to a request for comment.

“The Paycheck Protection Program was set up to help working families keep the lights on and put food on the table, not enrich corporate shareholders,” said Ryan Schleeter, a spokesman for environmental group , which has opposed using stimulus funds to aid the fossil-fuel industry.

The reported in early March that American coal use plunged more than 13% in 2019, the most in 65 years, as power plants shut down across the country.

At least one opponent of the coal industry says its receipt of Paycheck Protection Program funding defies the purpose of a program established to help businesses survive the economic downturn brought on by the pandemic.

“The coal industry stands out as the member of the fossil fuel herd that was uniquely sick before Covid ever hit and is even worse off after. So this isn’t a bailout -- that would require strong economic fundamentals in the first place,” said Justin Guay, director of global climate strategy for the Sunrise Project, an environmental group. “This is a bonfire -- we’re just literally lighting our taxpayer dollars on fire because they will go bankrupt regardless. It’s just a matter of time.”

To contact the reporters on this story:
in Washington at anatter5@bloomberg.net;
in Chicago at jgrotto2@bloomberg.net