plans to reopen its New York headquarters to a small number of employees as soon as July, and workers will return to London offices even earlier, as Chief Executive Officer gingerly pushes the bank forward into a world reshaped by the coronavirus pandemic.

“It’s going to be driven by data, it’s likely to be slow, it’s going to be granular, site-by-site and within those sites, job-by-job,” Corbat said in a Bloomberg “Front Row” interview. On a follow-up phone call, he said sometime in July or possibly August is when Citigroup hopes to return about 5% of the 12,000-odd staff at its main building in Manhattan’s Tribeca neighborhood. Re-entry will begin next month at the Canary Wharf complex in London.

That timetable makes Citigroup one of first big banks to give clear guidance on one of the biggest dilemmas posed by the global outbreak: when to send people back to work. While the company has kept a few hundred essential employees on site since skyscrapers across New York cleared out in mid-March, the return of even a few bankers or traders from vacation homes in the Hamptons and the Rocky Mountains would send a signal that Wall Street is finding its footing again. 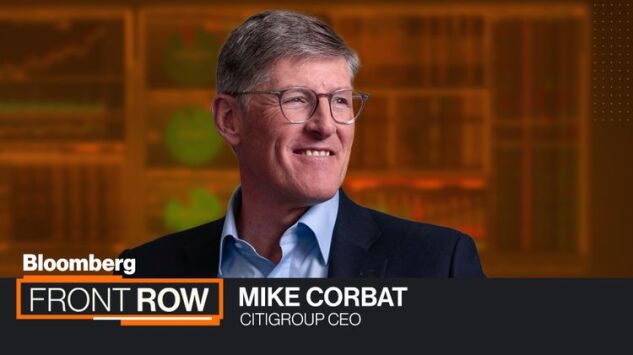 Mike Corbat, Citigroup chief executive officer, discusses how the Covid-19 pandemic is changing the way his company operates, and the longer-term consequences for business, the economy and government policy.
Source: Bloomberg)

New York, until recently the hottest hot spot for coronavirus, has used social distancing, mask-wearing and increased testing to dramatically reduce its infection and death rates. Now, like CEOs around the world, Corbat is trying to balance the demands of his business with the dangers of returning to old norms too quickly.

In Hong Kong, where the pandemic has been more contained, Citigroup only recently increased staffing to 50%. In London, some of the company’s 5,000 employees will start returning next week as part of a plan to repopulate offices by less than 10%.

Yet Corbat was clear he doesn’t envision a virtual bank. Offices are necessary both for face-to-face meetings and because banking is an “apprenticeship business” that requires human interaction, he said. That’s why Citigroup is re-examining everything from turnstiles to cafeterias to elevators and is considering new locations in the New York suburbs for employees “who might be uncomfortable getting on mass transit” until a vaccine is widely available.

JPMorgan Chase & Co. has said that offices will be staffed at no more than half of capacity for the foreseeable future. Bank of America Corp., meantime, plans to notify employees at least 30 days before they’re scheduled to return. Corbat, too, said he has told his workforce of 200,000, “You’re not going to wake up one morning or go to bed one evening with a blast email saying, ‘Tomorrow’s the day to come back.’”

As much as it stirs anxiety, plays into political debates and captivates the public’s imagination, the question of when and how quickly to reopen is just one of the challenges Citigroup faces. Corbat also is wrestling with collapsing growth, record unemployment, rising tensions over global trade and the consequences of unprecedented aid and intervention by governments and monetary authorities.

Citigroup added almost $5 billion to its bad-loan reserves in the first quarter, mostly in preparation for potential consumer defaults in the months ahead. At the same time, the bank may struggle to make money on new loans now that interest rates are near zero again and the Federal Reserve is considering yield-curve manipulation to keep borrowing costs down.

Even less clear are the longer-term implications of ballooning deficits and central bank balance sheets.

“We do not want our government in the U.S. or other governments to come out in a position where the debt at the federal level is untenable,” Corbat said. “We’re likely to be in this slower-growth environment for an extended period of time.”

A decade ago, Citigroup was in no position to warn about imprudence. After loading up on risky debts and derivatives before the financial crisis, the bank needed two federal bailouts and became a poster child for Wall Street recklessness. At bottom, its shares lost 97% of their value.

Now, Citigroup has comparatively ample capital and liquidity, and even during a pandemic Corbat is still thinking about expanding in Asia. Growing distrust of China in the West hasn’t curbed his ambitions there, nor has the Chinese government’s recent move to curtail rights and freedoms in Hong Kong.

“China remains a very important place for a big number of our clients and so we’re going to make sure we’re there to support them,” Corbat said. “Between some of the political challenges and the health-care challenges, it hasn’t been easy, but we remain committed to Hong Kong.”

(Adds details on plans for London offices in sixth graph.)