The world’s biggest banks have set aside $78.8 billion so far this quarter for an expected increase in bad loans as lockdowns to combat the spread of the coronavirus raise the specter of large-scale corporate defaults.

U.S. banks were among the most aggressive, with nine of the biggest earmarking $32.5 billion. Europe lagged behind, with 13 of its largest banks that have reported results so far putting away $17.9 billion. Lloyds Banking Group Plc on Thursday said it set aside about $1.8 billion and France’s Societe Generale SA warned its provisions could reach more than $5 billion this year in the worst case. 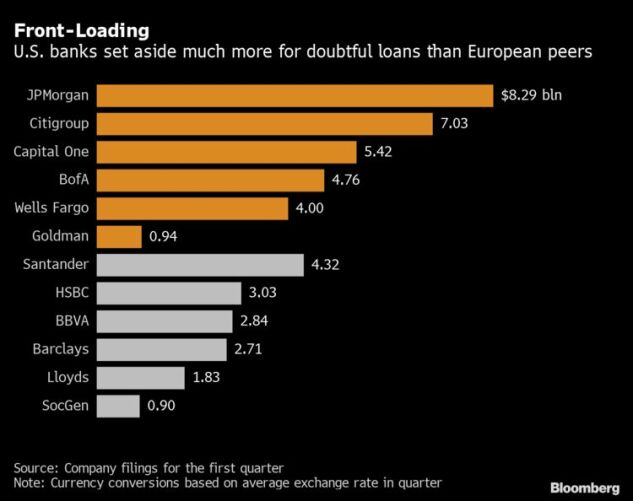 The figures are an early indication of the damage the crisis is expected to inflict on lenders across the globe, but there are many variables that can make them difficult to compare. Banks in the U.S., for instance, have been more profitable than European lenders and can afford to take a significant hit upfront. Some of them are also more exposed in areas such as credit card debt and lending to oil and gas companies.

In Europe, HSBC Holdings Plc and were among the most aggressive, with HSBC saying credit losses could swell to $11 billion this year. Eurozone lenders heeded a call from the to avoid a sharp increase. The ECB has encouraged lenders to be flexible in applying accounting standards, recognizing both their relative weakness and their systemic importance in a region where companies still depend largely on bank lending rather than capital markets for funding. 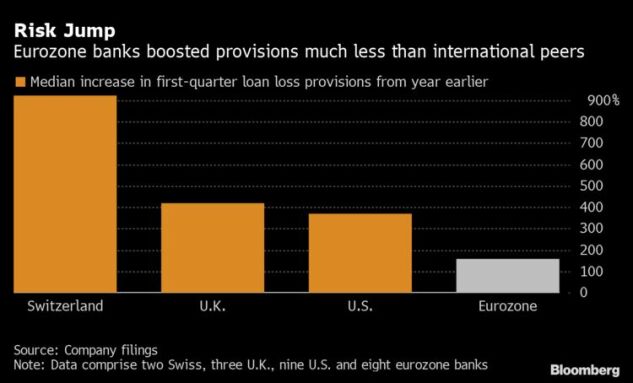 Several European banks pointed out that they had reduced lending to oil-and-gas producers in recent years. SocGen, which is among lenders exposed to troubled Singapore oil trader Hin Leong Trading, put aside 820 million euros in the first quarter. Banco Bilbao Vizcaya Argentaria SA of Spain, which has a lot of business in Latin Ameria and Turkey, said impairments more than doubled to 2.6 billion euros.

Others like touted the “high quality” of its borrowers -- many of them millionaires with assets to back their loans, even if the value of those assets has recently fallen.

Governments have also made life easier for European banks with wide-ranging guarantees and payment stays extended to corporate and consumer loans. , which took a relatively small hit, said it was comfortable doing so because many of its corporate clients are small and medium-sized German businesses that benefit from one of the world’s most extensive aid packages. 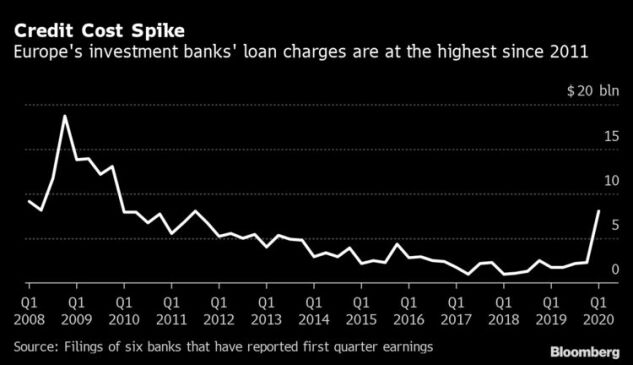 Despite the relief, Europe’s top investment banks are still on course for the highest level of loan loss provisions in years, with more to come over the next quarters. Deutsche Bank said it expects provisions to peak in the second quarter. But as the crisis ripples through the economy, there’s a high degree of uncertainty, particularly for banks that have taken relatively benign provisions so far.

“We might see a further reserve build in the coming quarters,” said Chief Executive Officer .

In China, where the virus hit first, regulators have also allowed banks to take a more lenient approach on how they classify bad debt. The country’s banks had already been grappling with a growing pile of bad loans for several years and saw a slight increase in their share of overall credit in March. That increase was limited by lenders agreeing to let small businesses defer payments and roll over debt. 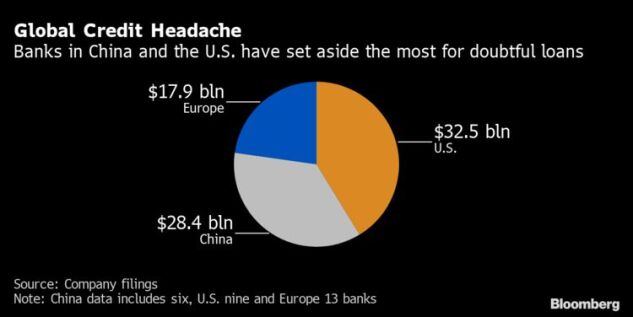 To contact the reporters on this story:
in Frankfurt at ncomfort1@bloomberg.net;
in Zurich at mhalftermeye@bloomberg.net