Wall Street in the post-lockdown era is starting to take shape.

Big banks are preparing offices meant for thousands to house a fraction of that number, with some of those displaced employees relocating to suburban outposts and some working from home indefinitely.

expects to keep its offices at the most for the “foreseeable future,” and is reopening its Paris office with a maximum of of staff allowed in on any given day. is considering in New Jersey and the New York suburbs of Westchester County and Long Island.

The world’s largest banks have been studying how best to safely bring employees back to work once restrictions put in place to stem the spread of Covid-19 are lifted. Existing office configurations are ill-equipped to keep workers far enough apart to meet social-distancing guidelines, and cramped mass transit systems won’t work for those facing long commutes. 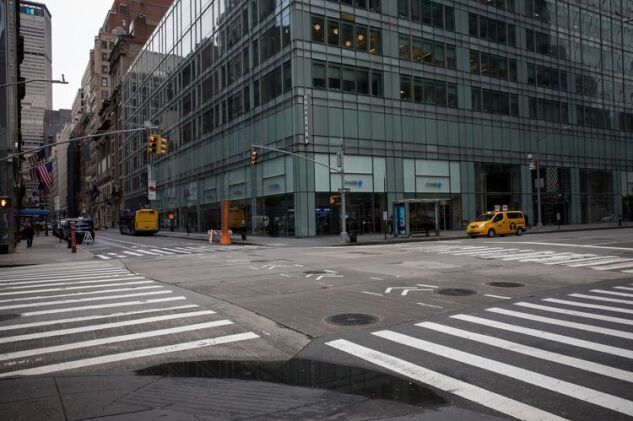 “It’s very difficult to imagine large numbers of people flocking back to Manhattan in these tall high-rise buildings where they might have to wait a couple of hours just to ride the elevator,” Darin Buelow, a principal at Deloitte Consulting and leader of the firm’s global location-strategy business, said in an interview.

At JPMorgan, some staff will be sitting at different desks, and in some cases different floors, when they get to work and flexible seating arrangements are enacted, according to an internal memo that was sent Wednesday to employees in the Europe, Middle East and Africa region. Similar notices were sent to U.S. workers other than branch staff, a person familiar with the matter said.

In addition to Paris, Goldman Sachs is also reopening outposts in Frankfurt, where its 300-strong team has been divided into three groups that can rotate between working from home and two of its buildings in the city. The firm’s offices in Madrid, Tel Aviv, Warsaw, Stockholm, Milan and Dublin are also getting back in operation, with each adopting new safety protocols.

Workers must keep two meters away from others in the office, and conference rooms can only be used by a single person. The bank has also spaced out seating, reduced elevator capacity and banned visitors and client meetings.

“Returning is in no way mandatory and everyone is encouraged to adopt an approach that works for them,” the company said in an internal memo seen by Bloomberg.

Measures to protect workers are also being implemented in London’s Canary Wharf financial district, which houses the European headquarters of banks including HSBC Holdings Plc, Barclays Plc and JPMorgan. The landlord that operates the district said last week that returning workers can expect and no more than six in an elevator.

In the New York region, real estate brokers and landlords with suburban offices have seen a surge in interest from the finance industry, in addition to media and technology companies and law firms.

Rubenstein Partners, which owns office space in northern New Jersey and Stamford, Connecticut, has gotten inquiries on several hundred thousand square feet of office space, mostly from New York-based companies, according to Brandon Huffman, a manager at the firm.

“There’s an overwhelming number of employees that need mass transit to access the urban environment,” he said. “Nobody knows how that’s going to work in a social-distancing world.”

Those who do make it back will find a world lacking many of the personal touches that helped make their workspaces more homey. JPMorgan has been placing workers’ personal items into sealed boxes to prepare desks for common use after lockdowns begin to ease.

“As we prepare for this level of flexible seating and put protocols in place for all areas to be cleaned and disinfected effectively, we have started clearing all desk surfaces and floor areas of any personal and business-related work items,” JPMorgan said in the memo. “We know how important your items are and will continue to make every effort to treat them with care.”