, , Carmax Inc., and a regional electronics retail chain have something in common: They’re affected by new accounting rules designed to make banks own up to losses on loans before they go bad.

None of them are banks. But because a large part of their business involves extending credit to customers to buy their cars, trucks, and flat-screen TVs, they have to recalculate and increase loan-loss reserves like banks do. GM has disclosed that it expects to have to set aside another $500 million to $700 million; Ford, an additional $200 million, and Carmax, $200 million to $250 million, which more than doubles its reserves.

Several other companies— and , among others—have only hinted at the effect and are expected to give details in their upcoming fourth-quarter financial results.

Financing is a much smaller portion of how these companies make money compared to banks; GM increasing its $933 million reserve by 75 percent would still be a tiny slice of its more than $53 billion in financial receivables. Still, the new accounting standard known as current expected credit losses (CECL) will bring out new details about companies’ exposures to credit risk, especially at those that offer financing to customers with shaky financial histories.

“Banks were the ones raising all the noise and raising hell and a lot of people thought, ‘Well, this doesn’t apply to me’,” said Peter Bible, chief risk officer at Eisner Amper LLP and former chief accounting officer at GM. “They couldn’t be more wrong.” 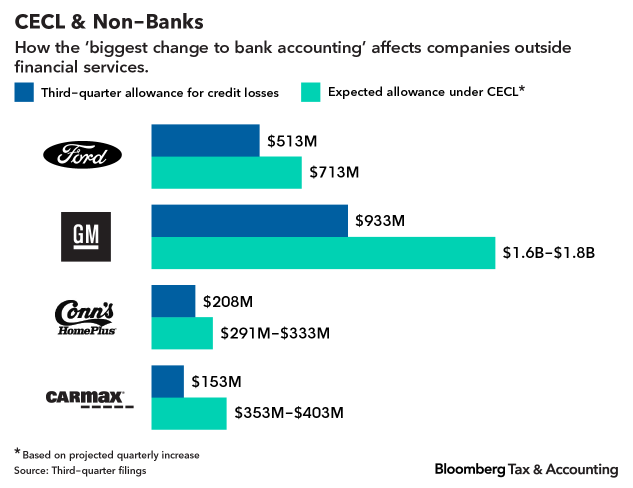 The impact of the new rules, which go live for public companies in the first quarter of this year, will depend on how the markets interpret this newfound focus on credit. If companies have to accelerate the losses they book, analysts may question why they expect to take big losses and whether there are hidden risks in the financing they offer.

The amount of a company’s business that comes from financing will play a significant role. Loans to customers through Harley-Davidson’s financial division, for example, now account for more than 40% of the company’s operating income compared to less than 15% a decade ago. In addition, 18% of the company’s loans are considered subprime. Taken together, the new accounting change looms large for the iconic motorcycle manufacturer, UBS analyst Robin Farley wrote in a note in October.

Nothing changes economically —loans to Hog enthusiasts will either be repaid or become losses— “but what changes is the earnings power” of Harley-Davidson and its leverage, which could reduce earnings per share and could affect lending, she wrote.

Harley-Davidson in its third-quarter filing said it was evaluating the effect of the accounting change but expected to increase its reserves, which could cause its retained earnings to decrease.

David MacGregor, chief executive officer of Longbow Research, who covers Harley-Davidson, said most of his peers will view CECL as a one-time, non-cash adjustment. But all that could change if the economy tanks.

If a company leans on extending credit to bolster its revenues and has to reach for riskier customers with lower FICO scores, it will have to beef up its loss reserves. If increasing reserves makes the company queasy about extending credit, that could be a problem, MacGregor said.

“Now that would impact the price of stock,” he said. “So these are all the derivative issues that orbit around this CECL thing.”

. the Texas-based electronics chain, disclosed in a filing in December that its reserve for credit losses would have to increase by 40% to 60% under the new accounting rules. It offers in-store financing primarily to customers with little or tarnished credit history.

The accounting change won’t change the fundamental economics of the business; the company will still collect the same payments from customers buying washing its machines and TVs and will still generate the same interest income on those purchases. CECL, however, will put a spotlight on this business model, said Noel Herbert, director of credit research at Bloomberg Intelligence.

“It doesn’t necessarily add insight to the credit risk, but more reminds people of it,” Herbert said.

Caterpillar so far has said the accounting change would have no material effect. Deere & Co., the maker of John Deere tractors, doesn’t have to comply with CECL until the beginning of 2021 because its fiscal year starts in November, not January, like many companies.

The accounting change has largely been off the radar of analysts and investors who don’t focus on banks. Not a single analyst asked Ford, GM, Carmax, or Conn’s on recent earnings calls about the estimates the companies have included in their financial statements. More pressing issues—like new products, tariffs, and the strikes at GM—dominated the calls.

When reached by Bloomberg Tax, some analysts who cover the automakers essentially shrugged when asked if the CECL disclosure affected how they viewed the companies. It’s just that, they said—an on-paper accounting change. It doesn’t change the fundamentals of how the companies lend or how much money they make on car loans.

All of this is true. Accounting rules aren’t designed to change the economics of a business but to reflect it. Developed in the aftermath of the 2008 financial crisis, accounting rulemakers designed the new credit losses standard to give investors better insight about loans before they go sour. The rule requires businesses to look to the future, consider past experience, and assess current conditions to calculate credit losses instead of waiting for customers to miss payments.

Sometimes, though, an accounting change sheds light on a company’s finances in a way that prompts investors to ask questions and managers to make changes.

Morgan Stanley & Co. LLC analysts in a note in December highlighted how the accounting change could bring more scrutiny to the financial health of mall staples like Macy’s Inc. and Dillard’s Inc., which they said have become overly reliant on income from store-brand credit cards.

These brick-and-mortar department stores are already under threat from the rise of off-price retailers like TJ Maxx and online competition from Amazon.com Inc. Changes in credit risk could “meaningfully” impact overall earnings per share once the new accounting takes effect, they said.

The accounting also will draw eyeballs to the ups and downs of credit losses. The buzzword: Seasonality.

Analysts use the word to describe businesses that make money in certain times of the year versus others. Think of retailers in the stretch between Black Friday and Christmas. Seasonality applies to big-ticket purchases like vehicles, too, said Laurent Birade, senior director, regulatory and accounting solutions at Moody’s Analytics.

“People get crazy at Christmas,” Birade said. “They buy a big car they can’t afford. Lo and behold, less than a year from now, sometimes even in three or four months, you start seeing defaults.”

Farm equipment manufacturers know all about seasonality. When farmers’ corn crops do well, they buy a new tractor or combine harvester for the next year. When farmers get hurt—from weather, pests, or bad luck—loan payments slip.

The new accounting will make companies assess all these potential ups and downs in their business to make reasonable estimates about the losses they expect, a major change from current practice.

“Anything that has a lot of seasonality will now be reflected in the loan loss allowance, which was never reflected before,” Birade said. “It’ll be a paradigm shift.”

The ultimate effect of CECL on non banks boils down to how the economy performs.