The Federal Reserve is studying whether a digital dollar would reduce barriers and transaction costs to “unbanked” consumers who lack access to traditional financial services such as checking accounts or loans.
Chris Ratcliffe/Bloomberg via Getty Images

The debate over whether the Fed should roll out a digital US dollar has led to a rare alignment among banks, consumer advocates, and lawmakers who are skeptical of claims that the currency would boost financial inclusion for lower-income Americans and minorities.

Federal Reserve officials have suggested that a digital dollar would reduce barriers and transaction costs to “unbanked” consumers who lack access to traditional financial services such as checking accounts or loans. It’s an argument that cryptocurrency enthusiasts have been making for years about bitcoin and other private digital offerings.

But skeptics say a Fed-issued digital dollar would potentially deepen existing economic and technological divides, especially in communities where access to broadband and smart devices is limited and mistrust of banks runs deep.

Additional concerns have mounted over whether the Fed would use mainstream banks as intermediaries to distribute digital dollars to the public. Such a system has the potential to add fees and other barriers to financial inclusion, and could favor larger banks over smaller competitors.

“America has plenty of digital currency. Every swipe you make, you’re transacting in digital currency,” said Aaron Klein, a senior fellow at the Brookings Institution and a former Obama administration Treasury official. “Adding a new form of digital currency from the central bank does little to change the fundamental issues facing lower-income Americans.”

The Fed has not endorsed any plans for a digital dollar, which would likely require support from the White House and Capitol Hill.

But officials at the central bank have increasingly signaled their willingness to explore one in recent months, while touting financial inclusion as a potential benefit.

“Many consumers are also moving to payments methods outside the banking system because they’re accessible,” Fed Vice Chair Lael Brainard told the House Financial Services Committee last month, adding that fintechs are less likely to require minimum deposit amounts to open an account than traditional financial institutions. “So, it’s possible that a digital dollar issued by the central bank could be part of an ecosystem that lowers transaction costs.”

A digital dollar also could “level the playing field” for smaller banks and financial firms that would otherwise struggle to compete in new payment markets, the Fed said in a recent white paper.

The Fed model would lean on banks by having them offer accounts, electronic wallets, and other tools for consumers to hold and use digital dollars. In that role, banks would still have to perform their regular compliance functions, including following know-your-customer and anti-money laundering rules.

The central bank said it would research whether it could issue a digital currency that could be accessed offline. But some experts say that access to technology—particularly the internet and smartphones and other devices that connect to it— would be essential for a digital dollar, a potential problem for rural and lower-income areas.

“This is a nut that we have yet to fully crack,” Robert Bench, an assistant vice president in charge of digital dollar research at the Boston Fed and a former executive at the crypto company Circle Internet Financial Ltd., said at a June 9 forum hosted by the central bank. “You want to make sure that those folks in America who don’t live in a place with internet access or may be outside of WiFi can use that technology, can use that public service, even if it’s intermediated through a bank or tech.”

Bank leaders haven’t embraced the idea of becoming custodians for digital dollars, which would likely pull business away from the regular cash accounts that banks rely upon to make loans—a crucial profit source.

That would drive up the cost of credit for households and businesses, undermining the digital dollar’s goal of financial inclusion by “limiting, rather than promoting, credit availability to the communities that need it the most,” the Bank Policy Institute other trade groups said in a May 25 letter to the House Financial Services Committee.

The Fed has said it could try to keep bank deposits competitive by declining to pay interest on digital dollar accounts and limiting the amount each customer could hold.

But banks say that would not be enough to stop a potential run on deposit accounts. A digital dollar would drain as much as $720 billion from bank deposits, even if each customer could only hold $5,000 in the digital currency, the American Bankers Association estimated.

Community banks have also voiced concern that a digital dollar would only make it harder for them to compete against financial behemoths like and . Smaller banks would face higher costs to implement the technology needed to manage digital dollar accounts, said Mickey Marshall, the director of regulatory legal affairs for the Independent Community Bankers of America.

A digital dollar could separate banks into “winners and losers” based on their size, he added.

“It certainly is going to privilege larger financial institutions and the less-regulated financial technology companies,” Marshall said. “They are going to be able to get their products to market sort of much quicker than community banks are and capture a big portion of this market before community banks can even begin to offer these wallets.”

Major payment processing companies, including and , which make money from transaction fees, have already begun to eye the central bank digital currency space.

“We’re actively involved and we really see us helping play a role in interoperability and connectivity between fintechs, financial institutions, and the central banks themselves,” Jack Forestell, executive vice president and chief product officer at Visa, said at the Evercore Payments & FinTech Innovators Forum in March.

Banks for the Unbanked

The path of a digital dollar between the Fed and consumers would likely look much like the current cash system. The central bank said it doesn’t have authority to directly manage consumer accounts and would, instead, work through banks and other institutions to distribute digital dollars to the public.

Critics say such a system wouldn’t help consumers who already lack access to deposit accounts because of high fees, balance minimums, and a deep-rooted wariness of financial institutions. 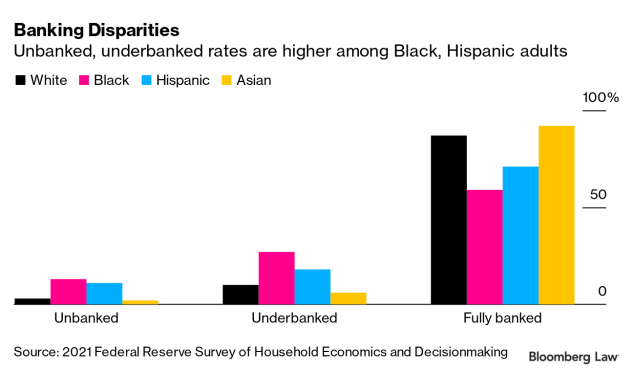 A recent Fed study found that 6% of US adults don’t have a bank account. Another 13% are considered “underbanked” because they frequently use check-cashing services, payday loans, pawn shops, and other alternative financial services despite having access to a bank account.

Unbanked and underbanked rates were higher among adults with lower incomes, those with less education, and Black and Hispanic adults, according to the study.

The Fed has raised the possibility of reaching the unbanked and underbanked by allowing financial technology companies and other non-bank firms to manage digital dollar accounts. But those institutions aren’t as tightly regulated as banks, raising concerns that some communities could be vulnerable to predatory lending.

Fintechs or other intermediaries shouldn’t profit “from the fact that they are providing services to traditionally underserved populations who maybe don’t have the ability to demand better treatment under the law,” said Hilary Allen, a banking law professor at American University.

Most fintech companies aren’t covered by the Community Reinvestment Act, a 1977 law that requires regulators to measure bank lending to low-income urban and rural areas.

Bank holdings of digital dollars probably wouldn’t be covered either, because the law only applies to deposits backed by the Federal Deposit Insurance Corp.

The Fed has indicated a digital dollar would exist alongside stablecoins: cryptocurrencies pegged to the US dollar or other fiat currencies. But it has also allowed that more regulation is needed in that market.

Some cryptocurrency enthusiasts have also come out against a digital dollar, which could affect demand for their products. In a May letter to the Fed, Circle said a central bank digital currency could “have a chilling effect on new innovations” and confuse consumers.

“Such an arrangement would add another layer of complexity to what many unbanked and underbanked individuals see as an already-confusing financial system and could negatively affect one of the key stated goals of a CBDC, namely promoting financial inclusion,” Circle said.

The Biden administration in March ordered the federal government to research a digital dollar as part of broader executive order on how to regulate cryptocurrency, saying digital assets could have “profound implications” for financial inclusion. On Capitol Hill, the digital dollar debate has cut across party lines, muddling the outlook for any legislative action.

Some congressional Democrats have asserted a digital dollar could serve underbanked and unbanked communities better than the private cryptocurrency market, which has seen volatile price swings in recent months.

“The people that are pushing crypto love to say that their job is to help take care of the unbanked,” Senate Banking Committee Chairman Sherrod Brown (D-Ohio) said. “I don’t know that they really have that interest.”

Congressional Republicans, meanwhile, are split over the need for a digital dollar, with some arguing it could threaten the private sector and others saying it’s needed to compete against other major economies like China. But most agree it would do little to lower barriers to the US financial system.

“I don’t see it as a game-changing element to increasing financial inclusion,” said Rep. French Hill (R-Ark.), a Financial Services Committee member who cosponsored a 2021 bill, H.R. 2211, that directed the Fed to study the development of a digital dollar.

“I see that as a possible benefit, but I think there are many other things that the existing financial industry could do that would be equal to or more successful,” Hill said.

To contact the reporter on this story: Gina Heeb in Washington at gheeb@bloombergindustry.com