Antitrust regulators around the world have signaled that they plan to take action to rein in Big Tech's expanding power.
Photo by Lionel Bonaventure/AFP via Getty Images

The House Judiciary Committee’s consideration of antitrust bills targeting big tech began Wednesday with bipartisan pledges to use legislation to break the hold that the largest companies have on the internet economy.

In its first action, the committee approved a bill revising the fees companies pay when they seek antitrust approval for mergers. It would increase fees for the biggest deals, and the money would provide additional funding for the Federal Trade Commission and the Justice Department to pursue antitrust cases.

“Each bill is an essential part of a bipartisan plan to level the playing field for innovators, entrepreneurs and startups and to bring the benefits of increased innovation and choice to American consumers,” Nadler, a New York Democrat, said in his opening statement.

Last year’s investigation was led by antitrust subcommittee Chair and ranking Republican , whose partnership has built remarkable bipartisan support for the six measures before the committee. Although the bills may have support to make it through the Judiciary Committee, it’s not clear that all of them could pass the House. And the Senate presents an even bigger hurdle because most legislation needs at least 10 Republicans to become law.

Cicilline, a Rhode Island Democrat, described the bills as a “direct and measured response” to the subcommittee’s investigation. He said that many of the businesses they questioned during that probe described how they feel “trapped” by the four big tech companies.

“Over and over, words like fear, bullying, and hardship, came up in interviews,” Cicilline said. “App developers, through third party sellers and even large publishers reported being victims of predatory behavior.”

Buck, a conservative Republican from Colorado, said the committee’s legislative response represents “a scalpel, not a chainsaw, to deal with the most important aspects of antitrust reform.” He said giving more resources and support to the FTC and Justice Department would “give small businesses a fair shot against oligarchs like and .”

“These monopolists routinely use their gatekeeper power to crush competitors, harm innovation, distort and destroy the free market and silence conservatives,” Buck said.

Though the proposals that most threaten the companies are unlikely to become law as written, they show that lawmakers are intent on finding a way to curb the dominance of tech behemoths and preview how they’re seeking to strengthen antitrust enforcement.

There were some early signs of division among the panel’s Republicans. Ohio Representative , the Judiciary Committee’s ranking Republican, said the bills under consideration wouldn’t address his main concern, what he describes as censorship of right-wing users and viewpoints, including former President Donald Trump.

In addition to the measure on merger filing fees (), the committee was scheduled Wednesday to take up:

Industry groups supported by tech companies have said that these proposals would hurt innovation and U.S. competitiveness and destroy products like iMessage and Google Maps that people like and depend on. Amazon has said the bills would hurt hundreds of thousands of sellers, including small businesses, that rely on its platform to reach consumers.

Apple wrote to the Judiciary Committee on Tuesday outlining what it described as negative effects on consumer choice if the House bills were to force changes to the iPhone and App Store.

“Apple is concerned that current proposals would harm consumer privacy, device security, and innovation,” according to the letter. “We urge the Committee not to approve the proposed legislation in its current form.” 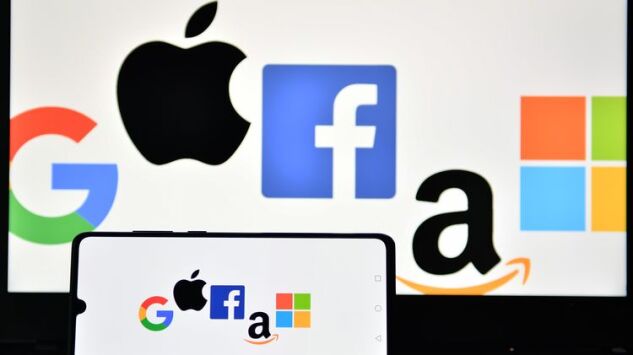 While 2021 returns vary widely for the big four in lawmakers’ sights, investors are hardly panicking over Congress’s intentions.

Google parent Alphabet and Facebook are both outperforming broader U.S. stock benchmarks, with year-to-date gains of 40% and 24% respectively. The underperformers are Amazon and Apple, up only 7.6% and 1%. 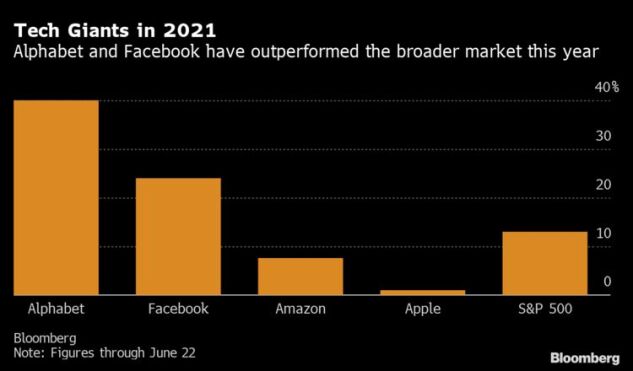 While the Senate Judiciary Committee’s antitrust panel has raised some of the same issues that the House bills seek to address, Chair has taken a broader look at concentration across the economy beyond the tech sector. She introduced a proposal in February that focuses on updating existing antitrust statutes to make it easier for enforcement agencies to bring and win cases.

Klobuchar, a Minnesota Democrat, has said she’s willing to break that measure into smaller pieces that might have a better chance of getting enough bipartisan support to become law, but she hasn’t joined the House’s legislative focus on a small number of powerful tech companies.

The proposals are a good first step, according to , who led the Justice Department’s antitrust division under Obama. Baer said bringing antitrust cases can be a long and sometimes fruitless pursuit for enforcement agencies, and the House bills are an attempt to reverse decades of lax enforcement and decisions by conservative judges.

“What the legislation in the House recognizes, and legislation in the Senate as well, is that we do have a monopoly problem in the tech sector, that these markets seem to allow for development of and persistence of market power, with adverse effects on competition, on the consumer,” Baer said.